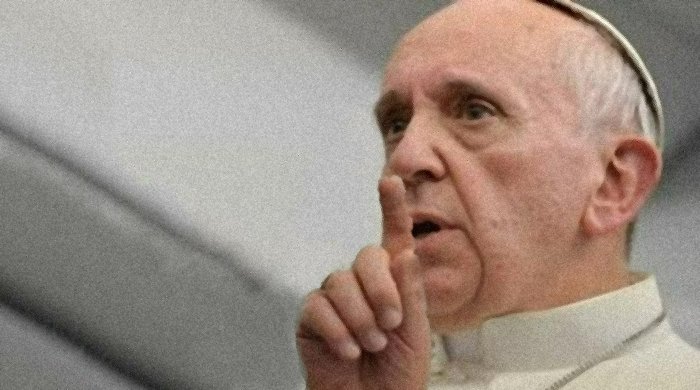 On August 20, the Vatican published a “Letter of His Humbleness Francis to the People of God” written in light of the homo-clerical scandal.

The overall theme of the letter is established in its opening sentence; words taken from the First Epistle of St. Paul’s to the Corinthians: “If one member suffers, all suffer together with it” (1 Cor 12:26).

The Bergoglian exegesis that followed is just as expected; an earthbound bastardization that has little or no foundation in truth.

“These words of Saint Paul forcefully echo in my heart as I acknowledge once more the suffering endured by many minors due to sexual abuse,” Francis declared.

Once more?  Apparently he is convinced that “the People of God” have forgotten how he thumbed his nose at those who informed him of the homo-shenanigans of Chilean Bishop Juan Barros.

Readers may recall that Barros is accused of engaging in homosexual acts with the now convicted sex abuser Fr. Fernando Karadima in the presence of minors. When asked by a reporter to comment on the matter back in January, Francis claimed, “No one has come forward.”

This, as even the Jesuit America Magazine suggested, was a lie. (See HERE.) He then went on to lash out at Barros’ accusers; charging them with slander:

We have to be clear about this: anyone who accuses without evidence, pertinaciously, this is slander.

[Yes, you read that correctly: The pertinacious heretic Bergoglio actually used the word “pertinaciously.”] It was only in response to the considerable backlash that ensued that Francis backed off; i.e., he went into damage control mode.

This is exactly what we see in this letter as well.

Francis went on to mention the revelations made public “in recent days,” apparently referring to the Pennsylvania Grand Jury Report that details, among other things, the slippery behavior of bon vivant Bergoglian insider, Cardinal Donald Wuerl –  a man openly accused of lying by the PA Attorney General.

So, how is Jorge going handle this one? Simple – by denying the extent to which this crisis is a present reality; suggesting that it is little more than water under the bridge:

Make no mistake; this phrase is one of the keys to reading the letter and it’s nothing new. The “party line” out of Rome has long been that the homo-clerical abuse scandal is but an unfortunate page in the conciliar church’s history; one that has been largely handled.

Francis went on to shed crocodile tears over “The heart-wrenching pain of these victims, which cries out to heaven…”

Here we have yet another instance of quasi-biblical Bergoglian balderdash as Sacred Scripture does not list the pain of victims as that which cries out to heaven, but rather four sins in particular – in the present case, homosexuality.

This is far from just a subtle attempt to add linguistic appeal to a pathetic text; it is a deliberate attempt to reroute the focus of “the People of God” away from the conciliar church’s homo problem, and, ultimately, away from God Himself.

Francis went on to suggest that the problem to this point, and therefore the solution, involves not just those members of the homo-archy who either committed or covered-up these grave sins, but rather all of us!

With shame and repentance, we acknowledge as an ecclesial community that we were not where we should have been … every one of the baptized should feel involved in the ecclesial and social change that we so greatly need … It is impossible to think of a conversion of our activity as a Church that does not include the active participation of all the members of God’s People.

You see, as far as Bergoglio is concerned, the issue isn’t so much that homo-predators and homo-sympathizers are legion among the clergy, much less is it the abandonment of faith that has come to define the conciliar church, it is those who hold a traditional view of the Church and her sacred ministers.

Clericalism, whether fostered by priests themselves or by lay persons, leads to an excision in the ecclesial body that supports and helps to perpetuate many of the evils that we are condemning today. To say “no” to abuse is to say an emphatic “no” to all forms of clericalism.

Leave it to Jorge to twist the homo-clerical scandal into a tool for dragging the Church even further down to earth.

More could be cited from this loathsome letter, but we’ll wrap it up with the following:

Saint Paul’s exhortation to suffer with those who suffer is the best antidote against all our attempts to repeat the words of Cain: “Am I my brother’s keeper?” (Gen 4:9).

The Devil is so subtle, and likewise his servant, Jorge! No, St. Paul did not exhort the faithful to “suffer with those who suffer.” Rather, he taught an immutable truth:

In other words, the true members of Holy Mother Church (as opposed to Jorge Bergoglio and others like him who calculate and scheme against her) – do indeed suffer in accordance with the sufferings of the other members of the Mystical Body of Christ. They may not know it, or feel it, but it is real and unavoidable just the same.

In Jorge’s world of earthbound, fleeting, and ultimately meaningless emotionalism, simply acting as if we share the wounds of those who have been victimized, declaring just how sad we are at their suffering, is “the best antidote.”

Nonsense. The best antidote to every evil is the one true faith fully taught, embraced, and lived; something that the Captains of Newchurch absolutely refuse to do, and until such time as that ceases to be so, rest assured, nothing is going to change for the better.

The Strange Case of Archbishop Nienstedt – Part One