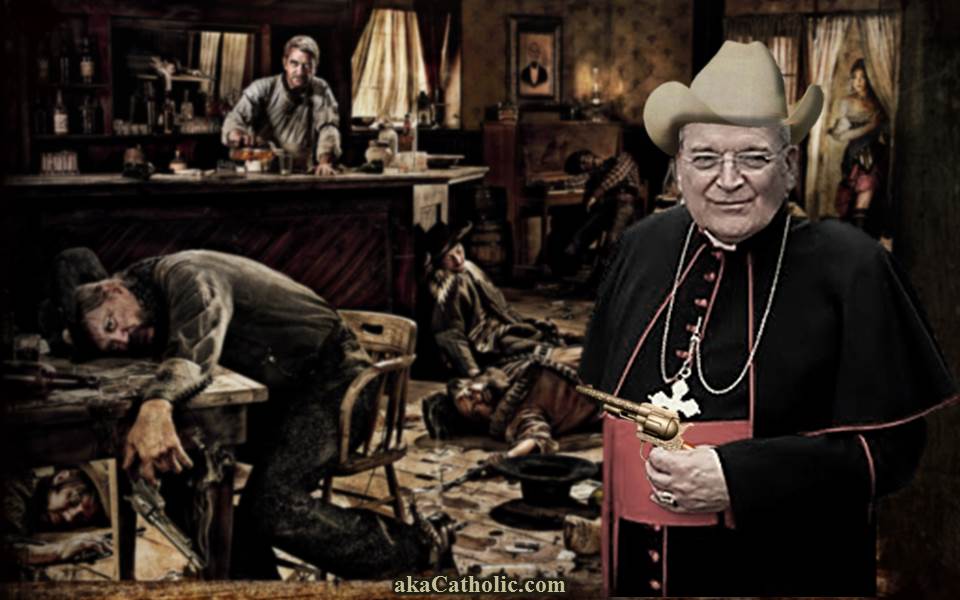 His Eminence Raymond Leo Burke, God love him, seems to genuinely want to do the right thing, but he has a serious problem; he is a cardinal conflicted.

On the one hand, he is deeply devoted to the Traditional Latin Mass, the immutable doctrines of the Faith as taught throughout the centuries, and the Blessed Virgin Mother.

On the other, he is blindly willing to assume the inherent goodness of the Novus Ordo Missae, the wisdom of the Second Vatican Council, and the veracity of Rome’s official position on Our Lady of Fatima.

In other words, he is the poster prelate of disoriented neo-conservative Catholicism; a walking contradiction.

As such, when it comes to Amoris Laetitia, one can hardly be surprised to notice that, in spite of his good intentions, Cardinal Burke is beginning to resemble a drunken cowboy engaged in a gun fight with some very bad men in a crowded saloon; often dangerously way off target, but also occasionally (even if perhaps inadvertently) squarely hitting the mark as well.

In his latest interview (as of this writing, anyway), this one with the Italian publication, La Verità, (complete translation courtesy of Andrew Guernsey available HERE), Cardinal Burke made some interesting claims; the first to jump out being found in the headline:

There is no ultimatum to the Pope, but we must go forward: the faith is in danger

Just as one may have expected, this is about half-right.

First, let’s be clear: The dubia most certainly is an “ultimatum;” a proposal that essentially demands, “Do this, or else suffer the consequences.”

Cardinal Burke has made it clear on a number of occasions that a failure on the part of Francis to directly answer the dubia will result in “an act of formal correction.”

His deliberate and repeated use of the word “formal” strikes me as one of those “on target” moments; even if he doesn’t intend it as such.

I mean, isn’t it just common sense that “formal” corrections are reserved for “formal” errors (more properly in the present case, heresies) as opposed to those that are simply “material” in nature?

In any event, Cardinal Burke has never shied away from this threat.

In fact, in the La Verità interview, he cited Aquinas while once again saying, “In this case [of a pope falling into error, with the clear implication being that this is what he believes Francis has done], a correction must be made.”

As for the faith being in danger, well, duh!

This statement was offered in direct opposition to claims recently made by Cardinal Gerhard Muller in an interview that was broadcast on Italian television. (Is there anyone in Rome able to resist the seductive allure of the media?)

Specifically, Muller said that a correction of Francis isn’t warranted because “there is no danger to the faith.”

Since then, the indefatigable Edward Pentin of National Catholic Register reported:

One informed official recently told the Register that a CDF committee that reviewed a draft of Amoris Laetitia raised “similar” dubia to those of the four cardinals. Those dubia formed part of the CDF’s 20 pages of corrections, first reported by Jean-Marie Genois in Le Figaro on April 7, the eve of the publication of the document.

Another senior official went further, revealing to the Register last week that Cardinal Müller had told him personally that the CDF “had submitted many, many corrections, and not one of the corrections was accepted”. He added that what the cardinal states in the interview “is exactly the contradictory of everything which he has said to me on the matter until now” and he had the “impression of someone who was not speaking for himself but repeating what someone else had told him to say.”

With all of this in mind, it seems reasonable to suspect that Cardinal Muller’s about face is the result having been threatened to “toe the company line, or else” (speaking of ultimatums).

Given that the wolves somehow managed to convince Benedict XVI, not only to flee, but to offer public support for the Argentinian madman who daily goes about attacking the very doctrines and liturgical traditions he once championed, one can hardly be shocked.

With respect to the future, Cardinal Burke said:

I do not want to make any speculation about possible next steps to be taken for the initiative that we have undertaken. If we do it, we will do it after having confronted [Francis, privately].

OK, fine, but in his previous interview with Michael Matt, Cardinal Burke did more than merely speculate about what may come next.

He said that “the truths that seem to be called into question by AL would simply be placed alongside what the Church has always taught and practiced and annunciated in the official teaching of the Church. And in this way these errors would be corrected.”

QUESTION: When someone is Hell bent on promoting errors that call into question what the Church has always taught and practiced, what is that called?

Readers may recall that Cardinal Gerhard “no-danger-to-the-faith” Muller, following the Extraordinary Synod of 2014, gave us the answer when he warned:

“Each division between ‘theory’ and ‘practice’ of the faith would be a reflection of a subtle Christological heresy.”

The La Verità interviewer invited Burke to connect those very same dots, but he refused to go there, saying:

…it is not possible to receive the sacraments for a person who is living more uxorio [as husband and wife] with someone who is not his or her spouse. To claim instead that this is possible constitutes a formal error that goes against what Jesus himself taught and has always been the teaching of the Church.

The interviewer pressed, “Therefore, to claim this is a heresy?”

No, it seems to me that it can qualify as an error, but we are dealing with a complex situation. Heresy is the obstinate denial or obstinate doubt, on the part of the baptized, of a truth that one must believe by divine and Catholic faith.

Burke had just admitted that the situation is anything but “complex;” we are dealing with “a formal error that goes against what Jesus himself taught and has always been the teaching of the Church.”

If this doesn’t constitute a “truth that one must believe by divine and Catholic faith,” nothing does.

Then again, this is the punchline to the entire conciliar revolution, which is precisely why Burke (man of the Council that he is) can’t quite seem to pull that trigger.

This, however, isn’t the end of the story.

Remember, while Burke has one foot firmly planted in the Second Vatican Council, at least a few of his toes are still wading in tradition. As such, he felt compelled to add:

One heresy could be that of one who sustains that there do not exist intrinsically evil acts; to affirm this would be to say something contrary to the doctrine of the Church and would clearly be a heresy. The affirmation about access to the sacraments of which we were speaking a while ago, on the other hand, refers to a practice that contradicts two doctrines: that of indissolubility of matrimony and that of the real presence of Jesus in the Eucharist. At first glance we can say that certainly it’s an error.

So, it’s “clearly heresy” to teach that which is “contrary to the doctrine of the Church,” but a lesser error to “contradict two doctrines” at once?

In many respects, the reality of the present situation, for those with eyes to see, is as plain as day:

Francis has willfully taken positions that stand in direct opposition to both Sacred Scripture and the dogmatic teaching of the Church; obstinately pushing forward propositions that were plainly condemned by the Council of Trent almost verbatim.

While Cardinal Burke arguably left the door cracked for possibly declaring Francis guilty of heresy, at this point, there is little reason to believe that he (or anyone else in Rome) has the wherewithal to confront him head-on.

I hope I am wrong, but either way, there is nothing stopping me or any other faithful Catholic from pointing directly at Francis and repeating after the Fathers of Trent:

“Let him be anathema!”

Francis and the Humblecam: A match made in…

Francis was right about Burke all along