Home
Blog Post
“Truth or Consequences” is no game

By the time readers reach the end of this post, they may find it difficult to believe that I really do not like “I told you so” articles, but the truth is, I don’t – especially when the predictions-come-true are devastating to souls.

Be that as it may…

In April 2016, just weeks after Amoris Laetitia was published, National Catholic Distorter reported that Hans Küng had sent a letter to Francis requesting his approval “to give room to a free, unprejudiced and open-ended discussion on the problem of infallibility.”

A jubilant Küng said that Francis had responded in the affirmative with a letter of his own, “setting no restrictions on a free discussion on the dogma of infallibility.”

As I pointed out in a post shortly thereafter (Amoris Laetitia: A seminal moment is at hand), the language being used in this case is very telling; the assessment of both Bergoglio and Küng being that “infallibility” and “dogma” are “problems” to be solved.

Thus was it already perfectly clear to readers of this space that Amoris Laetitia (which itself plainly denies several dogmas of the faith) was just the beginning; a document that if allowed to stand would mean that absolutely, positively nothing would be safe under Bergoglio – not the priesthood, not the liturgy, not even Sacred Scripture. Nothing.

Indeed, modernists-in-white who operate from this standpoint have been running the show in Rome from the time of the Council on forward, but none prior to Francis has exhibited a similar willingness to actually proceed scorched-earth-style as if no part of the sacred deposit of Christian doctrine is beyond their reforming reach.

As I wrote at the time, given that nearly three weeks had passed since Amoris Laetitia was published and the most noteworthy reaction from a bishop to date was Burke’s anemic call for an “authentic interpretation,” Bergoglio had every reason to feel emboldened.

Well prior to Amoris Laetitia, it was perfectly plain to akaCatholic readers that the outcome was already settled; it would be something very similar to the Kasper proposal.

With this in mind, I suggested that the real point of intrigue was not so much the events of the then-upcoming Synod, but rather concerned the way in which allegedly faithful churchmen would react once the “God of Surprises” formally pronounced his will.

Now here we are, some two years after Amoris Laetitia, and still not one bishop or cardinal has done anything of note to protect the flock from the Bergoglian wolf, which at this point requires ridding the sheepfold of his menacing presence.

Sure, some of them have taken part in any number of admonishments and corrections – which, very importantly, served to expose the true nature of Francis’ heresy – but these have been rendered practically pointless given that none of them have demonstrated a willingness to take the next crucial step.

At present, even the most outspoken of the bishops is very much like a pathetic parent who warns a wayward child, “I’m going to count to ten, and then…” but “then” never happens; even as the rotten kid continues to wreak havoc.

In the case of Francis, given the utter lack of consequences, there is every reason to believe that the Bergoglian assault against Catholic doctrine and those who uphold it will only multiply in intensity for the foreseeable future.

Look, the neo-conservative bishops are who we thought they were; i.e., no one really expected anything more from these men, but where are the “traditional” shepherds?

More specifically, where is the Society of St. Pius X?

I haven’t heard one relevant whimper from any of them in many months; that is, relevant to the veritable hostage situation in Rome.

Tell me, has any one of these defenders of Catholic tradition proclaimed the obvious and somehow I missed it – namely, the indisputable fact that Jorge Mario Bergoglio has, of his own doing, separated himself from the Mystical Body of Christ after having publicly condemned himself in the face of multiple admonishments, and must therefore be to us as a heathen and publican? (cf Titus 3, Matthew 18)

But what is the point? If a formal declaration isn’t made ‘by the Church,’ yada, yada…

The point of doing so is plain, and it’s the same reason that I feel so compelled:

To proclaim the truth, even when inconvenient and costly, is to proclaim Christ; i.e., it is their solemn duty.

We have long since reached the point where silence can no more be excused as prudence; rather, it is cowardice and ultimately complicity.

And please, don’t kid yourself with any “lesser of two evils” nonsense; as if avoiding schism is a valid argument. Schism already exists!

Furthermore, proclaiming the truth is never evil. Sitting passively while a man posing as pope sets about attacking the Holy Catholic Church and leading souls directly to Hell, on the other hand, is always evil. 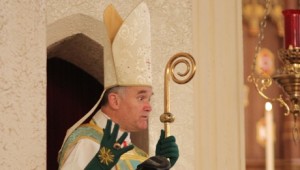 I was present that day in October of 2013 – more than two years before Amoris Laetitia – when Bishop Fellay exclaimed of Francis from the pulpit, and with a palpable degree of righteous anger:

“What we have before us is a genuine modernist!”

Where is that Catholic conviction now that Bergolgio’s modernism has been set forth in official “papal” texts and has even been enshrined in the AAS?

Asked another way, what precisely has happened in the ensuing four-and-a-half years to quell Bishop Fellay’s conviction – even as the “genuine modernist” has only doubled-down on his heresies and has initiated new attacks against the immutable truths of the Faith?

In conclusion, while Amoris Laetitia is disastrous in its own right, the bigger issue (not the biggest – that distinction belongs to Vatican Council II and Fatima) continues to be just what I said even before it was published – and that is the way in which faithful persons, most especially those in the sacred hierarchy, react to it.

Truth or consequences is more than just the name of an old American television game show; it’s a non-negotiable demand of justice, and it applies equally to the liars and to those who fail in their duty to oppose them.

Thus far, the lack of an appropriate response on the part of bishops to Francis’ clear defection from the Faith (if he ever had it) – especially among the “defenders of Catholic tradition” – has invited nothing but more death and destruction for souls.

Francis has proven that he has deaf ears when it comes to the cries of the truly faithful. At this point, it is obvious that the hero-prelates of neo-conservatism do as well.

One wonders, are any among the aforementioned “traditional” bishops any less deaf?

If so, let their voices be heard and soon, lest they too face some truly dreadful consequences.