National Catholic Distorter is reporting that the dissident theologian Hans Küng has publicly confirmed receipt of a letter from Pope Francis responding to his request “to give room to a free, unprejudiced and open-ended discussion on the problem of infallibility.”

According to Küng, the pope gave him (and thus every other like-minded malcontent subversive in Catholic clothing) the green light to have at it.

Given that Francis’ letter “set no restrictions,” according to Küng, “he has thus responded to my request to give room to a free discussion on the dogma of infallibility.”

Notice the language that is used: Küng refers to infallibility as both a “dogma” and a “problem.”

This makes perfect sense as modernists, who operate from the conviction that doctrines can and must change over time, find the very notion of dogma (which by definition is incontrovertible) to be a major problem. 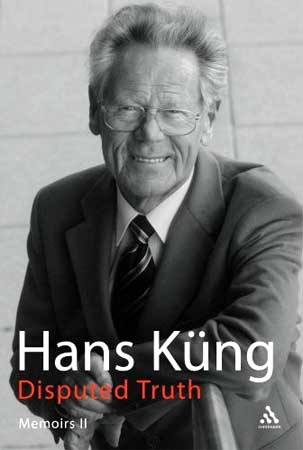 So, what exactly is the “problem” that Küng wishes to discuss, and presumably solve?

I suspect that when many hear “dogma of infallibility,” papal infallibility as defined at the First Vatican Council may immediately come to mind, but make no mistake about it – Küng has a much larger target in mind.

There are three organs of infallibility in the Church; i.e., the modes by which the immutable doctrines of the faith are made known to the faithful:

– Ex cathedra statements given by the pope

With this in mind, let’s be perfectly clear about what Küng desires, and Francis finds no cause to restrict: An open-ended discussion on everything that is currently considered (by Catholics, at any rate) to be unchangeable.

In other words, these men wish to have an “open-ended” debate on what is henceforth considered to be true; one that starts not with the infallible doctrines of the Faith, but rather from scratch.

This should come as no surprise.

It has been clear to readers of this space for some time now that Francis sincerely believes that even matters settled long ago are now up for grabs. Nothing it seems is truly sacred to this man other than man himself, with the possible exception of Mother Earth.

This means that even Divine Revelation is in play!

If anyone had any lingering doubts on this note, Amoris Laetitia, which plainly undermines the indissolubility of marriage as taught by Jesus Christ Himself, should have removed them entirely.

Consider the mere fact that Francis directly contradicted the infallible Council of Trent almost verbatim by stating that “It can no longer simply be said that all those in any irregular situation (e.g., those featuring on-going adultery, fornication, gay sex) are living in a state of mortal sin and are deprived of sanctifying grace” (AL 301).

This alone tells us rather plainly that absolutely, positively nothing is safe under this pope.

Again, this isn’t really news for “traditionalists” (aka Catholics) who have been looking at this disastrous pontificate with eyes opened wide from day one. For us, the only question that has ever really existed concerns just how far the allegedly faithful cardinals and bishops will allow Francis to go unchallenged.

Given the tepid reaction (and in most cases, the total silence) of such men in response to the heresy and blasphemy contained in Amoris Laetitia, the answer is rather obvious; not just to us, but more importantly, to Francis himself.

There can be no doubt that Francis is now more convinced than ever that he can do whatever the Hell he wants to do. The deposit of faith is like clay in his humble little hands. The Holy Catholic Church is his personal playground, and he’s the bully who gets to make up the rules.

And why shouldn’t he be emboldened? Amoris Laetitia was made public nearly three weeks ago, and the most noteworthy reaction from a bishop to date is an anemic call for an “authentic interpretation;” as if Holy Mother Church has failed to provide as much over the course of the centuries!

We’ve grown used to this sort of thing over the years as the Council’s assorted errors and ambiguities have been met, not with the condemnations they so richly deserve, but with calls an “hermeneutic of continuity.”

As such, it is tempting to believe that this is just another day under Francis; he who has been relentlessly attacking the faith (and the truly faithful) from moment one of his dreadful pontificate.

This point of view, however, represents a gross underestimation of the importance of Amoris Laetitia.

Make no mistake, my friends, this document is far more than just the next in a long series of attacks at the hands of a perfidious pope; it is a seminal moment in the ecclesial crisis that hearkens the dawn of a newly darkened day wherein war will be declared against objective truth far more openly and boldly than at any other time in the past.

Like proverbial frogs in a pot of water that is gradually inching its way closer to the boiling point, we have lost our perspective.

Imagine if at some point prior to Benedict’s flight for fear of the wolves, one was to propose that within a few short years the Roman Pontiff will issue a formal exhortation that:

– Opens the way to Holy Communion for unrepentant adulterers and fornicators, and even practitioners of gay sex

If this isn’t incredible enough, imagine if it was further predicted that in the aftermath of this terrible attack on the Faith from the very top of the Church, not one single solitary bishop or cardinal will step forward to rebuke the pope for his heresy and blasphemy!

I dare say that very few among us would have believed it. All of us, however, would likely realize that if such a thing was to ever occur, the madman pope – knowing full well that no one in the episcopate has the stones to oppose him – would then set about destroying the very foundation of the Holy Catholic Church; truth itself as infallibly defined, preserved, and taught throughout the centuries.

[NOTE: “Truth” is, of course, the person of Jesus Christ. As I’ve stated in the past, the very heart of the current ecclesial crisis concerns a Christological heresy wherein the Divinity of Christ is in doubt even to the highest places in Rome. Amoris Laetitia demonstrates as much with remarkable clarity. This was the topic of the presentation that I was honored to give at the Fatima Conference in Boston last weekend. I will go into more detail on this matter in a future post.]

And so here we are. The nightmare has become reality. Francis has issued a decree that undermines the very words of Christ. He has gone where few would ever have dreamed; not even Hans Küng, who said:

“I could not have foreseen quite how much new freedom Francis would open up in his post-synodal exhortation, Amoris Laetitia.“

With the publication of Amoris Laetitia, Francis not only committed the grave offenses contained therein; he has declared a new freedom to challenge the very existence of Truth itself; he has thus declared war on Christ the King.

As of this moment, the Shepherds have proven themselves to be little more than hirelings; mitred castrati who have been pleased to lay down their croziers in the face of the approaching wolf. The sheep are being scattered and there is none to protect them.

Let us pray that this changes, and soon.

Church, State and Coronavirus: Where stands the SSPX?

Is the fullness of Antichrist’s time come?