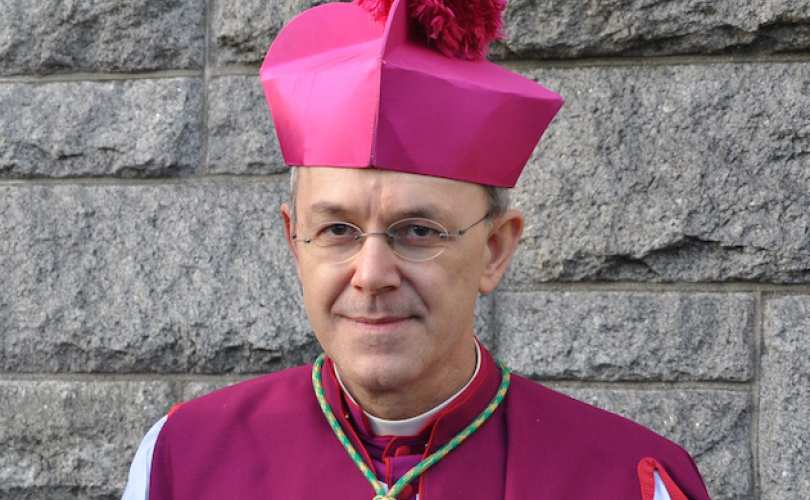 In light of Bishop Athanasius Schneider’s recent essay, Amoris laetitia: a need for clarification in order to avoid a general confusion (translation from the Italian provided by Rorate Caeli), I have sent the following letter to His Excellency (with whom I have been honored to recently engage privately on another matter). I believe that the letter (and my decision to publish it here in full) speaks for itself. Should I receive a response along with His Excellency’s permission to publish it, I will do so.

At the risk of disrupting our recent cordial correspondence and perhaps guaranteeing that it continues no further (which I would very much regret), I feel compelled to offer the following response to your essay on Amoris Laetitia.

One of the points that I wish to raise concerns the necessity of offering straightforward public critiques of those things that endanger the Faith in a pubic way (like the exhortation in question). As such, I want you to know that I intend to publish this letter on the blog at akaCatholic.com for the edification of our readers.

I must admit to being rather disappointed by your essay. While it makes a number of good points, it fails to adequately oppose, with equal force, the grave offenses against truth contained in Amoris Laetitia.

Throughout the essay, you speak of ambiguities, interpretations and opinions regarding the text of the exhortation, as if therein lies the central problem. In point of fact, however, AL contains grave errors, heresy, and blasphemy.

For the sake of clarity (though I have little doubt that you are most fully aware already) I’ll offer just two examples:

“It can no longer simply be said that all those in any ‘irregular’ situation are living in a state of mortal sin and are deprived of sanctifying grace.” (AL 301)

Given that “irregular” here refers to the very activities infallibly taught by the Council of Trent (Session VI, Chapter XV) as those that are properly called mortal sin, the same leading to the loss of sanctifying grace, AL 301 can be said to promote heresy.

With respect to those who persist in such sins knowingly, Amoris Laetitia states that such persons:

“… can also recognize with sincerity and honesty what for now is the most generous response which can be given to God, and come to see with a certain moral security that it is what God himself is asking amid the concrete complexity of one’s limits…” (AL 303)

Since the Catholic faith teaches with dogmatic certainty that God in His Holiness never asks us to sin, this statement is not only heretical, but sheer, unadulterated blasphemy as well. Even so, your essay falls well short of expressing the kind of outrage that is warranted by such offenses.

“If we analyze certain statements of AL with intellectual honesty within their proper context, we find ourselves faced with difficulties when trying to interpret them in accordance with the traditional doctrine of the Church. This is due to the absence of the concrete and explicit affirmation of the doctrine and constant practice of the Church, founded on the Word of God.”

I must respectfully disagree. The difficulties you cite are more properly due to positive statements made in the exhortation that stand in stark contradiction to the doctrine of the Faith as infallibly taught.

The absence that truly matters with respect to Amoris Laetitia is the absence of the due goods of clarity of expression, freedom from error, and faithfulness to the immutable truth that every papal instrument should have by its very nature.

As such, is it not the case that Amoris Laetitia is therefore objectively evil?

“A verbal quote from Familiaris Consortio n. 84 and of some of the most significant affirmations in Veritatis splendor would render AL unassailable by heterodox interpretations.”

Would adding authentic doctrine serve to negate the erroneous statements, or would it only add to whatever confusion may already exist?

While I am certain that you are attempting to be fair minded, I find it very troubling that you saw fit to temper your criticism of the document by saying:

“Amoris Laetitia, which contains a plethora of spiritual and pastoral riches with regard to life within marriage and the Christian family in our times…”

“Fortunately, there can be no doubt that AL contains theological affirmations, as well as spiritual and pastoral guidelines of great value.”

I fear that these are gravely dangerous statements in that they may lead certain of the faithful to believe that AL can be safely and fruitfully navigated, in spite of its errors, in order to harvest certain “riches.”

Does not the Biblical admonition regarding “a little leaven” apply?

In any case, the full truth concerning Christian marriage is taught without compromise in other readily available magisterial texts that are not compromised by error. As such, does Amoris Laetitia provide anything whatsoever of value to those who wish to know and remain in the truth?

You provided a lengthy list of “logical conclusions” to which certain possible “interpretations” of AL might lead; each one of them amounting to the tacit denial of immutable truth.

Again, with all due respect, is it not more intellectually honest to say that many of these possible “interpretations” of AL, and the regrettable consequences that they invite, are really nothing more than the exhortation’s practical application and the fruits thereof?

“To declare that the deliberate, free and habitual practice of sexual acts in an invalid marital union could, in individual cases, no longer constitute a grave sin is not the truth, but a serious lie, and will therefore never bring genuine joy in love.”

Would one be intellectually dishonest to say that Pope Francis plainly told just such a “lie” in AL 301? (I prefer to call it by its proper name; heresy.)

“Consequently, to grant permission to such persons to receive Holy Communion would be a bluffing, a hypocrisy and a lie. The Word of God in Scripture is still valid: ‘He who says ‘I know him’, but does not keep his commandments is a liar, and the truth is not in him’ (1 John 2: 4).”

In spite of so much talk about the “confusion” AL invites, Pope Francis has made his desires plainly known; namely, that certain of those in so-called “irregular situations” be invited to the sacraments. Is it not intellectually honest to say, therefore, that Amoris Laetitia itself is tantamount to a bluffing, a hypocrisy and a lie?

“In the event of a person committing objectively sinful moral acts in full awareness of the sinfulness of such acts, freely and deliberately, and with the intention of repeating such acts in the future, it is impossible to apply the principle of imputability for a fault because of mitigating circumstances. The application of the principle of imputability to such divorced and remarried couples would constitute hypocrisy and a Gnostic sophism.”

Pope Francis did in fact propose the application of imputability in such cases (cf AL 302). Is it not intellectually honest to say that he is guilty, therefore, of fomenting hypocrisy and Gnostic sophism?

“If the Church were to admit such people to Holy Communion even in a single case, it would contradict its own doctrine, give public testimony against the indissolubility of marriage and thus contribute to the spreading of the ‘plague of divorce'” (II Vatican Council, Gaudium et spes, 47).

Intellectual honesty would seem to demand that we acknowledge that Pope Francis, in any number of ways, does in fact undermine the doctrine of indissolubility and thus contributes to the spreading of the “plague of divorce.” Can any good come from failing to warn the innocent of this danger?

“In order to avoid such an intolerable and scandalous contradiction, the Church, in its infallible interpretation of the divine truth of moral law and of the indissolubility of marriage…”

Is it not true that the Church does not so much interpret the divine truth of moral law and the indissolubility of marriage; rather, she teaches such things plainly and infallibly in the name of the Lord by His own authority?

Furthermore, is it not the case that she avoids scandalous contradictions by plainly condemning error, especially when it come from those who, by virtue of their ecclesial rank, give the appearance of credibility?

“When dealing with the observance of the express commands of God and the indissolubility of marriage, we cannot speak of opposing theological interpretations. If God says, “thou shalt not commit adultery”, no human authority could say “in some exceptional cases or for a good purpose you can commit adultery”.

Does not intellectual honesty force us to admit that Pope Francis has effectively, even if not verbatim, made just such a public statement in Amoris Laetitia?

If this be the case, is it not true that he must be held accountable in an equally public way for the good of souls?

“If the divorced and remarried say that their voluntary and deliberate acts against the sixth commandment of God are not always sinful or, at least, do not constitute major sins, they are deceiving themselves and the truth will not be in them…”

Pope Francis has plainly said as much (ibid.). Is it not intellectually honest to admit that he is, therefore, guilty of deceiving the faithful and the truth is not in him, even though this admission causes us great pain?

You made multiple calls for an authentic interpretation of AL:

“All members of the Church, and especially the bishops, as the fraternal collaborators of the Supreme Pontiff in effective collegiality, have a duty to report this [potential for danger] and respectfully request an authentic interpretation…”

“There is an urgent necessity for the Holy See to confirm and re-proclaim the citeds formula of Familiaris Consortio 84, perhaps in the form of an authentic interpretation of AL…”

“An authentic interpretation of AL by the Apostolic See would bring to the entire Church (“claritatis laetitia”) the joy in clarity.”

And yet, in spite of this, you state:

“However, realistically speaking, it is insufficient to say that AL should be interpreted according to the traditional doctrine and practice of the Church.”

If I may say, I suspect that this glaring contradiction concerning the usefulness of mere interpretations arises not out of any genuine confusion on your part about what really needs to be done, but out of a reluctance to do it.

You even cited the example of an appropriate, saintly, response on the part of a bishop:

“St. Hilary of Poitiers was the only bishop who dared to rebuke Pope Liberius severely for these ambiguous acts.”

It seems rather clear to me that Amoris Laetitia is best understood as a document that plainly suffers from grave error, a lack of due good, and as such it is therefore properly called evil. If Pope Liberius merited rebuke for endangering souls by virtue of certain “ambiguous acts,” how much more does Pope Francis merit severe rebuke, delivered in a manner equally as public as his offenses against truth?

In conclusion, Excellency, many of the faithful have been awaiting with great anticipation your response to this terrible scourge on the Catholic Church at the hands of Pope Francis.

In light of the points that I’ve raised here with respect to your essay, we are now left to wonder if any in the episcopate of today have the courage to follow the example of St. Hilary of Poitiers. At this historically tragic moment in the life of the Church that we love so much, I implore you, Excellency, for the salvation of souls, be that bishop!

Yours truly in Christ with Immaculate Mary,