Home
Blog Post
The Catholic attitude toward the Sacred Councils 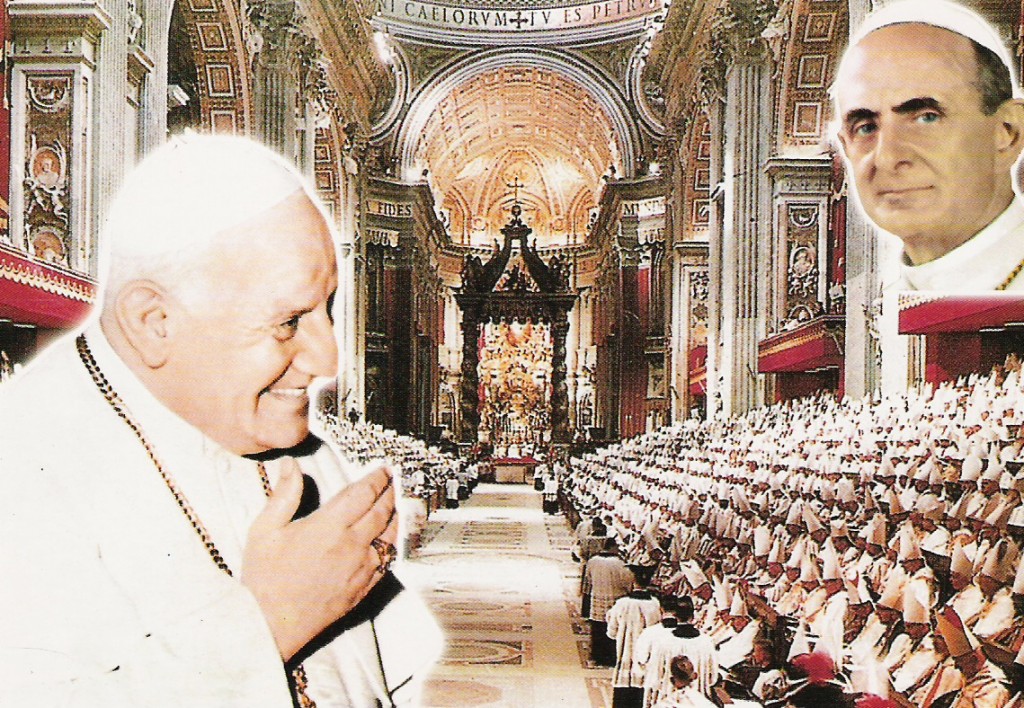 I recently received a copy of Opera Omnia of St. Robert Bellarmine vol. 2: On the Church, from Mediatrix Press, translated from the Latin by Ryan Grant. It includes On Councils, On the Church Militant, and On the Marks of the Church. (See image below.)

Shortly after cracking the cover, the Preface to On Councils stopped me in my tracks.

In this book I am going to defend, with all my strength, the authority of the Sacred Councils, which has always been great in the Church, in opposition to the manifold lies and calumnies of the heretics.

The “Sacred Councils” to which the great Doctor of the Church refers are, of course, the ecumenical councils (aka general councils), like the Council of Trent, which concluded just three years after he had joined the Society of Jesus.

About such councils, noted theologian Dr. Ludwig Ott wrote in his masterwork:

It has been the constant teaching of the Church from the earliest times that the resolutions of the General Councils are infallible. (Ludwig Ott, Fundamentals of Catholic Dogma, 2nd Ed, 1957, Roman Catholic Books, pg. 299)

Notice that Ott is insisting upon the infallibility of two distinct propositions: Not only is he plainly stating that the teachings (on faith and morals, as he makes clear elsewhere, cited below) that come forth from an ecumenical council are infallible, he is letting it be known that this proposition is itself  infallible inasmuch as “it has been the constant teaching of the Church from the earliest times.”

Bear in mind the definition of infallible as provided by the 1917 Catholic Encyclopedia:

We may, therefore, understand Ott to state: The Catholic Church has consistently held that there exists no possibility of error in the resolutions of the General Councils.

With this in mind, there should be no doubt in the mind of the reader about the greatness of the authority vested in the Sacred Councils of which Bellarmine wrote, as their teachings “on questions of Faith and morals are infallible and consequently irrevocable.” (Ott, ibid., pg. 10)

Ott went on to cite two other Doctors of the Church on the greatness of these councils:

St. Athanasius says of the Decree on faith of the Nicene Council: “The words of the Lord which were spoken by the General Council of Nicaca, remain in eternity” (Ep. ad Afros 2). St. Gregory the Great recognises and honours the first four General Councils as much as the Four Gospels; he makes the fifth equal to them (Ep. I 25).

The words of the Lord… On par with the Gospels… Could the authority of the ecumenical councils be any greater?

At this, let us return to the Preface of St. Robert Bellarmine wherein he lets it be known that ecumenical councils, precisely due to their greatness, are especially despised by Satan, who wishes nothing more than to attack and to weaken their authority in the minds of the naïve and the ignorant:

Still, before I approach this matter, I have thought a few words must be said on the supreme and incredible subtlety that the supporters of Satan have applied to lessen this authority in our times. For, because the authority of Councils is sacrosanct in the Catholic Church, as is just, it always served to diminish the greatest disturbances of affairs, like a sort of salutary lightening, to shine the light in order to dissipate the darkness of error. 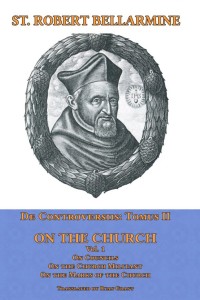 CLICK HERE to purchase a copy of this valuable edition

No less have the supporters of Satan in our times – even if only out of naïveté or ignorance – labored to lessen the authority of ecumenical councils!

I am referring, of course, to Vatican Council II, the disastrous event that served not to diminish disturbances or to dissipate the darkness of error, but to propagate them like never before.

And yet, the overwhelming majority of so-called progressives, conservatives, and even traditionalists casually refer to Vatican II as the twenty-first ecumenical council of the Holy Roman Catholic Church.

Ott outlines the requirements that must be met in order for a council to be considered a genuine ecumenical council of the Church:

In order that a Council should be a general one it is necessary: a) That all the ruling Bishops in the world be invited; b) That in point of fact so many Bishops from the various countries come, that they may be regarded as being representative of the whole Episcopate;  c) That the Pope summon the Council, or at least invest the assembly with his authority and preside personally or by his representative at the meeting, and ratify the resolutions. From the Papal ratifications, which can be explicit or implicit, the resolutions derive general legal binding power. CIC 227.

Ask any of the aforementioned progressive, conservative or traditionalist Catholics how Vatican II stacks up in light of these requirements, and they will tell you:

a) Indeed, all the ruling Bishops in the world were invited.

b) Indeed, so many Bishops attended as to be representative of the whole Episcopate.

c) Indeed, the Council was initially summoned by John XXIII, and then continued by order of Paul VI, and was duly presided over by both men.

In spite of their confidence on these points, practically every so-called traditionalist feels eminently free to disparage the resolutions of Vatican II as if they have exactly no authority whatsoever, great or otherwise. In fact, if devotion to the Latin Mass is the first defining characteristic of the so-called traditionalist, a willingness (nay, the obligation) to publicly condemn the “errors of Vatican II,” many even going so far as to speak of conciliar heresies, is a close second.

One wonders how St. Robert Bellarmine would respond to such an attitude.

How dare you supporters of Satan call yourselves Catholic while laboring to lessen the authority of an ecumenical council, and in a manner so lacking in subtlety!  Know you not that the authority of councils is sacrosanct in the Catholic Church?

While we cannot know for certain exactly what Bellarmine would say if alive today, it is beyond any debate whatsoever that he would acknowledge that the traditionalist posture toward Vatican II is absolutely incompatible with an authentic Catholic attitude toward true ecumenical councils, convened by, and ratified by, true popes.

So, in precisely what way, one fairly inquires of such persons, does Vatican II fall so short that you consider yourself free to publicly reject its teachings?

There are only so many variables, as explained by Ott:

To this list, I will add another: Either Vatican II came from Holy Mother Church or not.

If each of these benchmarks were in fact met, then the only true Catholic attitude is to receive the resolutions of the Second Vatican Council as if they cannot possibly be in error. This would mean fully embracing the notion that Christ Our Lord uses the communities of the heretics as “means of salvation,” the proposition that man by virtue of his own dignity has the right to religious freedom, and the novel idea that the Church of Christ merely subsists in the Catholic Church.

In other words, if Vatican II is a valid ecumenical council of the Church – convened, presided over, and ratified by true popes – as nearly all traditionalists insist, then its resolutions must be held as infallible, not because I say so, but because, as Ott explains, this is the constant teaching of the Church from the earliest times.

One may very well object: Yes, but the popes have repeatedly insisted that the Council did not teach infallibly!

OK, fair enough. Ott states that even the decisions of the Roman Congregations, which are not infallible, “are to be accepted with an inner assent which is based on the high supernatural authority of the Holy See.” He goes on to say that “reverent silence does not generally suffice.” (Fundamentals, pg. 10)

Do any self-identified traditionalists – whatever they may wish to call Vatican II – genuinely accept and assent to the Council’s version of religious liberty, ecumenism, relations with the Jews, etc., with confidence in the high supernatural authority of the Holy See?

Certainly not, point being that that there is a fundamental disconnect between what the overwhelming majority of so-called traditionalists hold to be true, or at least what they publicly claim to believe, and their attitude toward the Novus Ordo, the Council, and the popes responsible for creating and promoting them.

Perhaps this inconsistency is so apparent to me because I’ve been there.

Not so many years ago, as longtime readers know, I authored and published a series of Vatican II study guides that received an imprimatur. Over the years, they were used by individuals and groups in English speaking countries around the world. I was invited to give conferences in parishes and dioceses where I would extoll the virtues of the Council and the Novus Ordo. My work enjoyed the public support and encouragement of well-known theologians, priests, bishops and even cardinals.

I honestly believed that I was defending the truth back then, not because I was so confident in my own opinion, but because I had great confidence in the Church, guided by the gift of the papacy, as I understood them. I believed with all of my heart that nothing that is evil,  offensive to God, or dangerous to souls, could ever be dispensed to the faithful from such exalted sources, and I believed that this confidence is rightly extended to the Council and to the liturgy it inspired.

Looking back, misguided though I was, at least I can honestly say that my attitude toward these things and persons at that time – my public words and my deeds – were entirely consistent with what I held to be true.

As I came to realize just how wrong certain of my beliefs were – thanks be to Our Lady and her Son for opening my eyes – there was no question that my public posture had to be brought in line with the Catholic truths I had newly encountered, no matter the cost. All glory and honor to God, it never even occurred to me to worry about losing any of the temporal comforts that were attached to what I had been doing, but I can understand how that temptation may loom large for others.

In conclusion: If any of what has been written here strikes a personal chord, (i.e., if some of these shoes fit, as the saying goes), consider reflecting, privately and honestly, on the following this Lent:

What are your beliefs about Holy Mother Church, the papacy, the Council and the Novus Ordo? Is your understanding of, and attitude toward, these things truly Catholic? Are your public words and deeds consistent with, or disconnected from, what you know to be true? Are you really willing to seek the truth and follow it wherever it may lead, or do you place a greater value on the comforts provided by the status quo?

With the help of God’s grace, may all of us continually refine our attitude, reconciling it with the truths of the faith as we come to know them better, a lifelong effort to be sure.

The people that walk in darkness have seen a great light