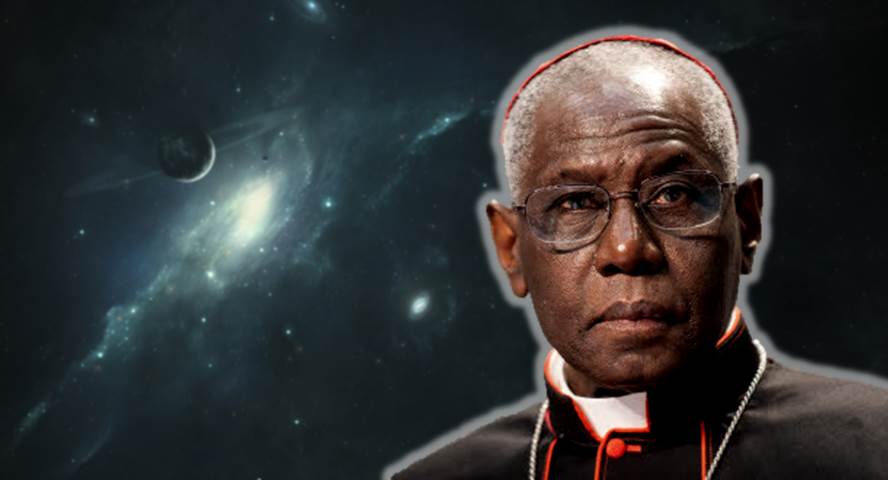 On 29 March, Cardinal Robert Sarah, Prefect of the Congregation for Divine Worship and the Discipline of the Sacraments, delivered an address at a conference commemorating the 10th anniversary of Summorum Pontificum.

Neo-Catholic and faux “traditionalist” media outlets alike (if you’ll pardon the redundancy) are sure to use the occasion to once again sing the Cardinal’s praises; as if he is a beacon of hope piercing the modernist fog that presently engulfs Rome.

Most of us already know who the neo-Catholic players are, but the faux traditionalists can be a little more difficult to spot.

Their treatment of Cardinal Sarah is always revealing in that it makes plain the degree to which they fail to grasp the diabolical nature of both the Second Vatican Council and the Novus Ordo Missae; apart from which no claim to “traditionalism” can be taken seriously.

In short, you can rest assured that wherever one finds Cardinal Sarah being praised for his orthodoxy, or congratulated for standing firmly against liturgical and doctrinal innovations; there, tradition does not truly live.

(Thanks to a kind reader, S.B., for forwarding quotes to this extent from just such a “faux traditional” outlet that I prefer not to name.)

Returning now to Cardinal Sarah’s most recent address, he began his talk:

As you know, what was called “the liturgical movement” in the early twentieth century was the intention of Pope Saint Pius X, expressed in another Motu proprio entitled Tra le sollicitudini (1903), to restore the liturgy so as to make its treasures more accessible, so that it might also become again the source of authentically Christian life. Hence the definition of the liturgy as “summit and source of the life and mission of the Church” found in the Constitution on the Sacred Liturgy Sacrosanctum Concilium of Vatican Council II (see n. 10).

How dare Cardinal Sarah suggest for even a moment that the unprecedented liturgical devastation following Vatican Council II can in any way be traced back to the magisterium of Pope St. Pius X!

This alone tells us all that we need to know about Sarah’s relationship with tradition.

I would encourage anyone who has yet to do so to read the aforementioned Motu Proprio in its entirety. Those who do will find that neither Sacrosanctum Concilium nor the Novus Ordo Missae find any quarter whatsoever in the words of the saintly pope.

And yet, Cardinal Sarah calls the Constitution on the Sacred Liturgy of Vatican II “one of the finest fruits” of the “liturgical movement initiated by Pope Saint Pius X.”

I won’t rehash covered ground, but would invite those interested in reading (or re-reading as the case may be) an examination of the Constitution on the Sacred Liturgy and its contribution to the present liturgical disaster that was originally posted HERE.

The Prefect went on to insist upon the novel idea of an “ordinary” and an “extraordinary” form of the one Roman Rite, a novelty that was invented by Benedict the Abdicator:

Thus, presently, in the Roman or Latin rite, two missals are in force: that of Blessed Pope Paul VI, the third edition of which is dated 2002, and that of Saint Pius V, the last edition of which, promulgated by Saint John XXIII, goes back to 1962 … the two Forms of the usage of the Roman rite can be mutually enriching…

A theme is developing… (HINT: Men of the Council: Good. Men of tradition: BAD.)

At one point, Cardinal Sarah states:

I vehemently refuse therefore to waste our time pitting one liturgy against another, or the Missal of Saint Pius V against that of Blessed Paul VI.

Pitting one liturgy against another, you know… like those bad men Cardinal Ottaviani, Cardinal Bacci, and Archbishop Lefebvre.

The idea that Cardinal Sarah stands firm against doctrinal and liturgical innovation is patently absurd.

The Prefect goes on:

Yes, so much “continuity” that a 1950’s era Catholic, if dropped into a “reverent” Novus Ordo, would be absolutely positive that he was witnessing a protestant service.

It is also very important to emphasize the continuity between the two missals by appropriate liturgical catechesis… this mystical and spiritual renewal that is therefore missionary in character, which was intended by the Second Vatican Council, to which Pope Francis is vigorously calling us.

This is the same “Pope Francis” who on multiple occasions has condemned the work of seeking coverts (so much for missionary character) and who also vigorously called Cardinal Sarah to the carpet; ordering him to knock it off with all that ad orientem talk.

Clearly, Cardinal Sarah got the message loud and clear, and it is plain for all to see precisely where his priorities lie; namely, in finding favor with the Modernist in Chief.

There is much in Cardinal Sarah’s address that rightly applies to the sacred liturgy generally speaking; i.e., to the Traditional Roman Rite, but the soundbites don’t tell the whole story.

The premise of his talk is that the Novus Ordo is a liturgical treasure, the luster of which is sullied only to the extent that one lacks knowledge of just how magnificent it truly is.

While ignorance of things liturgical can hamper one’s ability to enter deeply into the sacred mysteries, what Cardinal Sarah is promoting is a form of liturgical Gnosticism wherein the principle lex orandi, lex credendi is turned on its head.

This, he makes explicit when he paraphrases Cardinal Ratzinger:

The crisis of the weakening of the faith comes in large measure from the way in which we treat the liturgy, according to the old adage: lex orandi, lex credendi (the law of faith is the law of prayer).

This is exactly backwards.

In reality, the weakening of faith that characterizes the post-conciliar period came in large measure from the way in which the new liturgy treated the people by allowing, if not explicitly cultivating, a protestant mindset and theology that is utterly foreign to the Mass.

[For specific examples, consider the so-called Mass of Christian Burial according to the Roman Missal.]

Cardinal Sarah is unwilling to address this particular elephant in the sacristy. He says:

The Eucharist is not a sort of “dinner among friends”, a convivial meal of the community, but rather a sacred Mystery, the great Mystery of our faith, the celebration of the Redemption accomplished by Our Lord Jesus Christ, the commemoration of the death of Jesus on the cross to free us from our sins.

This is all well and good, but hold your applause:

Nowhere does Cardinal Sarah acknowledge the fact that the Novus Ordo rite itself is flawed; so much so that those who approach the New Mass as if it is a “convivial meal” will find plenty in the rite to confirm their protestant ideas.

What’s more, it is my experience that many, even most, daily Novus Ordo attendees have no idea what the Mass truly is. It’s not because they are stupid; it’s because the rite is failing them.

If the Sarah approach is followed, at best those who bring a Catholic understanding of Holy Mass to the Novus Ordo will be left to force their knowledge upon the proceedings in spite of its mixed messages and deviations.

And let me be clear: I’m not talking about liturgical abuses, but rather the rite celebrated “by the book.”

You may read the rest of Cardinal Sarah’s address for yourself if you so care.

Whatever you do though, don’t be tricked into supporting those in Catholic media who are pleased to place Cardinal Sarah on a pedestal as neither one is a true friend of tradition.

‘Fatima’ the Movie: Was it worth the wait?