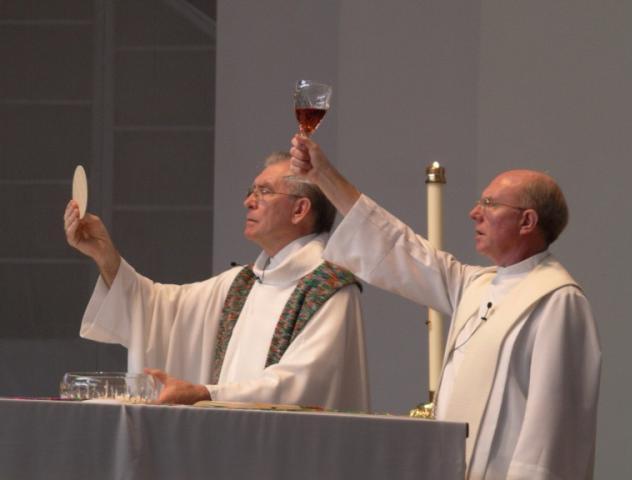 There’s an interesting piece running at the New Liturgical Movement blog entitled, The Danger of Equating Vatican II and the Liturgical Reform, by Dr. Peter Kwasniewski of Wyoming Catholic College.

The title more or less suggests the thesis, and in a literal sense, it has some merit.

After all, the Constitution on the Sacred Liturgy, Sacrosanctum Concilium, did not call for much of the nonsense that has come to define the Novus Ordo Missae; e.g., versus populum worship, the near abolition of Latin, the dreadful music, etc.

That said, the article falls short in that it fails to address the unsettling reality that Sacrosanctum Concilium opened the door for the “bringing down to earth” of the Roman Rite to follow, even as, arguably, the majority of Council Fathers never imagined that the end result would be the protestantized product that emerged.

Yes, you read that correctly. The Council Fathers, some naively, others deliberately, made ecumenism one of, if not the, driving force behind the liturgical reforms.

So when we read commentary from a Protestant professor saying, “…nothing in the renewed Catholic Mass need really trouble the Evangelical Protestant,” let’s be very clear, it’s not because the reformers simply abandoned Sacrosanctum Concilium; it’s because they were successful in accomplishing its stated desire.  (cf M.G. Siegvalt, La Croix,  22 Nov 1969)

Likewise, when we recognize the harm done by liturgists who seem to believe that the Council serves as their personal mandate to ensure that as many people as possible are “doing something” in the liturgy, all in the name of “active participation,” let’s not pretend that they simply took it upon themselves to downplay the primary role interior participation.

“To promote active participation, the people should be encouraged to take part by means of acclamations, responses, psalmody, antiphons, and songs, as well as by actions, gestures, and bodily attitudes. And at the proper times all should observe a reverent silence.”  (SC 30)

Furthermore, when we lament the degree to which our liturgies have been stripped of sacred mystery, as if every last word and gesture must be plainly understood by all, in spite of the reality of Holy Mass as nothing less than a mystical encounter with the ineffable Lord, let’s be sure to take into account the role that the Constitution played in promoting this process of dumbing-down the Holy Sacrifice:

“In this restoration, both texts and rites should be drawn up so that they express more clearly the holy things which they signify; the Christian people, so far as possible, should be enabled to understand them with ease and to take part in them fully, actively, and as befits a community.” (SC 21)

Unfortunately, flaws such as these, and far worse, are sprinkled throughout the conciliar text, posing as solemn teaching when indeed they are nothing of the sort.

Even though Dr. Kwasniewski plainly acknowledges that there are “problems, difficulties, and ambiguities in the conciliar documents,” still he holds firm to the conviction, “The teaching of the sixteen official documents of Vatican II supports rather than dismantles traditional Catholic theology and piety.”

Every pope from Paul VI onward has said essentially the same thing, and so I can understand why faithful Catholics, many of whom identify as “conservative,” might be predisposed to believing it.

I used to believe it too, but then, by the grace of God, I decided to view the conciliar text in the light of all that preceded it and not just the past 40 or so years, at which point, I was forced to ponder some important questions:

– Is it really true, as the Council suggests, that Christ uses not just the Catholic Church as a means of salvation, but also heretical communities too numerous to number? (Unitatis Redintegratio)

– Are the children of the Church, as the Council suggests, really one in Christ with those who reject Him, deny His sacred divinity, and scoff at His glorious resurrection? (Nostra Aetate)

– Does mankind really have, as the Council suggests, a God-given right to worship idols? (Dignitatis Humanae)

Clearly, the Catholic response to each of these questions is a resounding no!  Even so, Dr. Kwasniewski remains entirely committed to the conservative party line.

“But it is still more certain that the final documents …  are free from error in faith and morals, being the formal acts of an ecumenical council and solemnly promulgated by the Pope,” he writes.

This raises a critical question: At what point do the “problems, difficulties, and ambiguities in the conciliar documents” rise to the level of error, or at the very least, to the level of that which must be plainly rejected given the great harm they have, and continue, to invite?

The article concludes with a warning, “We must never, as it were, abandon the Council to the modernists; this would only play into the devil’s hands.”

I agree entirely, but sadly, Dr. Kwasniewski doesn’t realize that in clinging to the idea that the Council as a whole “supports rather than dismantles traditional Catholic theology and piety,” he is doing just that.