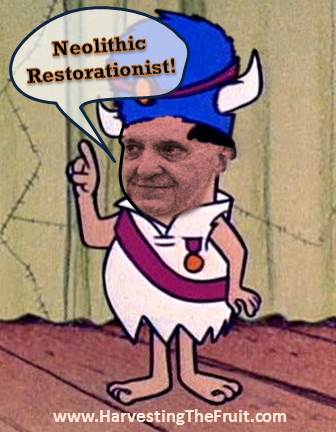 It occurs to me based upon recent emails and telephone calls that the crisis besetting the Church in our day, while not terribly complicated, is perplexing to many otherwise bright Catholics.

Perhaps the following illustration, devoid of ecclesial-speak; set forth in terms more readily understood by the average person, may prove useful to such people in your own life. If so, feel free to pass it along.

Fred Flintstone, as everyone knows, belongs to the Loyal Order of Water Buffalo, Bedrock Lodge.

What many do not know, however, is that the Water Buffaloes have developed a very specific set of principles that have been passed along from generation to generation, in all integrity, from the beginning of the Stone Age onward.

All Water Buffaloes must assent to these principles as they are set forth in the Great Depositerium and consistently taught and expounded upon by the Grand Poobahs throughout the age.

Fifty years ago, many centuries after the Order’s founding, the reigning Grand Poobah, Johnny Rockalli, called a surprise General Herd so the top Water Buffaloes could gather from Lodges around the known world to update the language of the Great Depositerium.

Poobah Rockalli was firm: “Fellow Water Buffaloes of the General Herd, you have no authority whatsoever to change the principles in the Great Depositerium, you are simply to re-articulate them so that they will hit the boulderheads like a ton of bricks; i.e., even they will be able to understand them.”

After years of chiseling away, the Herd unveiled the Bronze Age Depositerium (BAD for short), but it soon became clear that there were serious problems.

The Herd often used new hieroglyphics that were confusing. Many of the Water Buffaloes, therefore, no longer knew the principles. Lodges began to close, some members didn’t even know enough to give a respectable Water Buffalo handshake!

Some of the Water Buffaloes loved the Loyal Order so much, that their Lodges decided to stick with the venerable Great Depositerium as it existed for centuries before the BAD confusion set in.

Well, not so fast…

You see, most of the Lodges put allegiance to the BAD work carried out by the General Herd, confusion and all, before fidelity to the principles that the Loyal Order still claims to believe; just as they are set forth in the Great Depositerium.

The Water Buffaloes who cling to the BAD and defend it as though it is good, or at least, good enough, save for a few parts that even they don’t really like, are not only terribly confused for the most part, their numbers are dwindling; their Lodges crumbling right before their very eyes.

Many of them, including the new Grand Poobah, Frank Humblestone, are angry with the Great Depositerium Lodges, calling them names, like “Neolithic Restorationist.”

Some poor confused members of the BAD Lodges even claim that the others aren’t even Water Buffaloes at all.

The Water Buffaloes of the BAD Lodges mean well most of the time, but they sure do sound awfully silly.