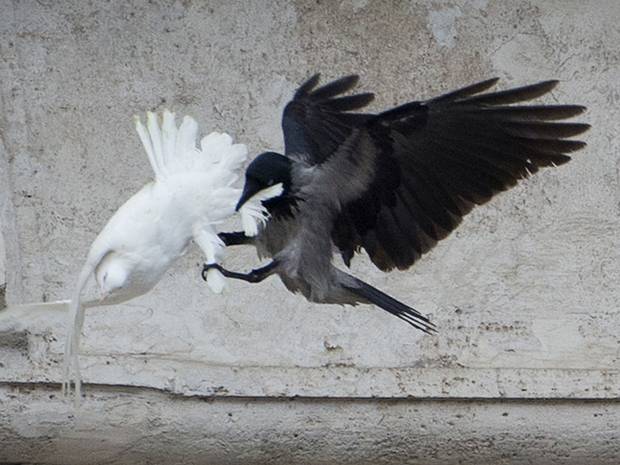 Just as I might have suspected, there may be more to the “peace dove incident” than birds being birds.

(Vatican City) Asked by reporters about the “peace doves” that were released by children standing alongside Pope Francis on Sunday, the Holy See Press Office would not comment on rumors that certain “restorationist groups” may have been involved in their demise. It was, however, confirmed that Ecclesia Dei Commission is looking into the incident.

The doves were immediately attacked, one by a sea gull, the other by a crow, as onlookers gasped in horror, many shielding the eyes of their young children from the carnage.

“No public statements will be issued until the formal investigation is complete,” reporters were told.

Speaking on condition of anonymity, a top ranking Curial official familiar with the investigation, though unwilling to confirm that the SSPX is the prime suspect, referred to the group as “Pelagians of interest.”

Pressed further, he conceded, “Their District Headquarters in Rome is located just two kilometers from St. Peter’s. The typical crow can make that trip in less than two hours. That’s all I’m saying.”