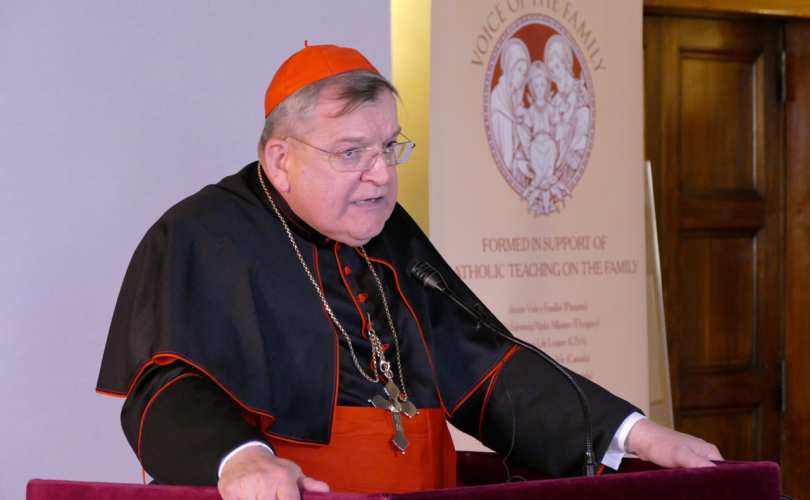 At the Rome Life Forum last weekend, Cardinal Raymond Burke urged Catholics to submit to the reign of Christ the King.

At present, unfortunately, the full text of the address appears unavailable, however, excerpts have been provided in several articles posted at LifeSite News.

According to those reports, Cardinal Burke stated:

The Kingship of Christ is, by nature, universal, that is, it extends to all men, to the whole world. It is not a kingship over only the faithful or over only the things of the Church, but over all men and all of their affairs.

In this, Cardinal Burke is simply stating, at least in part, the traditional (and, incidentally, immutable) doctrine of the Church concerning the Social Kingship of Christ as articulated very clearly in the Encyclical of Pope Pius XI, Quas Primas, and elsewhere.

The kingship is exercised from the Heart of Christ in human hearts. It does not pretend to govern directly the world but to govern it through man.

OK… we’re still on Catholic ground, although one senses a tremor…

Christians who do not pretend to govern the civil state by means of the Church at the same time are called to give an heroic public witness to the truth of the moral law, of the law of God. Thus, Christ’s Kingship is exercised by hearts one with His Royal Heart.

At this, the ground is not only rumbling, it is beginning to crumble.

Cardinal Burke seems to be suggesting that it is ill-advised for those who exercise civil authority to do so “by means of the Church;” as if for them “heroic public witness” is somehow limited to their personal life and does not extend to how they govern.

In reality, those who govern are obligated to do so by means of the Church!

Simple, as Cardinal Burke stated previously, the Kingship of Christ extends over all men and all of their affairs, and it is through the Holy Catholic Church alone that He speaks and thus guides the affairs of men – yes, even the affairs of State.

All men are bound absolutely to worship God in that way which He has shown to be His will. It is, therefore, the bounden duty of rulers of State to favor the one true religion, to protect it, to shield it under the credit and sanction of the laws, and neither to organize nor enact any measure that may compromise its safety. (cf Immortale Dei – 6)

Needless to say, it is impossible for those who govern to uphold this sacred duty apart from availing themselves of, and heeding, that which only the Holy Catholic Church can provide; i.e., by means of the Church.

Given that Cardinal Burke is most certainly a man-of-the-council, it would seem too much for us to expect him to proclaim the Church’s doctrine on the Social Kingship of Christ in its fullness, as this would require him to denounce as irreconcilable with immutable Catholic tradition the text of Dignitatis Humanae – the Declaration on Religious Liberty of Vatican II.

It would also force him to denounce the Constitution of the United States, as he himself approvingly noted at the Church Teaches Forum, in Louisville, KY on July 16, 2016:

Religious liberty thus understood [in the text of Dignitatits Humane] has been protected by the First Amendment to the United States Constitution.

In a follow-up report from LifeSite News, Cardinal Burke is also quoted as saying at the Rome Life Forum:

The freedom to practice a false religion, however, is precisely that which the Second Vatican Council insists upon as a civil right in Dignitatis Humanae.

It states that this so-called “right” extends even to those “who do not live up to their obligation of seeking the truth and adhering to it and the exercise of this right is not to be impeded, provided that just public order be observed.” (cf DH 2)

Do not be fooled by the caveat concerning “just public order.” The Council has left it to the State to determine what justice in the public order entails, and we know all too well how that is going.

The bottom line is simply this – the Council plainly teaches that man has a positive right to practice false religion; a right founded in the very dignity of the human person as made known by Divine revelation. (ibid.)

As the Church has always taught, no such right exists. Period. Such evil as false religion can at best be tolerated.

In conclusion, Cardinal Burke will no doubt receive uncritical applause from the usual cast of characters (some of them con-trads) for the true statements he made with respect to the Kingship of Christ and religious freedom; thereby leading the foolish to look up to him as a trustworthy voice for the true Faith.

In this sense, he is perhaps even more dangerous than the Walter Kaspers of the world.

You see, unless and until Cardinal Burke ceases casting his lot with the modernists, defending Vatican II and all that goes with it, his flirtations with tradition will ultimately only contribute to a continuation of the current ecclesial crisis and the loss of countless more souls.

Pray for Cardinal Burke. It appears that he is a man wildly conflicted and terribly disoriented, but one who still seems to hear at least the whisper of tradition.

For the good of souls, his own included, may he embrace it in its fullness before its too late.