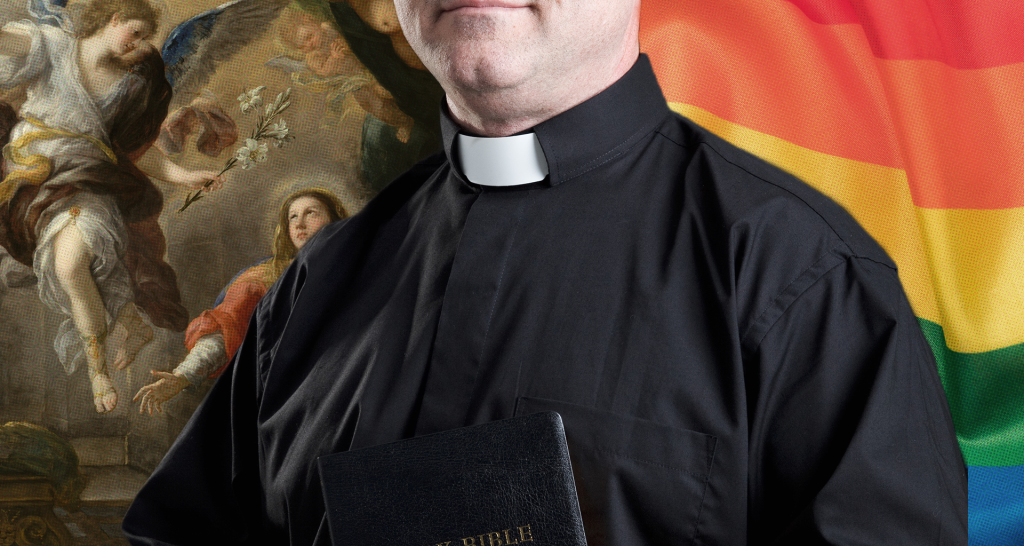 Over the past week, a number of neo-conservative Catholic media outlets – National Catholic Register, Catholic News Agency, LifeSite News – have come out in praise of a recently published study conducted by the Ruth Institute titled:

Yes, you read that correctly; the study was conducted in order to address a conundrum that, in the scope of perplexity, is akin to the burning question on every meteorologists’ mind: Is rainfall related to moisture in the clouds?

Even so, the Register gushed: “The Ruth Institute published a new report that dares to ask a question many researchers — and Catholics — have been afraid to ask.”

Really? The only people unwilling to ponder the question are the homo-clerics and their defenders who damn well know the answer better than anyone else: Of course Catholic clergy sex abuse is related to homosexual priests!

Not to be outdone, LifeSite News called it a “landmark study” and reported that its “findings are stunning.”

The principal author of the study is married Catholic priest, Fr. D. Paul Sullins, an Episcopal convert and sociologist who was ordained in 2002 by, get this, Uncle Ted McCarrick. (What are the chances!)

On November 2, Sullins held a press conference to introduce the study. As reported by Catholic News Agency, he told those present that there’s a “very strong probability” that the surge in abuse in past and present is “a product, at least in part, of the past surge and present concentration of homosexual men in the Catholic priesthood.”

Stunning? Not so much. You want stunning? I’ll give you stunning. Among the six “key points” listed in Sullins’ study is the following gem:

Four out of five victims over age 7 were boys; only one in five were girls. Ease of access to boys relative to girls accounts for about one fifth of this disparity. The number of homosexual priests accounts for the remaining four fifths. [Emphasis added]

The first thing that stands out here is the “over age 7” benchmark. Why Sullins chose this measure as opposed to pre-pubescent vs post-pubescent is anyone’s guess, I suppose, but this may become clearer as we proceed. Stay tuned…

More disturbing is Sullins’ contention that a full 20% of the disparity between male vs female victims is attributable to the clerics having greater access to the former.

One may recall that the USCCB-funded (i.e., the hardworking Catholic faithful-funded) John Jay Cover-Up… I mean, Report, also went to great lengths to make the case that greater access to boys somehow added to the overwhelming number of male victims.

Sullins does take issue in his study with the John Jay Report’s “insistence that the abuse of males was purely situational and opportunistic” [emphasis added], but pay close attention to the wording. Clearly, he is just fine with the notion that a considerable number of priests that molested adolescent males aren’t really homo-deviants.

Sorry, pal, but any man that even hints at such a thing is, in all likelihood, battling homo-demons of his own. Perhaps this is why Sullins, according to CNA:

In other words, a propensity for sexually abusing adolescent boys isn’t so much a homo-deviant male thing; it’s a homo-deviant priest thing, at least in certain circumstances that he will explain soon enough. Because, you see, God forbid anyone should suggest that homo-deviancy in and of itself tends toward such activity!

According to Sullins, his research reveals that in the 1980’s, when incidence of homo-clerical abuse was at its highest known levels, 16% of priests were of the homo-deviant variety – eight times the proportion found in the general population.

What I say in the paper is that when homosexual men were represented in the priesthood at about the same rate as they were in the population, there was no measurable problem of child sex abuse. It was only when you had a preponderance of homosexual men.

When you get up to 16 percent of priests that are homosexual, and you’ve got eight times the proportion of homosexuals as you do in the general population, it’s as if the priesthood becomes a particularly welcoming and enabling and encouraging population for homosexual activity and behavior.

So, as Sullins sees it, a handful of homo-clerics here and there poses no threat to our male children, but when their numbers reach critical mass (whatever that number may be), then all bets are off.

This, in Neo-Con Candy Land, is what qualifies as a landmark study.

Look, this ain’t rocket science, folks. A church (in this case, the conciliar one) that is willing to compromise on matters of faith, is also necessarily a church that will be lax with respect to morals. The two always go together, and as I argued in a recent post, the crisis at hand (no pun intended) is first and foremost doctrinal in character; the moral rot being best understood as a consequence thereof.

From 1965 to 1995 an average of at least one in five priests ordained annually were homosexual.

To arrive at such a conclusion, researchers are largely relying upon survey responses given by the priests themselves. If the results suggest 20%, then you can bet your grandmother’s heirloom Rosary that the real number is well north of that.

In any case, the surge in homo-clerics didn’t happen in a vacuum; it took the abandonment of faith as institutionalized at Vatican Council II to pave the way for the pink invasion.

So, what are we to make of Sullins’ study? According to the author, well… pretty much nothing, but don’t you believe it. As reported by CNA:

Sullins was clear he wanted to avoid recommending any particular action based on his research.

This is a lie.

“I would certainly not recommend that we remove all homosexuals from the priesthood,” he said. “The reason for that is: the abuse is not necessarily related to someone’s sexual orientation.”

Excuse the Hell out of me! This from the same, ahem… expert researcher whose study states:

This guy is all over the place, and I suspect that he is so by design. And why? In order to give homo-weary Catholics some sound bites they can feel good about; when in reality his “study” is little more than an elaborate pseudo-scientific ruse that aims to provide cover for so-called “homosexual men in the priesthood.”

As reported by CNA:

He [Sullins] cited his knowledge of men with same-sex attraction who are “strong, faithful persons,” adding “I would hate to have some sort of litmus test for that.”

If the Catholic Church in the U.S. were like most institutions, where two-thirds of abuse victims were female, people would reject the suggestion to eliminate all heterosexual men from the priesthood. That suggestion would be an “ideological reaction,” he said.

NB: Whenever and wherever one sees the word “ideological” attached to matters ecclesial, a Bergoglian rat is almost certainly close at hand.

The CNA report goes on:

He [Sullins] suggested the priesthood should reflect the general population, as a sign priests are selected for “holiness and commitment to Christ and the things that we would hope would make for a good priest.”

Aha! At last we have arrived at the punchline.

Sullins study is but a Synodesque dog-n-pony show designed to hypnotize and confuse gullible Catholics while surreptitiously making a predetermined case; namely, an argument in favor of ordaining homo-deviants.

Because the enemies of the Church are growing nervous. They know full well that the majority of Catholics of all stripes have had it up to their eyeballs with effeminate, limp-wristed queers in Roman collars and are finally coming to the unavoidable conclusion that such men, whether they ever commit sexual abuse or not, are simply unsuitable for Fatherhood.

[Find value in this post? If so, please help me produce more. The Catholic Inquisitor (akaCatholic’s sister) is growing, but still in start-up mode. It’s like a child that needs time and attention, and bringing it along is taking a financial toll. Please consider helping out as you’re able. Thanks!]