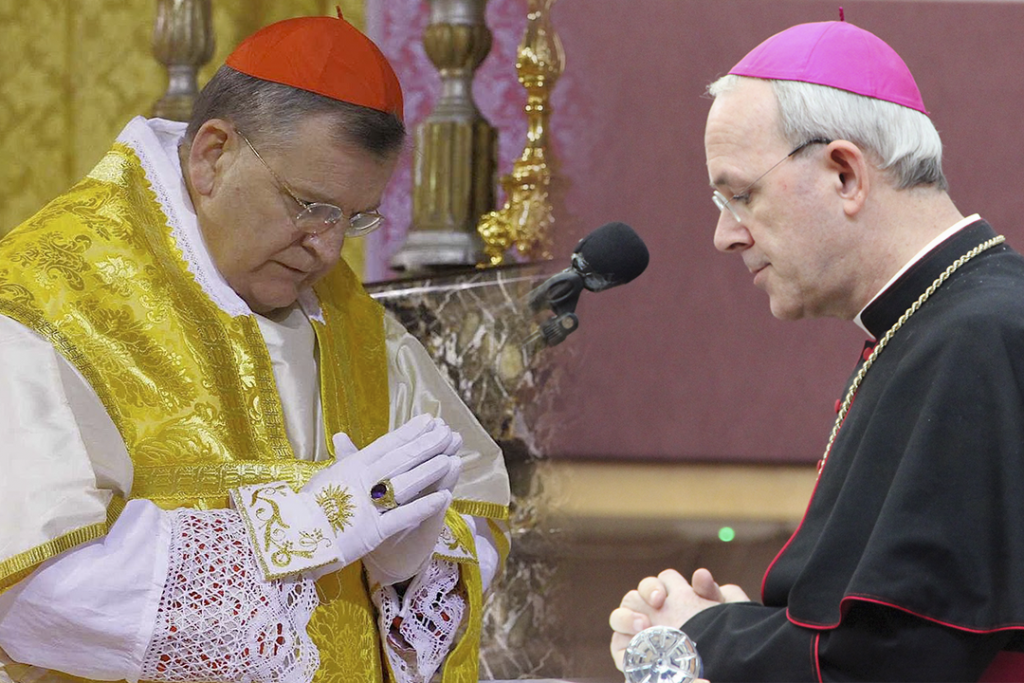 Reports are circulating that Bergoglian Rome has taken steps to limit the degree to which Bishop Athanasius Schneider and Cardinal Raymond Burke are able to travel and interact with the faithful at live events.

As reported by Gloria TV:

The Vatican has asked Auxiliary Bishop Athanasius Schneider not to leave Astana archdiocese for more than 30 days a year, Schneider told katholisch.de.

The nuncio in Washington D.C. told the American bishops not to invite people like Cardinal Raymond Burke for talks, and when Burke’s presence cannot be avoided, they should not take part in such events, Marco Tossati reported on November 6.

Naturally, these transparent attempts on the part of Bergoglio & Co. to silence two of their highest-profile clerical critics have provoked no small amount of shock and outrage on the part of many Catholics.

I’m not one of them.

Shock? Please, these restrictions, which are tantamount to a gag order, are coming directly from the same guy whose response to Archbishop Viganò’s scathing testimony was “I will not say a single word.” This is how Bergoglio rolls, folks. 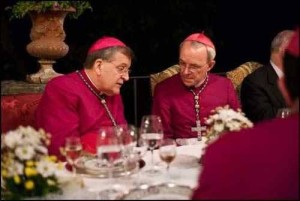 As for outrage, I’m not exactly livid over the idea that the Banquet Bishops will presumably headline a handful fewer conferences and be wined and dined just little less in the coming year.

Exactly what good has their globetrotting actually done anyway?

Amoris Laetitia and its assorted blasphemies and heresies have quietly become yesterday’s news – that is, all but fully embraced as the “new normal” – and Bergoglio is still maneuvering and conniving in furtherance of his assault on the Faith virtually unopposed; e.g., the recently concluded Synod-slash-dance-party.

Maybe a little less time composing presentations, packing suitcases and shuffling through airport security will afford Burke an opportunity to deliver on that long ago promised “formal act of correction.”

Needless to say, I jest, as no such correction is forthcoming. This being so, one cannot help but wonder exactly how the Bergoglians managed to convince Burke (blackmail may be more accurate) to retreat on this point. Clearly something happened, and it certainly wasn’t a move toward orthodoxy on the part of the Argentinian.

With this in mind, the effort to clip Burke’s wings and take a bite out of his public event schedule goes to show just how vindictive and petty the Bergoglians truly are.

Readers may recall what Francis said of Burke following his 2014 dismissal as Prefect of the Apostolic Signature and his subsequent appointment as Patron of the Order of Malta:

He [Burke] thanked me in very good terms and accepted my offer, I even think he liked it. Because he is a man that gets around a lot, he does a lot of traveling and would surely be busy there.

As his about face on the formal act of correction amply demonstrates, Burke has already been duly castrated, publicly humiliated and effectively rendered harmless to the Bergoglian cause. This means that the move to keep him from “getting around” so much is more personal than anything.

Bishop Schneider, for his part, is downplaying the situation, telling LifeSite News:

I am sad that such news is spreading. I was asked on behalf of the Holy See to reduce the frequency of my travels outside my diocese, so that their duration will not exceed the limits indicated by Canon Law (i.e. 30 days). Therefore there is no travel ban.

While some may feel compelled to consider this evidence of Schneider’s docility; it’s cowardice, plain and simple, and this humble son-of-the-Church shtick is getting old. Bishop Schneider can play the nothing to see here card all he wants, but it’s entirely obvious that he’s being singled out for his defense of the Faith, such as it is, in the face of the Bergoglian menace.

Furthermore, as Gloria TV pointed out, Bishop Schneider’s interpretation of Canon Law is questionable at best:

Allegedly, Schneider was asked to follow Canon 410, one of the many elastic clauses in Canon Law, which obliges an auxiliary bishop to reside in the diocese except if he is fulfilling “some duty outside the diocese” or for his one month vacation.

Since Schneider is not travelling for vacation but for religious duties like Mass celebration, confirmations, and preaching, the one month limit contradicts Canon Law. Further, there is no information that Canon 410 has been enforced except for Schneider although there are multiple leftwing airport bishops.

Bottom line: Jorge Bergoglio is a ravenous wolf in papal clothing and everyone with even a shred of sensus Catholicus knows it. It’s time for shepherds to shepherd for the benefit of the innocent. At this point, Burke and Schneider aren’t so much victims of an injustice as they are accessories to Bergoglio’s crimes.

Let’s pray that both of these men will make good use of their newfound free-time to reflect on their failure to adequately protect the flock, seeking the grace necessary to do what desperately needs to be done; namely:

To publicly proclaim Jorge Mario Bergoglio’s heresy and contumacy; making known to all the Church the sentence which he has pronounced against himself; making clear that by his own will he has turned away and separated himself from the Body of the Church, and that in a certain way he has abdicated the Pontificate… (see Fr. Pietro Ballerini)

It’s time for some papal seclusion