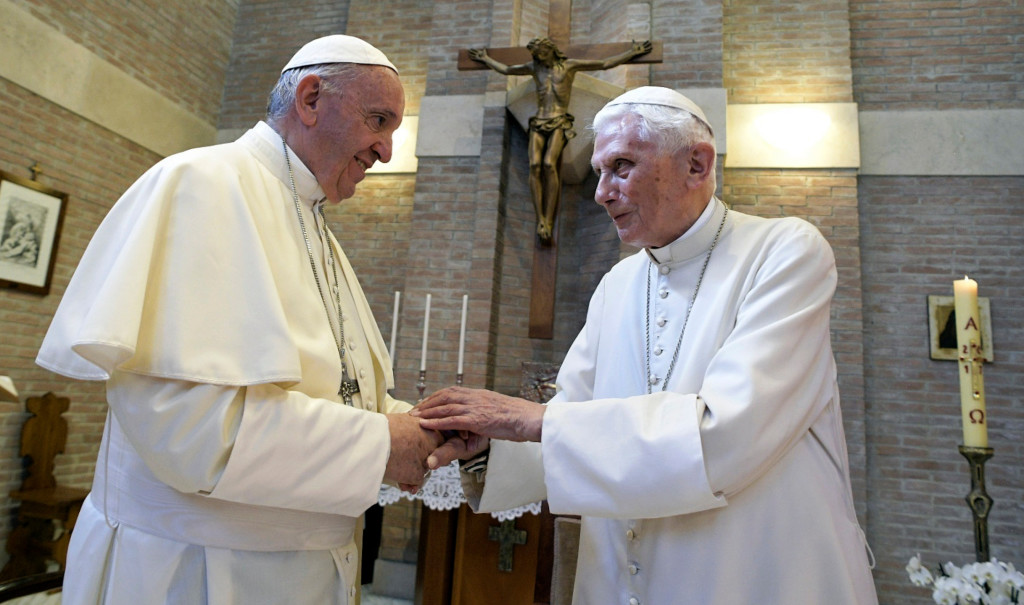 Was the 2013 renunciation of Benedict XVI a valid act of resignation?

Almost immediately after issuing the Declaratio of 10 February 2013, there were serious scholars, clerics and religious – men holier and more learned than I – calling its validity into question. Their arguments were largely based upon the Latin text of the Declaratio wherein it is evident that BXVI did not intend to resign the papal munus (understood by canonists to mean office), but rather only the ministerium (that is, the active exercise thereof).

In May of 2016, Archbishop Gänswein, himself a Doctor of Canon Law, confirmed as much when he publicly stated:

He renounced not his duties, which are, irrevocable, but the concrete execution of them.

Commenting further on Benedict’s intent, Gänswein plainly said that Benedict’s act had “profoundly and permanently transformed papal ministry.” It has thus been, according to him, “expanded” into a “quasi-shared ministry” that has “a collegial and synodal dimension.”

Any attempt to so split the papacy would, of course, render the act invalid. In light of this, I wrote shortly thereafter:

I have also noted in this space, on many occasions, that there are numerous good reasons to believe that BXVI was forced to step down, or aside as the case may be. Furthermore, he has indicated to the outside world that he is in some sense imprisoned (e.g., he referred to himself as a “cloistered monk” whose state “does not allow” him to leave apart from the “invitation” of “the Pope”).

In sum, there are serious reasons to believe that foul play was, and is, involved in this matter. As I write, with Archbishop Gänswein appearing ever more clearly as the St. Gallen Mafia’s inside man, this sense is growing even among those who once dismissed such claims as mere conspiracy theories.

In all cases, an invalid resignation would necessarily mean that conclave 2013 and its results are likewise invalid; i.e., Francis is an anti-pope.

My opinion on these matters hasn’t changed.

I have, however, come to recognize that there are far bigger issues at hand, specifically, those concerning the true identity of the institution that Benedict once led and the office from which he allegedly resigned, the same that “Francis” presently claims to lead and to occupy.

Those familiar with this blog know very well that I do not for a moment believe that theirs is the Holy Roman Catholic Church, dispensing to the innocent as it has, and does, so much poison. The implications of this awareness are tremendous, and I am prayerfully doing my best to make sense of them.

In the meantime, I am convinced beyond all doubt that Jorge Bergoglio simply is not Catholic; the man is a blasphemous heretic who has made it plain to all with eyes to see that he has severed himself from the Body of the Church, if indeed he was ever attached to it.

He is, therefore, an anti-pope for this reason as well.

Given that very few among us are well-versed in either Latin or Canon Law, not to mention the fact that there is a great deal that we simply cannot know surrounding the events of February 2013, it is my opinion that the latter reasoning (Jorge’s notorious, pertinacious heresy) is more readily accessible to the moderately well-formed layman’s mind. As such, this is where I tend to focus my attention with regard to the Bergoglian anti-papacy.

As for those far bigger issues, I realize that many sincere readers do not share my concerns; i.e., a good number of readers tend to view the conciliar church as the Holy Roman Catholic Church, albeit infected with Modernism even to the Office of Peter. All of us are on a quest to discover the truth, and I was in just this place not that long ago.

For this reason, I believe that there is value in demonstrating that Jorge Bergoglio is an anti-pope due to his heresy, even apart from those bigger issues, for the benefit of those who, at present, cannot see them. Truth, one hopes, will then lead to more truth…

My own opinions hopefully made clear, let’s return to the topic at hand.

I have no bones to pick with those who are making objective observations that support the position that the so-called resignation of BXVI was invalid.

Where I am compelled to issue a warning concerns the fanciful notions that some have begun to attach to Benedict, spinning his cowardly and confusing behavior, as well as his scandalous silence, into a deliberate and heroic attempt to save the Church from diabolical forces.

The reason I have chosen to address the matter in this space is that even some otherwise clear-minded “traditionalists” are evidently beginning to latch on to this narrative, in spite of the fact that it is impregnated with the poison of conciliar conservatism.

In my experience, one of the most prolific outlets disseminating these ideas is the From Rome blog, which is run by Brother Alexis Bugnolo, a man whose sincerity I do not doubt in the least, but whose ideas (in part) are dangerous nonetheless.

In a recent and rather lengthy post (which I invite you to read HERE), Br. Bugnolo proposed to inform readers “what happened [re: Benedict’s renunciation] and why it happened and what it all means.”

After sifting through certain pieces of evidence and speculating as to their significance, he ultimately, and with great confidence, proposes:

From all this, then, we can say decisively and with great certitude that the Declaratio was written to oppose the St Gallen Mafia and to lay down a maneuver against them. It was not a surrender, but it was made to look like a surrender. [Emphasis in original]

In short, Br. Bugnolo believes that Benedict, by making room for the Bergoglian anti-papacy and sitting silent in the face of the evils he is promoting with reckless abandon on a near daily basis, is somehow outsmarting the bad guys and protecting the Church.

The purpose of the Declaratio was NOT to renounce the papal office, it was to Uproot the College of Cardinals as an institution from the Church, so as to save the Catholic Church from the complete Masonic infiltration of that institution. [Emphasis in original]

According to Br. Bugnolo’s version of what happened and what it all means, Benedict XVI is not the only putative pope whose mozetta is best viewed as a superhero’s cape. In a previous post, he told readers:

Pope John Paul II strengthened the Bulwark of the Church against the AntiChurch.

If this doesn’t raise a red flag for traditional Catholics, nothing will! And yet, some still delight in Br. Bugnolo’s creative musings, which paint Benedict as a misunderstood martyr, valiantly going it alone for the sake of Christ’s Church.

As the post under discussion makes clear, Br. Bugnolo imagines that John Paul II was a visionary who laid the groundwork for Benedict’s allegedly brilliant maneuver:

… it was Pope John Paul II, in 1983, who by adding munus as the canonically required object of the verb “renounce” in canon 332 §2, actually created the canonical possibility of an invalid renunciation in the case of a pope who renounced something other than the petrine munus! [which] allowed a Roman Pontiff to give the appearance of a valid resignation, so as to deceive the forces of Freemasonry in the Church. [Emphasis in original]

In furtherance of this theory, Br. Bugnolo asserts:

The logic (if you will) is obviously flawed inasmuch as it validates what every serious Catholic recognizes as invalid; namely, the utterly false notion that the Papacy is comprised of individual parts (an office and a ministry) that are subject to division. Rather is it the case that the Papacy is, by the will of Christ who established it, one; it is whole and indivisible. Therefore, the man who is pope does not have the right to renounce only a portion thereof, as if to retain what allegedly remains, no more than a member of the Church has the moral right to renounce a portion of the one true faith and yet remain numbered among her faithful.

In any case, Br. Bugnolo finds cause to conclude:

In this way, both Pope John Paul II and Pope Benedict XVI have acted with great foresight and angelic prudence.

Evidently, Br. Bugnolo is confused concerning the duty of the pope as elucidated by the First Vatican Council:

This gift of truth and never-failing faith was therefore divinely conferred on Peter and his successors in this See so that they might discharge their exalted office for the salvation of all, and so that the whole flock of Christ might be kept away by them from the poisonous food of error and be nourished with the sustenance of heavenly doctrine. (Pastor Aeternus),

Get that? The popes are divinely endowed with gifts that enable them to discharge their office – not flee from it by concocting fake resignations therefrom, thus making room for a blaspheming heretic anti-pope who will deceive God’s people – as if doing so somehow serves to protect the flock from the poisonous food of error. The very idea is absurd!

With regard to Benedict’s shameful silence in the face of Amoris Laetitia (as discussed in my previous post), Br. Bugnolo seems willing to give him a pass. It’s as if Brother has either forgotten, or changed his mind about, the following post on the From Rome blog, dated April 9, 2016: This ‘Amoris Laetitia’ cannot be tolerated in silence

In this post, written by “The Editor” (perhaps Br. Bugnolo himself), we find:

On account of the universal scandal given by it [Amoris Laetitia], on account of its universal reception by the press as signifying the abandonment of Scripture and Tradition as the remote Rule of Faith in the Church; inasmuch as it is recognized by all and the author itself to contain novel doctrines, which contradict the past ones and past pastoral practice, every Catholic is obliged to REJECT and CONDEMN it AND DISREGARD the authority the author pretends to exercise in it. [Emphasis in original]

Get that? Every Catholic! He went on to conclude:

In the coming day and weeks, we shall see which of these [Cardinals of the Roman Church, the clergy of Rome and the bishops of the Catholic Church] cleaves to Christ and which deny him by an effeminate silence.

How much more does this apply to the man one considers the Bishop of Rome! And yet, more than three-and-a-half years have since passed and Benedict XVI’s most noteworthy response to Amoris Laetitia (beyond praising its author) has been nothing but effeminate silence!

No, with Benedict XVI were are not witnessing the behavior of a pope acting to “save the Church;” rather, we have before us a man who more readily fits the following taken from the same post on the From Rome blog:

Finally, it is obvious on account of the gravest moral obligation of charity for the whole Church, that these three groups [Cardinals of the Roman Church, the clergy of Rome and the bishops of the Catholic Church] are obliged to act, and that if they do not act, each of them individually merits ETERNAL DAMNATION for having loved themselves more than Christ and His Church. [Emphasis in original]

In conclusion, it bears repeating, I believe that Br. Bugnolo is entirely sincere. He’s obviously very knowledgable in Latin and Canon Law, and he makes a good contribution to discussions concerning the validity of Benedict’s apparent renunciation.

That said, readers would do well to dismiss – or better still, avoid altogether – his fanciful theories suggesting that BXVI is somehow providing a service to the Church, protecting her and the faithful in her care from the menace of evil men.