Home
Blog Post
Gänswein on Benedict: Someone is lying 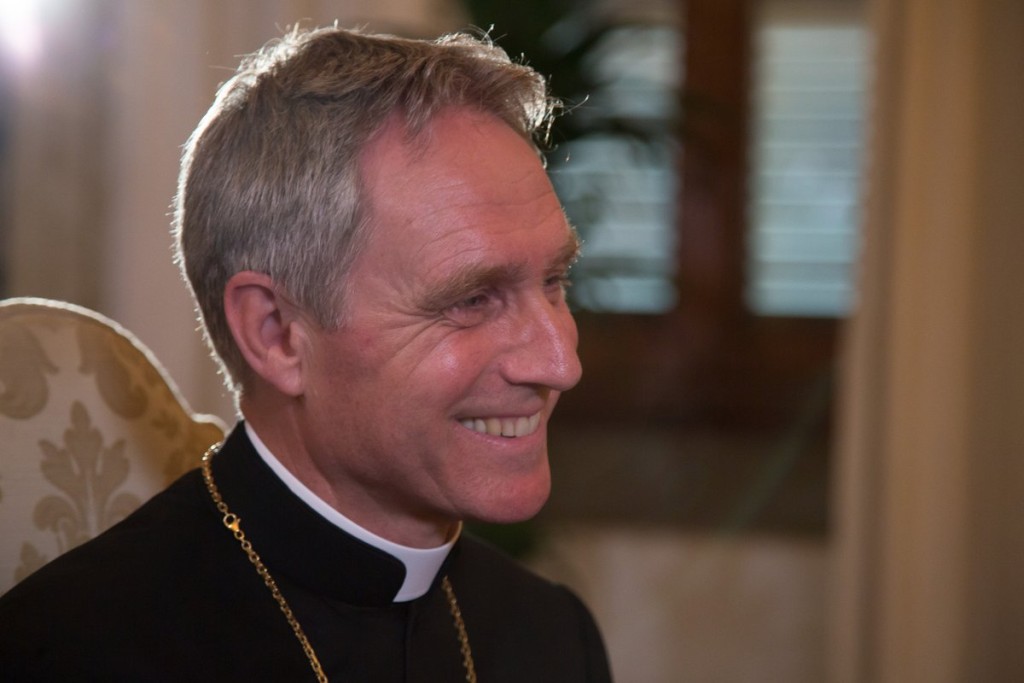 In an April 12th interview with the Italian daily La Repubblica, Archbishop Georg Gänswein confirmed that Benedict the Abdicator has read Amoris Laetitia  and is well aware of the crisis surrounding it.

Even so, according to Gänswein, the Pope Contemplatus has “no intention of entering controversies that feel far away from him.”

Really? It feels far away from him?

It would seem that the only persons who could possibly feel distant from the havoc being wrought on the Church by the blasphemous and heretical text of Amoris Laetitia  are those who are either outside of her, invincibly ignorant of the magnitude of the situation, or so self-absorbed as to be utterly ambivalent.

So, which one is Benedict?

My money is on none of the above; rather, it seems to me that Benedict is a man who dares not to speak.

“Pray for me, that I may not flee for fear of the wolves.”

From the earliest days of his pontificate, Benedict made it plain that, for him, the urge to take flight in the face of diabolically driven forces was going to be an ever-present temptation; one to which he has apparently succumbed.

Sure, the neo-conservative crowd will scoff at such a conclusion; dismissing it as a conspiracy theory unworthy of consideration, and yet it is the only charitable option.

To insist otherwise is to suggest that Benedict no longer holds the Faith; for instance, as it concerns the immemorial practice that is “based on Sacred Scripture … of not admitting the divorced and remarried to the sacraments” such as he confirmed it in Sacramentum Caritatis.

Does anyone really want to argue that Benedict now wishes to repent of this teaching?

Look, the man is a dyed-in-the-wool modernist, but there is absolutely no reason to believe that this is the case.

This being so, he, more so than anyone else alive at this moment, should find himself compelled to move swiftly into the controversies surrounding Amoris Laetitia!

I suspect that he does, and yet, there is another force of greater intensity that keeps him from doing so…

In these days of unprecedented turmoil; much of it emanating from the newly “expanded” Office of Peter, the weaker among us apparently find the abandonment of reason and the denial of common sense more attractive than simply acknowledging the inconsistencies and mysteries surrounding the status of Benedict XVI and therefore his humble replacement.

For my part, I prefer to look at these things head on; unafraid to admit that I don’t know the answers, but unwilling to deny that they are of the utmost importance.

For instance, Archbishop Gänswein said that Benedict has “never regretted” resigning, and that he is confident that he “did the right thing, for the Lord’s sake and for the good of the Church.”

So let me make sure I got this right…

Benedict is perfectly aware of the grave crisis of faith stemming from Amoris Laetitia – the Love Letter to Satan that was published on Peter’s letterhead at the hand of the very man for whom he stepped aside – and he honestly believes that this is “for the good of the Church”?

Archbishop Gänswein added that there is a “touching peace, which suggests that in his conscience there is the certainty of having done well in the sight of God.”

I am not buying a word of it, and frankly, why anyone with even a drop of common sense does is beyond me.

This talk about Benedict’s contentment has all the hallmarks of protesting too much. In fact, if I were a betting man, I’d wager very heavily on the likelihood that Benedict is a man tormented, but who, motivated by fear, is at pains to put on placid airs.

That is, when he is “allowed” to make public appearances.

In October 2014, Benedict responded by letter to an invitation that he received to participate in a Pontifical High Mass as part of a Summorum Pontificum pilgrimage in Rome.

“My state as a ‘cloistered monk’ does not allow me a presence that is also exterior. I leave my cloister only in particular cases, [when] personally invited by the Pope.”

In all sincerity, it amazes me just how many otherwise intelligent people seem to find no cause for concern whatsoever in the fact that Benedict is not “allowed an exterior presence” unless personally invited by Francis.

This is a far cry from what Benedict said when he announced his resignation:

“With regard to myself, I wish to also devotedly serve the Holy Church of God in the future through a life dedicated to prayer.” (Benedict XVI, February 11, 2013)

How did we get from choosing “a life dedicated to prayer” to becoming a “cloistered monk” who can only leave his cloister when personally invited by the Pope?

The solitary conclusion that can be drawn is that the veritable imprisonment of which Benedict spoke wasn’t his own idea; it had to have come from Francis himself.

This, to me, is of monumental importance, and the simple fact that this information has been made known to us is quite remarkable in itself.

Consider: In spite of whatever fears he may have, Benedict made it a point to let the world know that he is not free to come and go!

I think this qualifies as rather big news; don’t you?

Look, there’s nothing “normal” about any of this “Pope Emeritus” nonsense. If one of the new features of the newly “expanded” Petrine Office concerns the “cloistering” of the “Emeritus,” whose freedom of movement requires the “personal permission” of the “active” bishop in white, don’t you think it would have been mentioned at some point between February 2103 and October 2014?

As it is, this particular tidbit of information was made known in a clever, almost underhanded, way.

The tone of the letter reads, “As you know, I am bound to the cloister unless Francis grants his personal permission otherwise…”

The problem is, no one knew this beforehand. If it was known, the invitation would have been sent to, and the RSVP come from, Francis.

Furthermore, it is difficult to imagine that His Humbleness desired that it should ever  be made so plainly known that his “retired” predecessor is being kept under lock and key.

Think what you wish, but it looks to me as if Benedict pulled a fast one in his letter. He had a perfect opportunity to respond to the invitation simply by reiterating what he said back in February of 2013:

I lack the strength of mind and body to accept, but thank you.

He chose instead to get a signed letter before the public letting those who still have the wherewithal to make simple observations know that he is not “allowed to leave his cloister” apart from the “personal permission” of Francis.

Does anything about this sound right?

In an interview with EWTN Germany that aired over the weekend (translation courtesy of National Catholic Register), Archbishop Gänswein said:

“Pope Francis is said to be happy about having a grandfather like Benedict — a ‘wise’ grandfather: an adjective not to be omitted!”

Ah, yes… How often most of us must recall telling our grandfathers to stay home and keep their traps shut unless permission is granted for them to do otherwise…

Of Benedict, Gänswein went on: “His successor often told him that he shouldn’t hide.”

Really? Which is it? Does Francis “often” encourage Benedict to leave his cloister – as if he is freely allowed an exterior presence – or does he require of Benedict a personal invitation from himself prior to emerging therefrom?

Indeed, many are lying; obfuscating, hinting, cowering and the like, but no one – absolutely no one – is speaking plainly and consistently on the matter Pope Benedict XVI.

Unfortunately, very few people seem to care, or perhaps better stated, have the sensus Catholicus to recognize that they ought to care very deeply.

There is more content in Archbishop Gänswein’s EWTN Germany interview that merits our attention, but I will pick up this conversation in a future post.

In the meantime, I wonder, is it really too much to ask of people of good will and good sense to admit that when it comes to the status of Benedict XVI something is terribly wrong?

He is the King of the Universe!