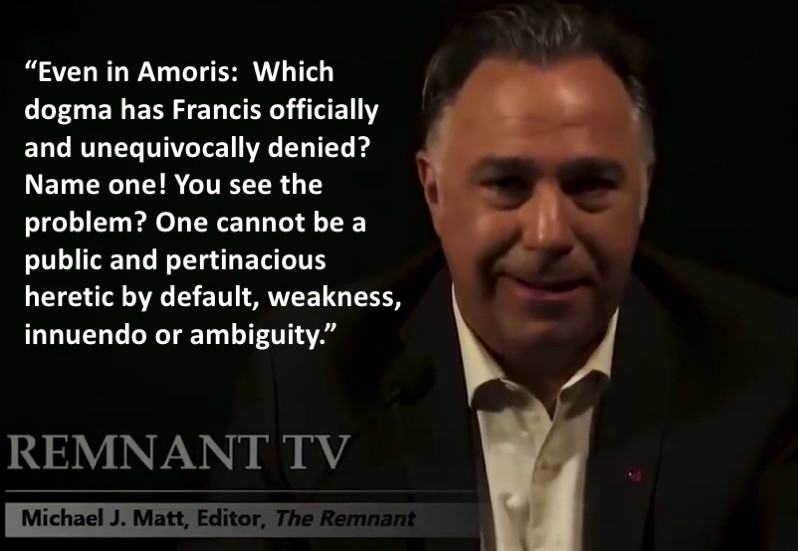 On the opening day of the USCCB Fall General Assembly in Baltimore, Bishop Joseph Strickland of the Diocese of Tyler, TX took to the floor to second a call for a report on the Vatican’s McCarrick investigation, to encourage Eucharistic Adoration at future assemblies, and to deliver the following plea on behalf of orthodoxy:

I’d like to see on the future agendas – and I’ll do whatever work I should do to help make that happen – but a section for each meeting to address the questions of guarding the deposit of faith. I think there are a lot of issues that are circulating around – some are just rumors; some are big questions – but I think I’d like to see on our agenda a section dealing with guarding the deposit of faith.

Strickland is a rising neo-conservative star known mainly for launching pithy Twitter statements in opposition to abortion and LGBT activism. He also seems to be winning fanboys in more traditional circles as well, with one such person on my social media feed reacting to his USCCB intervention by anointing him “a saint in the making!”

A saint in the making? Let us hope and pray that he is. For now, however, the most that we can say of him in the present is that he is either a hypocrite, a coward, or both.

Among the most pressing of “issues that are circulating around” these days are those concerning the blasphemy and heresy that is contained in Amoris Laetitia.

Far more than “just rumors,” the issues involved in this case are inviting a growing number of sincere individuals to ask whether or not Jorge Bergoglio is a formal heretic, an apostate, and thus an anti-pope.

I’d say that these qualify as “big questions,” wouldn’t you?

For all of his sound-bite bravado, Joseph Strickland doesn’t seem to think so, and if he does believe that Amoris Laetitia represents a genuine threat to the deposit of faith, he evidently doesn’t have the Catholic cajones to address them.

With regard to his public position on Amoris Laetitia – a text that ultimately invites those who insist on persisting in mortal sin to receive the Blessed Sacrament that Strickland says he wants the bishops to adore – a thorough internet search yields nary a word of criticism; rather, one finds nothing but praise.

According to him, Bergoglio’s diabolical document is “a beautiful teaching from our Holy Father Francis on the splendor of Christian marriage and the family.”

He goes on to say that “Amoris Laetitia … recalls the essential aspects of the Church’s teaching on marriage and the family which are based on Divine Revelation found in Sacred Scripture and Sacred Tradition.”

It can no longer simply be said that all those in an adulterous situation are living in a state of mortal sin and are deprived of sanctifying grace – even among those who know full well the Divine Law. (see AL 301)

Where exactly does one find this in Sacred Scripture and Sacred Tradition?

The answer: nowhere; on the contrary, one finds these ideas condemned nearly verbatim by the Council of Trent!

The Holy Father offers advice to those who are struggling and facing challenges, especially those in irregular situations, recognizing the uniqueness of each situation and providing them with guidance on the path to fully realizing the common and constant teaching and care of the Church in their own lives.

And just what sort of advice does Bergoglio offer to those so struggling?

He tells them that they just might be in “a concrete situation which does not allow him or her to act differently and decide otherwise” (ibid.), and far worse, he tells them that persisting in adultery may very well be “what God himself is asking amid the concrete complexity of one’s limits” (cf AL 303)!

That’s some “beautiful teaching” from some “Holy Father,” eh?

So much for guarding the deposit of faith.

Strickland’s praise for Amoris Laetitia as cited above was issued in April of 2016 as the text was being made public and it remains available on his blog at BishopStrickland.com. Since then, he has had very little to say about it other than complaining that the text is “distorted by the media.”

I’ve challenged Bishop Strickland directly on this subject more than once on Twitter (it is, after all, his stomping ground of choice), but he has ignored my calls (and those of others) for a clear refutation of the document’s grave errors.

All indications are that he (and other conservative, comfy and cowardly churchmen-of-the-council like Cardinal Burke and Bishop Schneider) are hoping that, if only they ignore them long enough, the blasphemous heresies found in Amoris Laetitia will simply fade from everyone’s memory.

This, they seem to imagine, will allow them to stay focused on what appears to be their dual priorities; A) maintaining their benefices by staying in Jorge’s good graces, and B) growing their popularity by targeting the crisis du jour and low-hanging fruit issues like LGBT activism and abortion rights.

Unfortunately for them, however, Jorge has no intention whatsoever of allowing Amoris Laetitia to be shelved.

In an address to the USCCB General Assembly given on the same day as Bishop Strickland’s passionate plea to guard the deposit of faith, Papal [sic] Nuncio to the United States, Archbishop Christophe Pierre, challenged the body on behalf of the Heretic-in-Chief:

The pastoral thrust of this Pontificate must reach the American people, especially as families continue to demand of dioceses and parishes the accompaniment envisioned by Amoris Laetitia.

Oh, yes… so much demand, you know, like all of those grassroots protests that were organized against the Traditional Roman Rite back in the 1950’s.

Be that as it may, Amoris Laetitia is going nowhere; and what’s more, for the genuinely confused it remains a dependable litmus test for revealing who among the alleged defenders of tradition – clerical or otherwise – is truly concerned with guarding the deposit of faith and who has other, more worldly, priorities.