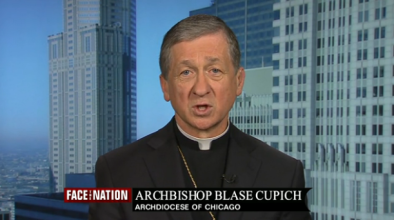 “Some are asking if he’s America’s Pope Francis.”

It was a cringe worthy spectacle indeed as the recently appointed Ordinary of Chicago – sporting the standard issue, post-Vatican II, episcopal business suit with a pectoral cross (presumably) neatly tucked out of plain sight – spoke far more like a seasoned politician stumping for swing votes than a Successor to the Apostles engaged in the evangelizing mission of the Church.

As for Blasé Cupich being “America’s Pope Francis,” I’d say there appears to be considerable merit to the idea given the fact that he, just as the real Bergoglio so often does, carefully avoided any mention of Jesus Christ throughout the entire course of his ten minutes of national air time.

In any case, the portion of the interview that has garnered the most attention, and rightly so, was Cupich’s comments concerning Communion for pro-abortion politicians.

After pledging his undying commitment to Almighty “dialogue,” he said:

The Eucharist is an opportunity of grace and conversion. It’s also a time of forgiveness of sins. So my hope would be that that grace would be instrumental in bringing people to the truth.

As others have already pointed out, this is a complete inversion of Church teaching as seeking forgiveness is the gateway to Holy Communion; not vice versa.

For my part, I’d like to take a look at some of the less-discussed portions of the interview, with the horrifying thought in mind that Blasé Cupich is perhaps representative of the kinds of men, with an occasional anomaly thrown in here or there, whose stock will continue to rise during the pontificate of Pope Francis; while the Raymond Burke’s of the world are either intimidated into silence or simply put out to pasture.

These would be the very same men who, arguably, given a Franciscan reign of just several more years, may very well find themselves in a position to steer the overall direction of the Universal Church for decades to come as they go on to appoint seminary rectors and vocations directors; some taking up positions in the Roman Curia, and others being granted the privilege of wearing the red hat.

Speaking for himself and no doubt other Bergolgians, Archbishop Cupich expressed his intention to emulate the popular Pontiff ever more closely moving forward.

What I find to be very interesting in the Francis effect as people call it, is that people do have a sense that the church is listening to them, and also that he is speaking to their deepest desires … And so, he is trying to make sure that we come together and not leave anybody behind. And I think that is something that I want to continue to do in my ministry.

And precisely how does one reconcile the goal of “making sure that we come together” and a deliberate unwillingness to point the way to the solitary means of communion that God has given us; namely, Jesus Christ and His Holy Catholic Church?

Pope Francis has been providing the answer loudly and clearly throughout this most dreadful of pontificates by placing a nearly exclusive emphasis on merely temporal concerns, and also by anointing man himself “the king of the universe!”

Cupich tried to lend historical perspective to Pope Francis’ impact on the common man by sharing what he referred to as a “nice phrase that I heard.”

If this were a presidential debate, Cupich’s “nice phrase” would have been hailed as sound bite gold. To her credit, however, Norah O’Donnell sought clarificaiton.

“What specifically does that mean, ‘do it,’” she asked?

Pointing to the Holy Father’s approach to economic policy as an example, Cupich proposed:

He [Francis] is making it [the teachings of John Paul II and Benedict XVI] more precise I think because of his own experience in Argentina and being very close to the poor on a day-to- day basis. I think that gives him a different metric, a different way of seeing what the teachings of the church are in real terms. He is putting emphasis on the real life of people and bringing yet the ideas to bear upon the real life situations of folks.

He’s suggesting that the teachings of Francis’ two most recent predecessors, neither of which were bastions of orthodoxy, were perhaps a bit “too doctrinal” to be considered relevant by the man-on-the-streets; their pontifications weren’t quite “real” enough for ordinary folks to embrace.

With this, Cupich may very well be providing a snapshot of the pope’s own manner of thinking, in which case one can only imagine the extraordinary disdain he must harbor for the likes of Pope St. Pius X and those Roman Pontiffs who reigned before the Council!

So much for continuity!

After waxing Democrat on the topic of immigration reform, Cupich was then asked to address the matters of so-called “same-sex marriage” and gay parenting.

His response was typical of those church-of-man bishops who practice not the mission of the Catholic Church but rather a brand of quasi-religious diplomacy that is really best understood as a political endeavor.

When pressed by the highly skilled O’Donnell, Cupich eventually affirmed that gays can indeed be “good parents.”

Unfortunately, she stopped short of asking him to define what it means to be a “good” parent. Even so, I suppose we know very well what isn’t included in that definition.

One of the things that stood out the most in this portion of the interview was the archbishop’s rather odd appeal to the audience’s most basic inborn instincts as he repeatedly attempted to deflect attention toward, “People who as mothers and fathers coming together in their love continue the human race.”

He actually employed this “survival of the species” spin no less than three times, as if to establish solidarity with those insightful Face the Nation viewers who are of the sort that like to remind their drinking buddies, “If everyone was gay, there’d be no more babies! Hyuk, hyuk, hyuk.”

If that’s not embarrassing enough, Archbishop Cupich twice referred to those who “take the risk of bringing children into the world.”

I suppose one man’s “punishment” is another man’s “risk,” but in neither case can it be said that that man thinks like a Catholic!

As he did throughout the entirety of the interview, Cupich qualified his comments often with a wimpish, “Well, I think,” presumably just to be certain that no one came away with the impression that the Catholic Church proposes objective truths as opposed to mere opinions that carry no greater weight than any other.

For example, he juxtaposed gays who adopt children with natural parents saying, “I do think there is something unique about a man and woman coming together and bringing children into the world.”

A risk? Something unique?

Move over, St. Peter! This New Pentecost thing sure does boast some soaring rhetoric, doesn’t it?

In a healthier age, one might be tempted to ask of a bishop who so framed mankind’s faithful response to the Creator’s most generous directive to be fruitful and multiply, “Is he an idiot?”

As it is, the answer is no, Archbishop Blasé Cupich is no idiot; he’s a rising Bergoglian star, thank you very much.

Signs of the times