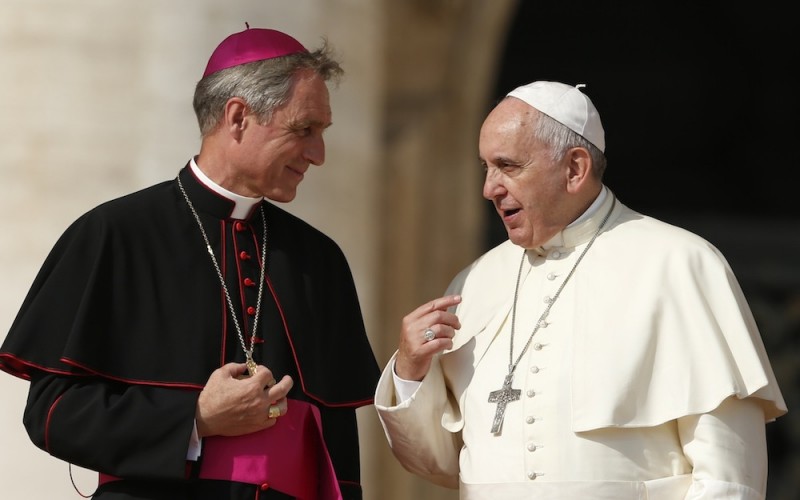 Our friends at the Rorate Caeli blog have had a bad week, or perhaps better stated, a revealing one.

On May 23, they dutifully published the Holy See Press Office Communiqué denying the recent declaration of Professor Ingo Dollinger wherein he confirmed precisely what had been attributed to him many years ago by Fr. Nicholas Gruner and others; namely, Cardinal Ratzinger, after the “official” publication of the Third Secret of Fatima, had confided to him that the publication was not complete, and the still hidden text warns of “a bad council and a bad Mass.” (I wrote about this HERE.)

But they did more than report the denial; they bought it hook-line-and-sinker, editorializing:

As you may have noticed, we avoided mentioning this matter here, as it also seemed (due to several details of the story) peremptorily non-credible. It is to be hoped that the Pope Emeritus’ unusually strong denials should put this episode to rest.

Is this a case of genuine naiveté, or do the publishers at Rorate Caeli harbor a pro-Ratzinger bias so substantial that no amount of contrary testimony will ever suffice for them to admit that the current “Pope Emeritus” (whatever in the Hell that is) has been duplicitous in the matter?

On May 27, we drew a bit closer to an answer as they posted a new article about “the explosive revelation by Abp. Georg Gänswein on how he (and presumably Benedict XVI) sees the current dual status of the papacy,” written by Father Pio Pace – the pen name of a man described by the publisher as “a very wise, knowledgeable, and highly influential cleric.”

I must admit that, for a number of reasons, I had high hopes for this article.

For one, the revelation (more of a confirmation, really) by Archbishop Gänswein is indeed an explosion of seismic proportions.

Surely, a “very wise, knowledgeable” cleric writing under the shield of anonymity will spare no effort in addressing the implications head on, I thought, perhaps revealing a bit of my own naiveté.

Upon reading the piece, however, it immediately became obvious that I expected too much.

Right out of the gate, Fr. Pace  stated:

It is not doubtful that the document we will consider as the most important one in the Pontificate of Francis will be the exhortation Amoris Laetitia, just as Summorum Pontificum is already for that of Benedict XVI.

The Pontificate of Francis?

Apparently, the explosiveness of Gänswein’s confirmation as to Benedict’s intent and the implications thereof are lost on don Pio; either that or he simply won’t touch it with a ten foot pole.

After parroting the same old blather about the problematic “interpretations” to which Amoris Laetitia may give rise, he continued:

The opposition, despite its attempts of resistance during the two last assemblies of the Synod of Bishops, does not truly manage to find its standing, to find an appropriate response.

Come now, if don Pio was truly wise he’d know that it’s not so much the case that “the opposition” can’t find an “appropriate response;” rather, they lack either the faith, the fortitude, or some combination of each to respond appropriately – namely, by condemning the document in its entirety, in no uncertain terms, by virtue of the blasphemy and heresy that it contains.

Moving on to Archbishop Gänswein’s remarks, don Pio says of the “two pope” proposition, “Theologically, this makes no sense whatsoever!”

God love him for that, but just when it appeared that he might actually be on the verge of addressing the matter plainly, he writes, “One is forced, therefore, to find a ‘political’ meaning.”

Let us hope that the publishers of Rorate Caeli have overstated don Pio’s credentials and he is, in reality, not influential in the least.

No, the faithful Catholic is never forced, when presented with theological nonsense, to “find meaning” in it, political or otherwise; rather, he is called to reject it in favor of what the Church has always believed, taught, and practiced. Period.

From there, he is called to face the implications of said nonsense head on, like a true soldier for Christ; that the truth may be well-defended.

Clearly, don Pio is either unable or unwilling to do either.

In light of the fact that “there is no ambition [among churchmen] willing to face the Bergoglian establishment head on” (no kidding!), don Pio states:

… Georg Gänswein, who receives everyday the cries and lamentations of the Ratzingerians, builds up …the statue of his Pope [Benedict] as an accusing statue of against the Commander, as a ‘contemplative Pope’. And, by the very fact of doing so, he weakens even more the legitimacy of the ‘active Pope’, in the spirit of his nostalgic friends.

He then asks rhetorically:

Are they merely nostalgic? This is the entire question. In reality, they are abandoned. They are in expectation of a strong symbolic stand, which the current situation demands.

This is beyond pathetic.

The “entire question” need not be couched in innuendo; rather, it merits being asked directly:

Was the so-called “resignation” of Benedict a valid act, or is the alleged pontificate of Francis truly nothing more than a dangerous illusion that, ultimately, was hatched in the disoriented mind of a man who thought himself empowered to “expand” and “transform” the Petrine ministry as established by Christ?

These are questions that far too few in Catholic media appear willing to address.

In reality, the “current situation” does not call for “a strong symbolic stand” at all, but rather does it call for all who truly love the Church to condemn grave error by name, and to speak the truth plainly.

Once one decides that the better course of action is to seek “political meaning” in theological nonsense, I suppose that looking for someone, anyone, to take a “symbolic stand” is about the best one thinks he can expect.  Talk about lowering the bar…

Yes, it is true that the Ratzingerians (with whom Rorate Caeli and don Pio appear to be of like mind) “are abandoned,” but let’s be clear:

It is they who first abandoned the effort to measure all things by the light of objective truth in favor of propping up their idol; an aging conciliar modernist whom they are loathe to hold accountable for his assorted contradictions, obfuscations and errors.

If it wasn’t clear already, while Rorate Caeli may have a few more toes in so-called “traditionalism” than most other Catholic blogs, their postings of this past week suggest that ultimately they swim in neo-conservative waters where ideology trumps practically all.

Such are the gifts hidden in both Amoris Laetitia and the confirmation given by Archbishop Gänswein relative to Benedict’s intentions:

As Catholic commentators go about reacting to each of these major contributions to the current crisis, those who are paying close attention will discover exactly who’s who.