Home
Blog Post
Why do so many Catholics contracept? 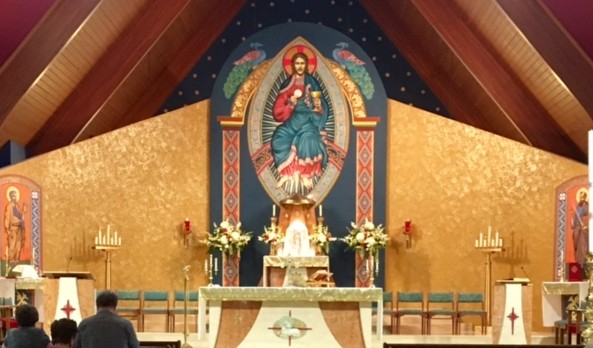 Basilica and Shrine of Our Lady of Lebanon – North Jackson, OH

The text below is excerpted from a conference I gave yesterday at the Basilica and Shrine of Our Lady of Lebanon in North Jackson, OH, as part of their Assumption festivities.

Incidentally, what a wonderful place. I can’t say enough good things about the rector, Chorbishop Anthony Spinosa, who is bi-ritual – Maronite and Latin – and offered very beautiful liturgies in both rites since I’ve been here. His flock is doubly blessed indeed.

The people gathered here are very devout though not exclusively “traditionalist.” (It has been a pleasure to run into some people I’ve known for some time; having met at traditional conferences in the past.)

I have to say that I’m especially grateful for the opportunity to engage an audience like this; knowing that some of what I presented is new to them. As for the conference from which the following is taken, I have little doubt that this is the case, and likely presented a challenge to many here present…

In his Encyclical on Christian Marriage, Casti Cannubii, Pope Pius XI quotes St. Augustine, who, according to the Holy Father, provides “a splendid summary of the whole doctrine of Christian marriage.”

These are all the blessings of matrimony on account of which matrimony itself is a blessing; offspring, conjugal faith and the sacrament. This we regard as the law of marriage by which the fruitfulness of nature is adorned and the evil of incontinence is restrained.

It’s important to note that this citation to “the law of marriage” is not a reference to civil law, or even Church discipline; each of which can change over time. Rather, Augustine is referring to the Divine Law, that which never changes.

Elaborating on the threefold blessing of marriage, the Doctor of the Church says:

As regards the offspring it is provided that they should be begotten lovingly and educated religiously.

This is also expressed succinctly in the Code of Canon Law – ‘The primary end of marriage is the procreation and the education of children.’

The entire canon to which the Pontiff refers reads:

The primary end of marriage is the procreation and education of children; its secondary end is mutual help and the allaying of concupiscence. (1917 Code of Canon Law)

If we really want to know, understand, and embrace the true and unchangeable meaning of Christian marriage; we really need to think about what we just heard.

The primary end of marriage is the procreation and education of children. The mutual help of spouses and the allaying of concupiscence? These are secondary.

There has been no small amount of confusion on these points from the time of Vatican Council II on forward.

And why is that?

Well, there were any number of Council Fathers who thought that this hierarchy of the ends of marriage – a teaching held throughout the centuries – should be de-emphasized.

The reason? An affinity for ecumenism. In fact, as any serious student of the Second Vatican Council can attest, ecumenism and seeking common ground with Protestants served as the impetus for much of what the Council produced.

In the present case, it may be helpful to know that the Anglicans had begun permitting birth control in 1930 (the same year in which Casti Canubii was promulgated), and from that time up until the time of the Council, contraception grew in acceptance throughout much of the Protestant world in general.

Now, the Council Fathers weren’t about to open the door to contraception use for Catholics – not that many of them wouldn’t have done so if given the opportunity – but at the time, Pope Paul VI, who presided over three of the four Council sessions, had already appointed a Commission to look into the so-called “question of contraception,” and many of the bishops there present just assumed that permission was forthcoming.

All of that said, the central point for our purposes is simply this:

By permitting birth control, the Protestants had clearly chosen to give pride of place in marriage to the mutual help of spouses; even to the exclusion of the procreation of children.

For the Church to continue stressing the primary ends of marriage as precisely this – the procreation and education of children – this would create what the ecumenists would certainly have considered a so-called “obstacle” to Christian unity.

And so, they desired to see the teaching de-emphasized.

Pope Pius XI would have disagreed with this strategy.

In his magnificent 1928 encyclical on the ecumenical movement, Mortalium Animos, he wrote:

In other words, the path to Christian unity (which, incidentally, isn’t just a lofty goal, but rather a present reality within, and a permanent mark of, the Holy Catholic Church alone) isn’t paved with compromises, but rather with conversions. This is another conference for another day…

For our purposes, it’s enough to recognize that misguided ecumenical fervor played a part in the downplaying of the primary ends of marriage from the time of Council to the present day.

And what did we get as a result?

The 1983 Code of Canon Law (for the Latin Church), the one that replaced the text from which Pope Pius XI quoted, reads:

The marriage covenant, by which a man and a woman establish themselves a partnership of their whole life, and which of its own very nature is ordered to the well-being of the spouses and the procreation and upbringing of children, has, between the baptized, been raised by Christ the Lord to the dignity of a sacrament.

Notice that this text is stripped of all reference to a hierarchy of the ends of marriage.

It lumps the partnership of man and woman, spousal well-being, and the procreation of children into one group, but worse still, it mentions them in that order, giving one the impression that the ends of marriage as previously understood and taught by the Church have been reversed.

They haven’t. They can’t be. Why not? Because we are talking about Divine Law!

And we wonder why so many Catholics contracept, or have what is sometimes called “a contraceptive mentality,” which can include the abuse of temporary continence in order to avoid pregnancy apart from a grave reason…

So, how might all of this lead one to subtly and unknowingly undermine the true meaning of marriage?

Consider, if you will, those Catholic parents who counsel their children upon marriage to take time out to save a little money, to do some traveling, to buy a nice house, and only then to consider having children.

This happens frequently, and not necessarily because these people are not committed Catholics or in any way insincere, but more often than not because no one has ever bothered to pass on to them the immutable Faith concerning the primary ends of marriage, in plain language, as Pope Pius XI and those who came before him did.

This is great example of the deadliest kind of attack on marriage and family such as we are experiencing it in our day; an attack resulting from confusing, ambiguous or misleading propositions put forth by our churchmen, sometimes even in official texts, that ultimately serve to obscure sure Catholic doctrine and render a service to the Enemy who prowls about the world seeking the ruin of souls.

God help our churchmen, and God help us!