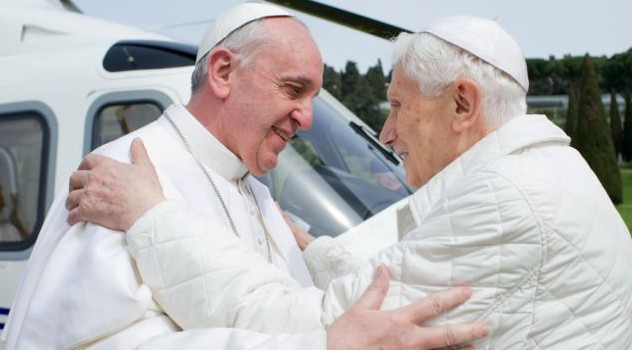 More than a few eyebrows were raised last week when, in response to Francis’ statement alleging that the “great majority” of Catholic marriages are invalid, Fox News journalist Adam Shaw wrote:

Shaw, who is a “politics reporter” for Fox, did an admirable job of bringing the matter into focus under a Catholic lens, writing:

The rule of thumb when the validity of sacraments, whether it be marriage, the Eucharist or the priesthood, is concerned, is to assume validity unless something clearly contradicts that. So just like a priest doubting his faith as he is ordained is still a priest, a bride with jitters is still validly married — God makes up for our frailties.

Garnering the most attention, however, was Shaw’s characterization of the (alleged) pontificate of Francis as one “marred by controversy from the beginning.”

“His papacy has been a litany of confusing statements for the faithful on the most sensitive and delicate topics,” Shaw wrote.

So much so, he said, “many well-meaning Catholics feel they no longer know where the Church stands on issues of faith.”

Indeed, this may be true for some.

I, however, tend to believe that the real problem with Francis isn’t so much that he causes confusion, but rather that he so often justifies the errors of those who know and yet reject what the Church teaches.

Be that as it may, the big takeaway from Shaw’s article for some Catholic commentators was that even Fox News now realizes that Francis has been an unmitigated disaster for the Church; something neo-conservative Catholic outlets can’t bring themselves to admit.

Of far more interest to me, however, is the degree to which this article testifies to the tremendous damage that has been done by Francis’ (alleged) predecessor, Benedict XVI.

I don’t know Adam Shaw, but all indications are that this is a young man who knows quite a bit about his Catholic faith. His writing suggests that he has a certain passion for the Church’s mission and a sincere concern for her stature in the eyes of the world.

As a result of this article, Shaw was relieved of his freelance position providing movie and gaming reviews for Catholic News Service; a decision presumably made by its homo-sympathizing former Director, Tony Spence.

In other words, it seems that on any number of levels Adam Shaw gets “Catholic,” and he is willing to pay a price to defend it.

As such, the conclusion to his latest article on Francis is noteworthy:

Once upon a time Catholics would have been stuck with a bad pope, but since Pope Emeritus Benedict opened the door for a pope resigning when he can no longer do his job, it is time for the faithful to look at Francis and ask — “is this man able to lead the Holy Catholic Church?”

At this point it is clear, Bergoglio has repeatedly proven himself unable to lead, and is doing incalculable damage to the Church that will take decades to heal.

Pope Francis should resign, and Catholics should demand it, so the Church can begin recovering from the havoc his ill-advised and arrogant papacy has wrought.

The first reaction one might have upon reading this is to shout out a “Hell yes!”

Remove the emotion from it, however, and one cannot help but lament the terribly negative impact Benedict’s attempt at “expanding” the Petrine ministry has had on the image of the papacy itself.

In his infamous presentation of 20 May 2016, Archbishop Georg Gänswein indicated that he, and presumably Benedict, are acutely aware of that impact, and yet he provided little in the way of evidence that either one of them is the least bit troubled by it:

To date, in fact, there has never been a step like that taken by Benedict XVI. So it is not surprising that it has been seen by some as revolutionary, or to the contrary as entirely consistent with the Gospel; while still others see the papacy in this way secularized as never before, and thus more collegial and functional or even simply more human and less sacred. And still others are of the opinion that Benedict XVI, with this step, has almost — speaking in theological and historical-critical terms — demythologized the papacy.

Is it accurate to say that the image of the papacy been secularized as never before? Has it truly been made to look less sacred? Has it really been demythologized; brought down to earth and somehow made more credible in the minds of worldly modern thinkers?

If Adam Shaw’s comments are indicative of the way in which other reasonably well-formed Catholics now view the Office of Peter, the answer is clear:

The pope now appears to be little more than the CEO of a multinational corporation, beholden in some way to the demands of its shareholders; the same who will rightly call for his ouster should his job performance negatively impact the Catholic brand.

Yes, as Shaw said, Francis is most certainly doing incalculable damage to the Church that will take decades to repair, but let us not forget that the blasphemous Argentinian heretic in white would still be riding transit buses in Buenos Aires if not for the devastating blow that Benedict XVI delivered to the Church on 11 February 2013.

So, which man will history judge more harshly, Francis or Benedict?

Modernists like Francis have been around for a very long time. They’re a dime a dozen. For my money, therefore, it is the latter – the same who printed Bergoglio’s one-way ticket to Rome – who is most culpable.

In any case, the longer Benedict’s unprecedented assault on the Petrine Office goes unaddressed – and there is no indication that any among the bishops are willing to touch the matter – the more likely it is that the damage that he has wrought will take centuries to repair, if ever.

The Transhumanist Threat: Real or imagined?