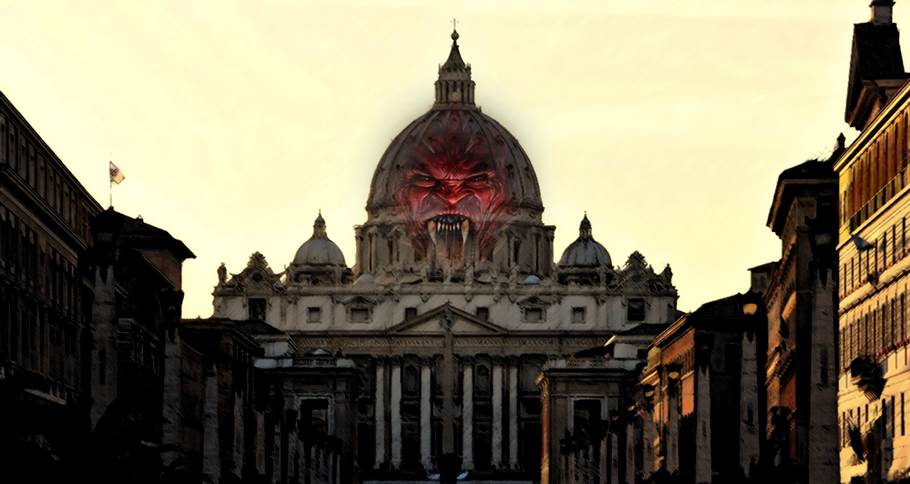 I ended yesterday’s post with what is arguably the most important question facing both the Church and the world today:

Who exactly is Jorge Mario Bergoglio?

The answer to this question is neither pretty nor difficult to ascertain; all it takes is simple observation and a modicum of Catholic sense.

Even so, in His unfathomable mercy, Our Lord sent the Blessed Virgin Mary to Fatima to forewarn us; so that even the dim of wit might be able to discern the signs of the times accurately and thus conduct themselves accordingly.

Recently, I made mention of Cardinal Ratzinger’s claim (made prior to his complicity in the dubious publication of the Third Secret “in its entirety” by the Vatican in the year 2000) that the message of Fatima is “essentially the same” as that given by Our Lady at Akita, Japan.

Since then, several readers have voiced their concerns over the authenticity of the Akita apparitions.

Now, it may very well be that Akita deserves closer scrutiny. Its authenticity, however, is not especially relevant concerning the as yet unpublished portion of the Third Secret.

Please allow me to explain…

What truly matters is that the Fatima apparitions are authentic, and Cardinal Ratzinger, after having read the Third Secret, confirmed that its contents are congruous with the warning recorded by Sr. Agnes Sasagawa at Akita as follows:

The work of the devil will infiltrate even into the Church in such a way that one will see cardinals opposing cardinals, bishops against other bishops. The priests who venerate me will be scorned and opposed by their confreres, churches and altars will be sacked. The Church will be full of those who accept compromises and the devil will press many priests and consecrated souls to leave the service of the Lord. The demon will be especially implacable against souls consecrated to God. The thought of the loss of so many souls is the cause of my sadness. If sins increase in number and gravity, there will be no longer any pardon for them.

As I told you, if people do not repent and better themselves, the Father will inflict a terrible punishment on all humanity. It will be a punishment greater than the Flood, such as one will never have seen before. Fire will fall from the sky and will wipe out a great part of humanity, the good as well as the bad, sparing neither priests nor faithful. The survivors will find themselves so desolate that they will envy the dead.

While the events in Akita took place in 1973, there were published reports as early as 1963 claiming that the Third Secret warned of precisely the same things. Specifically:

Satan will succeed in infiltrating to the top of the Church … Cardinals will oppose Cardinals; Bishops will oppose Bishops … Fire and smoke will fall from Heaven … Millions of people will die by the hour and the survivors will envy the dead.

Though the 1963 report does little to verify the authenticity of Akita, it does provide testimony in support of Cardinal Ratzinger’s claim concerning the message of Fatima.

At this, I would like to return to the question at hand by focusing on specific aspects of Our Lady’s warning; confident that this will lead us to an answer.

Clearly, Our Lady is talking about diabolical influence being made manifest in individual men in Rome, but which ones?

Specifically mentioned are Cardinals and Bishops, but note well that Our Lady then goes on to say:

“The demon will be especially implacable against souls consecrated to God.”

Though it is perhaps too chilling for many to acknowledge, if we put all of this together, it seems that one man on earth in particular fits this warning to a tee:

Jorge Mario Bergoglio; Cardinal, Bishop, and member of the Institute of Consecrated Life known as the Society of Jesus.

And what do the words and deeds of this man tell us about his relationship with the demon?

Over the last three years, Francis has demonstrated a stunning amount of contempt for sacred things – doctrinal, liturgical, and devotional, as well as palpable disgust for those faithful Catholics who cleave to them.

Francis is a man who refuses to bend his knee before the Blessed Sacrament, and yet he has no difficulty doing so before mere men; to say nothing of the seductive serenade of the Humblecam’s shutter.

Though he claims to be the Vicar of Christ, he has an obvious aversion to making the Sign of the Cross – the instrument of Christ’s victory over sin and death. He even insults Christ, the One he supposedly represents, by bowing his head for the blessings of heretics in clerical costume.

He condemns those who but seek converts to the one true Faith – the very mission of the Church – and yet never seems to tire of expressing esteem for the false religions.

Just this week, he joined in a public celebration of the protestant revolt; an event that led, and continues to lead, countless souls into grave error; away from the Most Holy Eucharist; away from the sacrament of confession wherein our sins are forgiven; away from the one true Church of Christ outside of which there is no salvation.

In short, with every passing day, Francis’ hatred of things Catholic (aka the things of God) is becoming more and more difficult to deny.

As such, one is hard pressed to avoid coming to the terrible conclusion that this man, Jorge Mario Bergoglio, aka Francis, is as much or more than any other individual alive today the personification of Our Lady’s warning concerning the work of the Devil being carried out from the top of the Church itself.

This is a bitter pill to swallow, indeed, but the evidence is both overwhelming and irrefutable.

First and foremost, we must pray and fast for the intention of Jorge Bergoglio’s conversion; just as we might for the good of anyone else who so clearly despises the one true Faith established by Christ, but in this case with the good of the Church and the good of innocent souls also well in mind.

We must resist, expose, and condemn his many errors and the innumerable affronts that he heaps upon Our Blessed Lord almost daily; defending the dignity of Christ and the truths of our Holy Catholic faith as best we are able within whatever sphere of influence we happen to have.

As for those who, by the grace of God, occupy a position of authority in the “top of the Church;” these men have a much graver responsibility to resist, expose, and condemn Francis’ many errors – loudly, clearly and publicly; theirs being the solemn duty to protect the flock from the obvious danger that this man poses to souls.

Truly, my friends, it is no exaggeration to say that Jorge Bergoglio is without question the most dangerous man on the planet; bar no one.

If he isn’t converted, deposed, or mercifully taken from this world, and soon, there can be no doubt whatsoever that countless souls will suffer the tragic effects of his nefarious activities for generations to come.

This being so, we must pray and fast for those in the sacred hierarchy; that they may have the courage, by grace, to speak out before its too late and they are held to account for the offenses of Francis as if they were their very own.

Finally, let’s be clear, none of this is to judge the interior disposition of Francis’ soul or that of anyone else – Our Lord alone can do that; it is simply to acknowledge a painful reality:

Jorge Mario Bergoglio is a churchman under the influence of the demonic who, whether knowingly or not, does the Evil One’s bidding with remarkable aplomb.

St. Michael the Archangel, protect us!

Immaculate Mary, pray for us!

Most Sacred Heart of Jesus, have mercy on us!

Was the “Smoke of Satan” sermon aimed at Abp. Lefebvre?