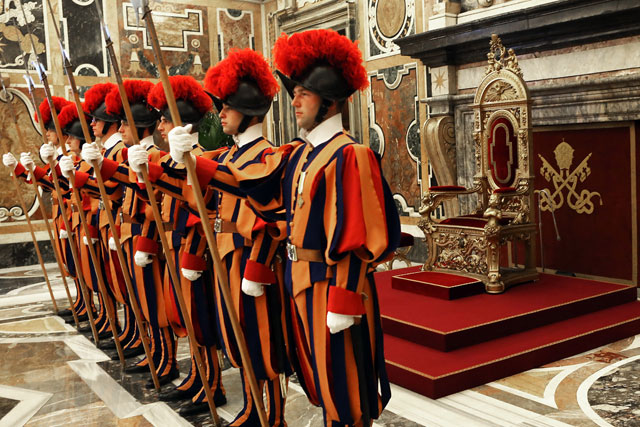 So claims the Joint Statement on the occasion of the Joint Catholic-Lutheran Commemoration of the Reformation that Francis recently attended in Lund.

Don’t let the “joint” nature of the statement, or the event, in any way distract you from what is most important here; namely, that which is being said and done by Francis in the name of the Church.

In other words, let’s remain clear about the gravity of this text inasmuch as it proposes to express the Catholic view of the so-called “Reformation” according to the apparent visible head of the Church.

Sure, readers of this space who rightly abhor the Protestant revolt know better, but even so, we are moved us to ask:

Never mind who’s going to win the upcoming U.S. Presidential election or the World Series – this, my friends, is perhaps the second most important question of our time.

In seeking an answer, we’ll begin by considering for whom Francis does not speak.

At this, let’s take a brief look at portions of the so-called “Homily of His Holiness Pope Francis” as given at the Lutheran Cathedral in Lund on October 31st as published by the Holy See.

Clearly, the only members of “different ecclesial communities” that truly refused “to be resigned to division” are former members of such communities; having since renounced their errors in favor of embracing all that the Holy Catholic Church professes and believes.

This calls to my mind the wonderful presentation given a few weeks ago at the Angelus Press Conference by a noteworthy convert to Catholicism, Fr. Jonathan Loop, FSSPX.

Does Francis speak for men such as these?

Who, then, does he count among his “brothers and sisters”?

We know how Our Lord reckoned such things:

“And stretching forth his hand towards his disciples, he said: Behold my mother and my brethren. For whosoever shall do the will of my Father, that is in heaven, he is my brother, and sister, and mother.”  (Mt 12:49-50)

Does Francis speak for these, as if persisting in a “different ecclesial community” (otherwise known as a heretical community) is the will of the Father?

Again, the answer is obvious.

Our division [between Lutheran heretics and Catholics] was perpetuated historically by the powerful of this world rather than the faithful people, which always and everywhere needs to be guided surely and lovingly by its Good Shepherd.

Who are these “powerful of this world” that stand guilty in Francis’ eyes?

One may reasonably supposes that among those being blamed for perpetuating the “division” are men like Pope Leo XIII who unequivocally rejected Lutheran claims to Apostolic succession in Apostolicae Curae, and Pope Pius XI who made it perfectly clear that the only pathway to unity for the heretics is to return to the one true Church of Christ in Mortalium Animos.

In other words, surely Francis speaks not for the venerable popes of tradition.

With gratitude we acknowledge that the Reformation helped give greater centrality to sacred Scripture in the Church’s life.

Surely Francis is aware that Martin Luther unceremoniously stripped the Bible of seven sacred books and portions of two others. So much for “greater centrality.”

The Council of Trent, for its part, spoke rather harshly of those who would do such things:

“But if any one receive not, as sacred and canonical, the said books entire with all their parts, as they have been used to be read in the Catholic Church, and as they are contained in the old Latin vulgate edition; and knowingly and deliberately contemn the traditions aforesaid; let him be anathema.” (Council of Trent, Session IV)

Clearly, Francis speaks not for those who likewise revere the sacred and canonical books. On the contrary, he finds it expedient to laud the very person that the Fathers of Trent had in mind when they proclaimed, “let him be anathema,” saying:

The spiritual experience of Martin Luther challenges us to remember that apart from God we can do nothing … With the concept “by grace alone”, he reminds us that God always takes the initiative, prior to any human response, even as he seeks to awaken that response. The doctrine of justification thus expresses the essence of human existence before God.

So, what exactly is this “concept” of Luther that Francis finds so very laudable?

He who does not receive salvation purely through grace, independently of all good works, certainly will never secure it … Truly, then, we are saved by grace alone, without works or other merit … Believers certainly are just and holy without works. Works contribute nothing to justification.  It is effected by pure grace richly poured out upon us. (Sermons of Martin Luther: The House Postils – Volume 3, Eugene F. A. Klug, Editor)

Once again, the Council of Trent finds cause, not to honor Luther in the manner of Francis, but to anathematize him for the heretic that he was:

CANON IX – If any one saith, that by faith alone the impious is justified; in such wise as to mean, that nothing else is required to co-operate in order to the obtaining the grace of Justification, and that it is not in any way necessary, that he be prepared and disposed by the movement of his own will; let him be anathema. (Council of Trent, Session VI)

CANON XXIV – If any one saith, that the justice received is not preserved and also increased before God through good works; but that the said works are merely the fruits and signs of Justification obtained, but not a cause of the increase thereof; let him be anathema. (ibid.)

CANON XXXI – If any one saith, that the justified sins when he performs good works with a view to an eternal recompense; let him be anathema. (ibid.)

CANON XXXII – If any one saith, that the good works of one that is justified are in such manner the gifts of God, as that they are not also the good merits of him that is justified; or, that the said justified, by the good works which he performs through the grace of God and the merit of Jesus Christ, whose living member he is, does not truly merit increase of grace, eternal life, and the attainment of that eternal life – if so be, however – that he depart in grace,-and also an increase of glory; let him be anathema. (ibid.)

Obviously, therefore, Francis does not speak for the venerable Fathers of Trent.

So, then, back to what I consider to be the second most important question of our time:

Perhaps little serves to answer that question as clearly as the following taken from the so-called Joint Statement on the occasion of the Joint Catholic-Lutheran Commemoration of the Reformation:

“We have learned that what unites us is greater than what divides us.”

So, what exactly is it that “unites us” with the Lutheran heretics according to Francis?

The Statement tells us:

Standing together in service, upholding human dignity and rights, especially for the poor, working for justice, and rejecting all forms of violence … welcoming the stranger … defending the rights of refugees and those who seek asylum … care for creation.

What exactly divides us? Well, many things, but to name just a few:

The Holy Sacrifice of the Mass. The Most Holy Eucharist. The Blessed Virgin Mary.

At this, the answer to our question is rather clear, is it not?

Francis speaks for those who consider earthbound, man-centered, good deeds greater than the propitiatory Sacrifice of Christ on the Cross made present in the Mass, His Most Precious Body and Blood in the Blessed Sacrament of the Altar, and the memory of the glorious ever Virgin Mary, Mother of Our Lord.

In other words, my friends, with every passing day it is becoming ever more obvious that Francis speaks not for Jesus Christ.

But isn’t that precisely what it means to be the Vicar of Christ?

In closing, I will leave you with the single most important question of our time:

Who exactly is Jorge Mario Bergoglio, or asked another way, where o’ where is Christ’s Vicar on earth?