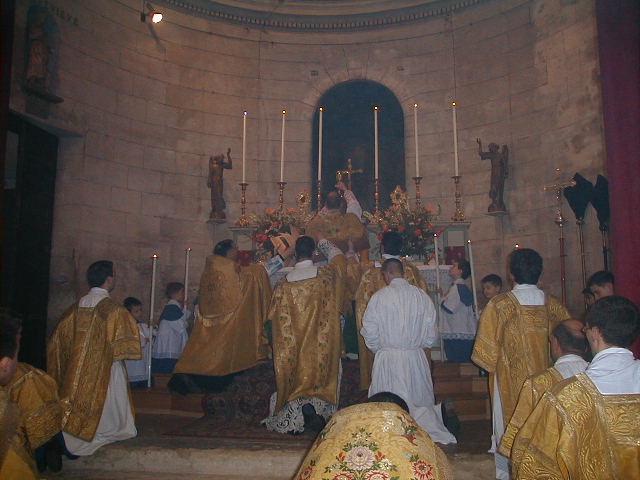 On his excellent blog, Traditional Catholic Priest, Fr. Peter Carota recently posted an entry, “Latin Mass and Novus Ordo Mass Consecration Formula,” in which he offers a comparison of the relevant texts.

After highlighting a number of apparently superfluous changes that were made in producing the new text, he then asks readers to ponder the question, “Why was this needed after hundreds and hundreds of years?”

The answer to Father’s deliberately loaded question can be summed up in one word, ecumenism; in other words, the changes were not truly needed at all.

Though the Second Vatican Council, properly speaking, did not produce the new missal, the reformers who did so approached their work with a mindset similar to that of the Council’s most influential voices.

If one takes the time to explore the driving force behind the conciliar debates in the words of the very men most responsible for crafting the Council documents (for which purpose I highly recommend the book by Professor Roberto de Mattei, The Second Vatican Council: An unwritten story), the one theme that emerges more than any other is the desire to make nearly every phrase as palatable as possible to the protestants.

In the case of the Constitution on the Sacred Liturgy, the Council was rather plainspoken about its ecumenical aim as it relates to the process of liturgical reform:

So, how did fiddling with the Canon of the Mass serve this particular end?

Before we take a closer look at specific text, it is necessary to recognize that one of the primary points of liturgical discomfort for the protestant stems from a rejection of the sacramental priesthood as understood by the Church, and likewise, the sacrificial nature of Holy Mass.

This is what led to the wholesale removal of the Offertory from the new rite, a topic treated in some detail here.

Furthermore, we must realize that the protestant worship service is truly nothing more than a gathering of laity. As such, any liturgical actions undertaken therein are ultimately communitarian in nature, with the “minister” being just another layman who acts as presider.

To put this in perspective, consider just how pointless it would be for a protestant minister to deliver a sermon, or for a mega-church house band to rock some religious tunes, in an empty auditorium. Other than sharpening their performance skills for a later date, it would be of no use to the community.

By contrast, the Holy Sacrifice of the Mass is beneficial for the Body of Christ whether the community gathers or not since the offering is nothing less than the one Sacrifice of Christ offered through the priest who acts in persona Christi.

An excerpt from a 1984 document of German Bishops’ Conference underscores this point:

The main difference between the pre-Conciliar and the renewed Order of Mass is perhaps made clear in the most simple way by the first words that begin each Order. The Tridentine Order of Mass begins with the words, “Sacerdos paratus,” i.e., “The priest being vested.” The renewed Order of Mass begins with the words, “Populo congregato,” i.e., “When the people have gathered.” From this it is clear that the weight of the old rite of Mass lay exclusively in the action of the celebrant; the renewed Order of Mass puts the common action of the People of God at the forefront, within which the celebrant fulfils an essential function which cannot be infringed upon. From this internal difference proceeds most of the external differences in the two Orders.

This shift in weight is well reflected in the simple fact that where the words of consecration are spoken inaudibly by the priest in the traditional rite, as he stands at the head of the assembly facing the Lord along with the people as if to lead them, in the Novus Ordo, the new words are spoken aloud by a priest who is typically facing the people as if to serve the community.

Now, let’s take a closer look at just some of the text in the Canon of the Mass, starting with the consecration of the Precious Blood, which in the traditional rite reads:

Take, and drink ye all of this; for this is the Chalice of My Blood of the new and eternal testament, the Mystery of Faith; which shall be shed for you and for many unto the remission of sins.

In the Novus Ordo the text is rendered:

Take this, all of you, and drink from it, for this is the Chalice of My Blood of the new and eternal covenant, which will be poured out for you and for many for the forgiveness of sins.

The shift in focus on display here is at once subtle, and yet substantial.

First, notice that the new rite substitutes “covenant” for testament, the latter having a number of meanings.

Among other things, “testament” can mean tangible proof or evidence, a law, and also a covenant between God and humanity.

In the present case, all of these things apply in some sense, but the protestant mind necessarily struggles to recognize the Chalice at Holy Mass as the Lord’s Precious Blood tangibly present. The idea that the prayer refers only to the “covenant,” something that properly speaking cannot be seen but only symbolized, as in the case of a wedding ring perhaps, is a bit easier for the heretics to accept.

Furthermore, one notices that the Precious Blood is no longer said to be “shed,” a word that calls to mind the immolation on Calvary, the same made present at Holy Mass in a bloodless manner; rather, it is “poured out” in the new rite, as one might imagine taking place during a communal meal wherein wine is served by the presider.

Likewise, we see that the purpose being expressed in the consecration is no longer said to be the “remission of sins,” a phrase that reflects the truly propitiatory nature of the Holy Sacrifice on the altar (i.e., it is offered in order to satisfy the debt incurred by man’s sin); rather, it is said to be for the “forgiveness of sins,” a more comfortable idea for the protestant who is convinced that he who is “once saved, is always saved,” and therefore imagines the entire affair to be merely symbolic of the forgiveness he has already received, covering even future sins as well.

Again, we are at this point considering mere subtleties, but for the protestant who is hyper-sensitive to that which communicates the reality of Holy Mass as true Sacrifice, they are substantial.

In his blog post, Fr. Carota highlights the words “Mystery of Faith” in the consecration, pointing out that they are moved to another part of the new rite.

Not only are they moved, the Novus Ordo demands a response on the part of the faithful (e.g., “We proclaim your Death, O’ Lord, and profess your resurrection until you come again”), as if such is necessary in order to in some sense “complete” the thought.

In other words, where the priest alone speaks the words, “Mystery of faith,” as part of the traditional consecration of the Precious Blood, thereby calling to mind the mystery of redemption that is carried out by Christ in the Holy Sacrifice of the Mass, the fabricators of the new rite saw fit to subject the text to a “cut-n-paste” operation in order to afford the community an opportunity to chime in with its response.

The desire to create the false impression that the Mass is “the common action of the People of God,” as the German bishops described it, is no more evident than at that part of the new rite commonly called the “Great Amen.”

In the traditional Mass of the Roman Rite, while (according to the rubrics) “holding the Host in his right hand and the chalice in his left, he makes the Sign of the Cross five times over the chalice,” the priest prays silently while facing the High Altar:

Then, while “Lifting up the chalice a little with the host,” he says, also silently, “all honor and glory.”

This latter gesture is known in the traditional rite as the “minor elevation,” and it is such that the Host and Chalice are not seen by the assembly.

Finally, the priest in the traditional rite returns the Host back to the paten, covers the chalice, genuflects, rises, and prays aloud, “For ever and ever,” to which the response is given, “Amen.”

In the new rite, the “minor elevation” is treated as anything but, as it is often quite grand as the priest prays (and frequently chants) aloud:

Through Him, and with Him, and in Him, O’ God, almighty Father, in the unity of the Holy Spirit, all glory and honor is yours, for ever and ever…

To which the people offer the so-called “Great Amen.”

In the 1972 USCCB document, “Music in Catholic Worship” the bishops encourage the “Amen” to be magnified, saying:

The worshipers assent to the Eucharistic prayer and make it their own in the Great Amen. To be most effective, the Amen may be repeated or augmented. Choirs may harmonize and expand upon the people’s acclamation.

As a result of this artificially inflated “Amen,” one gets the impression that the community plays a crucial role in completing the offering itself; a concept that although false, is far more agreeable to the protestant than anything that might hint at what is actually taking place.

In the traditional Mass, the people’s relationship to the offering is most certainly addressed, but it is made far more explicitly clear, among other places, in that part of the Canon just after the consecration of the Precious Blood when the priest silently prays:

Wherefore, O Lord, we thy servants, as also thy holy people, calling to mind the blessed passion of the same Christ thy Son our Lord, and also his rising up from hell, and his glorious ascension into heaven, do offer unto thy most excellent majesty, of thine own gifts bestowed upon us, a pure victim, a holy victim, a spotless victim, the holy Bread of eternal life, and the Chalice of everlasting salvation.

Yes, the Host and Precious Blood are indeed an offering of the Lord’s entire “holy people,” but it is offered by the priest who alone can offer the perfect Victim in persona Christi.

Properly speaking, it isn’t so much Fr. Joe who offers the Holy Sacrifice of the Mass; it is Christ Himself who makes this perfect offering through the priest. Much less is it a common action of the community; rather, the baptized are privileged to enter into the Holy Sacrifice through, with, and in Christ by the power of the Holy Ghost.

Cited herein are but a handful of the ecumenically motivated changes that were made to the Mass by a committee of so-called “experts” after Vatican II, all with the approval of Pope Paul VI.

More than forty years later, what have we to show for it?

Little more than an impoverished rite wherein Protestants can feel right at home, and several generations of confused Catholics who lack any meaningful sense of the sacred after having been deprived of their rightful liturgical inheritance.

Is the Bergoglian “Mary” Catholic? Come to think of it…