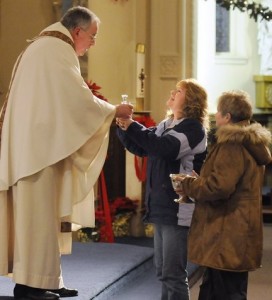 “That utter abomination follows which forces all that precedes in the Mass into its service and is, therefore, called the Offertory.  From here on, almost everything smacks and savors of sacrifice … Let us, therefore, repudiate everything that smacks of sacrifice, together with the entire canon and retain only that which is pure and holy, and so order our mass.” (Martin Luther, Formula Missa, 1523)

So, guess which part of the traditional Mass was duly repudiated after Vatican Council II, with the blessing of Pope Paul VI, in order to create a new rite that is clearly more pleasing to protestants? The Offertory.

In its place, we now have laity carrying up “the gifts” followed by two Jewish “Baruchas,” or blessings: “Blessed are you, Lord our God … for through your goodness we have this [bread / wine] to offer…”

The general thrust of these Barucha prayers has to do with mankind offering something to God, albeit from the gift of His creation. This should make sense given the fact that this is all the Jews could do. As far as the efficaciousness of these offerings unto salvation, they were fruitless inasmuch as they were a purely human endeavor. The primary value inherent in such offerings in the context of Jewish liturgy flowed from the fact that they served as preparation for the one true Sacrifice, the only one that could save us; the same made present at Holy Mass.

Luther was correct, the Offertory does “force” and focus all that follows in the sacred rite in such way as to amplify the Sacrificial nature of the Mass, so much so that it is unmistakeable. He was also correct in asserting that removing the Offertory was the first, and necessary, step toward stripping the Catholic liturgy of its true nature.

Accept, O Holy Father, almighty and eternal God, this spotless host, which I, Thy unworthy servant, offer unto Thee, my living and true God, to atone for my innumerable sins, offenses, and negligences, and for all here present; also for all faithful Christians both living and dead, that it may profit me and them for salvation unto life everlasting. Amen.

O God, Who, in creating human nature, did wonderfully dignify it, and still more wonderfully restored it, grant that by the Mystery of this water and wine, we may be made partakers of His divine nature, Who vouchsafed to be made partaker of our human nature, even Jesus Christ, our Lord, Thy Son: Who with Thee, lives and reigns in the unity of the Holy Spirit, God: world without end. Amen.

We offer Thee, O Lord, the chalice of salvation, beseeching Thy clemency, that it may ascend before Thy divine Majesty, as a sweet fragrance, for our salvation, and for that of the whole world. Amen.

Accept us, O Lord, in our spirit of humility and contrition of heart, and grant that the sacrifice which we offer this day in Thy sight may be pleasing to Thee, O Lord God.

Come, O almighty and eternal God, the Sanctifier, and bless this Sacrifice, prepared for the glory of Thy holy Name.

It has long been noted that the post-conciliar liturgical mindset of the faithful has been marked by a loss of the sense of the sacred, the new order frequently having an anthropocentric (or man centered) orientation.

Given the fact that one of the distinguishing differences between the traditional Mass and the new order has to do with the removal of the Offertory, replacing its rich Sacrificial text with prayers that are oriented toward the human act of offering, can anyone really claim to be confused as to why?