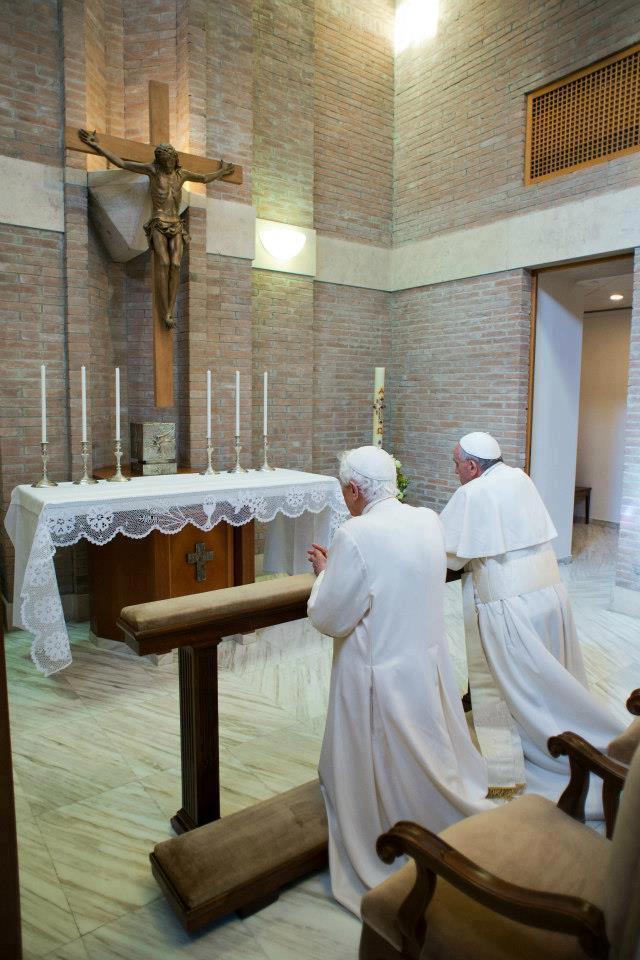 I just received one of Dr. Robert Moynihan’s Letters with this photo of the former Pope Benedict and Pope Francis in the chapel where the former will presumably offer Mass, along with the following text:

“It is not clear from this photo how much room there is between the altar and the wall and whether one can walk around the altar easily, or not … The candles set up on the altar are on the side near the wall, suggesting that Mass at this altar would be celebrated from the side of the altar facing the wall, with the host and chalice raised toward the crucified Christ at the moment of consecration.”

Why all the tiptoeing through the tulips? It seems pretty clear from the photo that if things are kept as they are the former pope will be offering Holy Mass ad orientem in this chapel. Oh, the horror of it all!

How ridiculous. We should be more horrified when Holy Mass is celebrated any other way. Even the Novus Ordo missal assumes that the priest is celebrating in the ad orientem posture.

Presumably more horrifying still would be hinting at the distinct possibility that Benedict may even offer the so-called “Extraordinary Form” in his new chapel!

Moynihan’s delicate approach appears to be a deliberate effort to avoid inviting further comparisons between the two Pontiff’s respective “liturgical styles.” That may be good form for a Vatican correspondent, but let’s be honest; the simple fact that one Papal liturgy can so clearly differ from that of an immediate predecessor is a problem in itself.

Benedict’s return to the Vatican shines a light on the elephant in the sanctuary that no one really wants to talk about:

Pope Benedict’s abdication is no more understandable, much less laudable, than any other scenario in which a father walks out on his family.

To make matters worse, Benedict left behind some very important unfinished business as it relates to what seemed clearly to be one of the priorities of his pontificate; namely, the reform of the sacred liturgy.

By failing to set an example by consistently celebrating Holy Mass ad orientem (something he called a “fundamental expression” of the liturgy’s true nature) much less even one single public celebration of the traditional Mass, Benedict, for whatever reason, simply left it to chance that his successor would carry the torch forward.

Does anyone really expect that Pope Francis will do so?

Where are the true Princes of Holy Church?