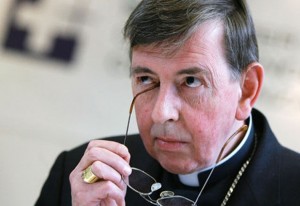 If the most recent Holy Roman Pontiff to have been canonized, Pope St. Pius X, could suddenly be placed in the Holy See of today, like a frog dropped in a pot of boiling water, he would leap into action, the anathemas and condemnations flying from his mighty pen so fast it would make even Cardinal Burke’s head spin.

As it is, the majority of Catholic prelates are doing backstrokes as the souls in their care perish from lack of a shepherd.

According to a report in the Tablet,  Cardinal Koch, President of the Pontifical Council for Promoting Christian Unity and the Commission for Religious Relations with Jews, on a recent visit to Jerusalem, stressed “no conversion for the Jews,” saying:

“We Christians must not bear witness in relation to the Jews to a path of salvation which is completely foreign to them, as we do with other religions. This is because the New Testament is built up totally on the basis of the Old Testament. The Catholic Church therefore does not have an organized Jewish mission, as certain Evangelical groups do.”

In light of Aquinas’ definition of heresy as “a species of infidelity in men who, having professed the faith of Christ, corrupt its dogmas,” this would make Cardinal Koch a material heretic.

In speaking of “a path of salvation which is completely foreign” to the Jews, clearly His Eminence is referring to none other than Jesus Christ, who alone is the Way to everlasting life.

How is it even remotely possible for anyone who holds the Catholic faith, much less a Prince of the Church (a title that means less with every passing day) to refer to Jesus Christ, Son of David and long-awaited Messiah, as “completely foreign” to the Jews? If a candidate for Confirmation said this, the bishop would be duty bound to deny him the sacrament!

And while it is true from the standpoint of formal structure that the Church does not have “an organized Jewish mission,” it is to the everlasting shame of all of her members that this is the case, especially those in the hierarchy who, like Cardinal Koch, place diplomacy and warm sentiments above the mission that Jesus Christ gave to His Church.

Clearly, St. Peter didn’t believe that the Jews were exempt from the divine mandate to “Go forth to all nations, baptizing them in the name of the Father, the Son, and the Holy Ghost.”

In suggesting that the Jews stand in no need of conversion, Cardinal Koch s is guilty of precisely the indifferentism condemned by Pope Pius VII, wherein “truth is confused with error, and the Holy and Immaculate Spouse of Christ is placed on the same level as heretical sects and even as Jewish faithlessness” (Post Tam Diurturnas)

What’s a Catholic to do?

The weak and ignorant among us will simply float about in the currents of the modern day crisis, doing their best to convince themselves and others that the water is just comfortably warm.

The rest of us will take a more sober view, intrepidly pointing to heresy wherever it may lurk, reminding our fellow Catholics that the Church has been praying for the conversion of the Jews for many centuries, and for one simple reason. In the words of the Council of Florence:

The Catholic Church firmly believes, professes, and proclaims that those not living within Her, not only pagans, but also Jews, heretics, and schismatics, cannot become participants in eternal life but will depart ‘into everlasting fire which was prepared for the devil and his angels’ (Mt. 25:41), unless before the end of life the same have been added to the flock… (Council of Florence, Dz 714).

Given the fact that Cardinal Koch no longer believes as much, I would suggest in all charity that we must pray for his conversion, that he might one day return to the Catholic faith.

Let us pray also for Cardinal Koch: that almighty God may remove the veil from his heart; so that he too may acknowledge Jesus Christ our Lord.