“On my honor I will do my best to do my duty to God and my country and to obey the Scout Law; to help other people at all times; to keep myself physically strong, mentally awake, and morally straight.”

So has read the “Boy Scout Oath” since the early 20th century. Based on recent events, however, it’s clearly time for a change.

On May 23, 2013, the Boy Scouts of America’s National Council approved a resolution that would, for the first time in the group’s history, allow membership to boys, ages 10–17, who are openly gay.

“The resolution also reinforces that Scouting is a youth program, and any sexual conduct, whether heterosexual or homosexual, by youth of Scouting age is contrary to the virtues of Scouting,” the organization announced in a public statement.

Evidently, youth who publicly proclaim their sexual attraction toward other boys is conduct that the organization now considers virtuous, and this begs a number of questions:

What’s a greater invitation to trouble on camping trips, gay boys randomly assigned to just any tent, or setting aside a tent where the gay youth can bed down together?

Now that openly gay boys are able to become Scouts, will the “Family Life” merit badge need to be modified?  (To say nothing of “Fly Fishing” and “Backpacking.”)

How much public proclamation of homosexual desire is acceptable, and how much is behavior unbecoming a Scout?

Most importantly, why did the BSA ever consider going down this road in the first place?

Was there a groundswell of gay boys scattered throughout the heartland of America just clamoring to join an organization whose members pledge to uphold their “duty to God” and to remain “morally straight” at all times?  Or is it the Scout Law requiring members to be “reverent toward God and faithful in their religious duties” that homosexual youth find so irresistible?

Of course, it’s neither of these things; rather, the Scouts were “bullied” (to borrow a well-worn buzzword from the left) by adult homosexual activists headquartered in America’s urban centers.

According to Reuters, “Gay rights advocates gathered petitions with more than 1.8 million signatures in support of ending the ban,” which gave them the leverage needed to pressure some of the BSA’s largest corporate sponsors (e.g., Intel and UPS) into threatening to withhold future funding if homosexual boys were denied membership.

“Today’s vote is a significant victory for gay youth across the nation and a clear indication that the Boy Scouts’ ban on gay adult leaders will also inevitably end,” said Rich Ferraro, spokesman for the Gay and Lesbian Alliance Against Defamation (GLADD) following news of the decision.

Well, he’s right about one thing; the ban on adult gay scout leaders will undoubtedly end. The rest of the statement, however, is pure BS (and that doesn’t stand for Boy Scouts).

This is a victory for evil. Period.

There are no “gay youth across the nation” banging down the door to join the Scouts. Adolescent boys who are struggling with same-sex attraction, and the feckless adults who are encouraging them to embrace their disordered desires, are repulsed by the BSA’s formerly wholesome convictions. 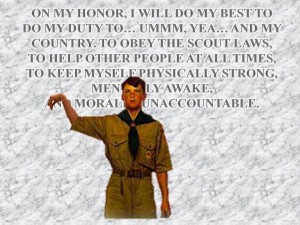 And that has been the point all along.

It was precisely the BSA pledge to “honor God and to live morally straight” that triggered the attack against them. Why? Because that’s what Satan has always done; manipulate weak and sinful men into joining him in the battle against all that is good.

Yes, the time has come for the Scouts to rewrite their century-old Pledge. They might also want to consider renaming the “Jamboree.”