Home
Blog Post
I believe in the U.S. Constitution 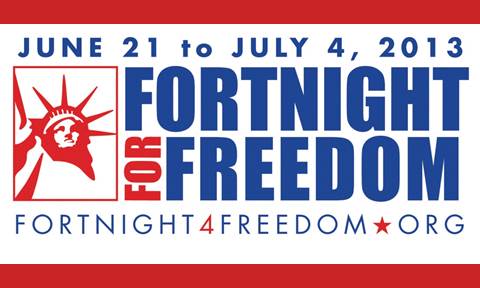 As part of their campaign to defend “religious liberty” (such as it is proposed in the Vatican II document, Dignitatis Humanae) in the face of the immoral prescripts found in the Obama Administration’s HHS mandate, the bishops of the United States, from the earliest days of this battle, have repeatedly claimed recourse to “our first, most cherished freedom,” a reference to the First Amendment in the U.S. Bill of Rights.

Now, some are even going so far as to speak of Catholics as a people “who believe in the Constitution.”

Well, if we are going elevate the U.S. Constitution to an article of faith, perhaps we should compose a “Patriotic Credo” that can be recited during the upcoming Fortnight for Freedom observances; you know, something special to go along with the Patriotic Rosary.

Please don’t let the parody fool you. This is serious business.

The Church is engaged, not just in a battle over healthcare in the United States at the hands of Barack Obama and company, but in a war against the forces of evil all over the world to maintain the ability to carry out the mission given to her by Christ, in the fullness of freedom, which is hers by Divine right.

With all due respect to the U.S. Conference of Catholic Bishops, preaching as if the Constitution of the United States was inscribed by the finger of God on a tablet of stone is not the answer. Neither are such activities as “patriotic sing-a-longs for children, Pancakes for Patriotism, or Fish Fries for Freedom” (taken from the USCCB’s 14 Ways for Parishes to Observe the Fortnight for Freedom).

Soon, I will propose, in all seriousness, an alternative course of action constructed upon the solid foundation of Catholic tradition; one that accounts for the glaring reality that the challenges we now face are truly nothing less than an organized assault against the Kingship of Christ.

The latest stunt from the Bergoglian Circus UPDATED!