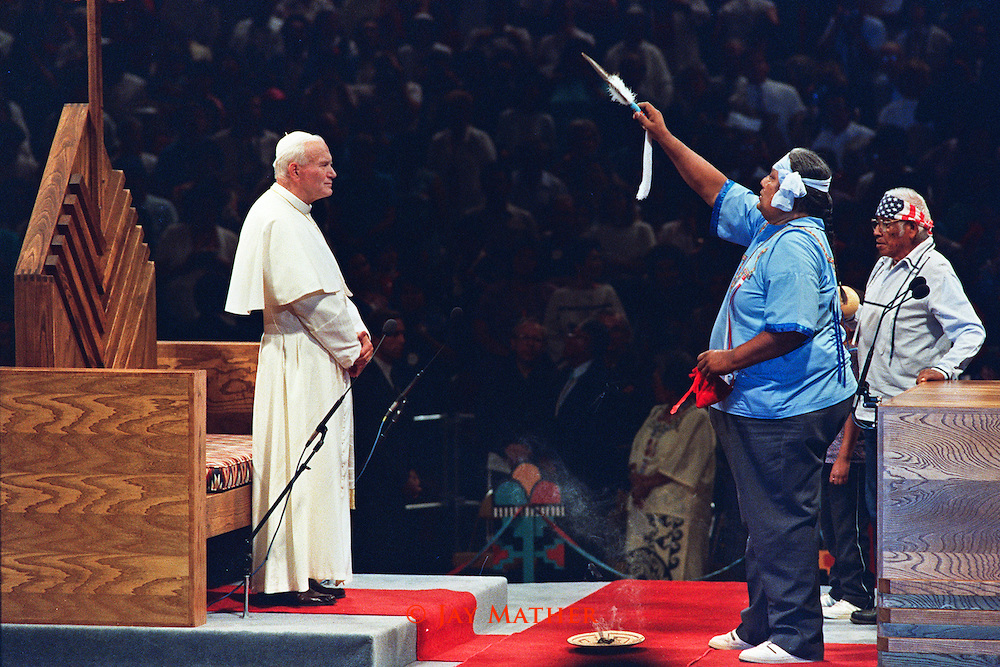 Many will see the title to this post and assume that it’s hyperbole. Others, like perhaps most regular readers of this space, will answer the question aloud in the affirmative even before reading what follows.

After all, it certainly wasn’t the influence of Almighty God that moved Pope John Paul II to orchestrate the Assisi events, to take part in pagan rituals, and to publicly pray for the intercession of St. John the Baptist to “protect Islam.”

Even so, the thing that moves me to pose this question here today is a video (below) that a friend recently shared on Facebook. It shows footage of the Polish pope at a gathering with high school students in New York at Madison Square Garden in 1979.

The pope is formally introduced at roughly the 0:40 mark, after which the raucous cheers of the crowd begin. Pope John Paul II doesn’t respond vocally, however, for more than a minute-and-a-half.

For the sake of expedience, the video will begin playing at the 2:20 mark.

The New York Times, described what you just saw as follows:

After a roaring, singing, brass‐band welcome for Pope John Paul II by almost 19,000 teen‐agers in Madison Square Garden yesterday, it was time for him to respond. The crowd came to a hush and the Pope, seated, leaned toward his microphone …

The Pope’s eyebrows danced and his broad Slavic face beamed. Someone started to coo and everyone could hear the sounds, low‐register tones on the public address system: “Woo, woo, woo.” What was this? It was the Pope…

Those who could stand watching the video to the end will have seen that the pope continued whipping the crowd up into a frenzy for another five-and-a-half minutes with an assortment of senseless sounds – woos, mmmhumms, and ooohs.

At the 5: 40 mark in the video, after more than three minutes of this odd behavior, the pope speaks his first words at the event: “A charismatic moment.”

Yes, indeed, a certain spirit was stirring that day…

Some of you have perhaps seen this video before. Today was the first time for me, and I have to admit that initially I wasn’t entirely certain that it was real. I literally sat dumbfounded.

This is the Vicar of Christ?

While neo-conservatives, the same who, like Karl Keating, will even go so far as to explain away the aforementioned prayer to St. John the Baptist to “protect Islam,” likely consider this a moment of harmless jocularity on the part of a charming pope, it strikes me as nothing less than a sign of the diabolical.

It wasn’t until Cardinal Terrence Cooke approached the pope, apparently reminding him of his schedule, that he began to deliver his address in earnest.

Following is an excerpt taken from that address as found on the website of the Holy See.

With the aid of your Catholic education, you have received the greatest of gifts: the knowledge of Christ.

This statement may initially seem harmless, but it is not.

Oh, give the Holy Father a break. Surely he didn’t mean to be taken so literally!

Before we consider just how literally John Paul II intended his words to be taken, one will note that he immediately went on to cite Philippians 3:8-9 in support of his claim, saying:

Of this gift Saint Paul wrote: “I believe nothing can happen that will outweigh the supreme advantage of knowing Christ Jesus my Lord. For him I have accepted the loss of everything and I look on everything as so much rubbish if only I can have Christ and be given a place in him.”

Following is how the same passage reads in the Douay Rheims translation:

Furthermore, I count all things to be but loss for the excellent knowledge of Jesus Christ, my Lord: for whom I have suffered the loss of all things and count them but as dung, that I may gain Christ. And may be found in him, not having my justice, which is of the law, but that which is of the faith of Christ Jesus, which is of God: justice in faith.

One wonders how John Paul II can justify going from either “the supreme advantage” or “the excellent” to “the greatest of gifts.” That’s quite a leap, is it not?

In any case, that his claim is to be taken literally becomes evident when it is placed in context with Redemptor Hominis, a document wherein John Paul II had articulated the program for his pontificate some seven months earlier.

In this, the inaugural document of his papacy, John Paul II stated:

Man as “willed” by God, as “chosen” by him from eternity and called, destined for grace and glory – this is “each” man, “the most concrete” man, “the most real”; this is man in all the fullness of the mystery in which he has become a sharer in Jesus Christ, the mystery in which each one of the four thousand million human beings living on our planet has become a sharer from the moment he is conceived beneath the heart of his mother. [Emphasis added] (Redemptor Hominis, Article 13)

NB: All men, according to this proposal – not only Christians – are already sharers in the grace and glory willed for him by God.

This man is the way for the Church – a way that, in a sense, is the basis of all the other ways that the Church must walk – because man – every man without any exception whatever – has been redeemed by Christ, and because with man – with each man without any exception whatever – Christ is in a way united, even when man is unaware of it: “Christ, who died and was raised up for all, provides man”-each man and every man- “with the light and the strength to measure up to his supreme calling.” [Emphasis added] (ibid, Article 14)

Insofar as John Paul II was concerned, however, “man is the way for the Church.”

This, my friends, is why John Paul the Great Ecumenist told those poor children that knowledge of Christ  is the greatest of gifts.

You see, in his view, the Church’s primary obligation is simply to inform man of the fact of his union with Christ; a present reality wherein grace and glory are already his. This knowledge, therefore, is the greatest gift that she has to offer.

Is it any wonder that he behaved, over the course of his entire pontificate, as if it mattered not one iota to which religion one belongs; i.e., as if Baptism is of precious little concern?

Consider the solitary mention Baptism received in the more than 20,000 word text of Redemptor Hominis:

In the mystery of the Redemption, that is to say in Jesus Christ’s saving work, the Church not only shares in the Gospel of her Master through fidelity to the word and service of truth, but she also shares, through a submission filled with hope and love, in the power of his redeeming action expressed and enshrined by him in a sacramental form, especially in the Eucharist. The Eucharist is the centre and summit of the whole of sacramental life, through which each Christian receives the saving power of the Redemption, beginning with the mystery of Baptism, in which we are buried into the death of Christ, in order to become sharers in his Resurrection, as the Apostle teaches.  (ibid, Article 20)

At first blush, this may seem inoffensive to Catholic sensibilities.

When read carefully, however, in particular in light of his lengthy pontificate, one comes to realize that for John Paul II (as the emphasized text above attests) the sacraments do nothing more than express the redeeming action that he is at pains to insist already applies to every man without exception.

If ever one was interested in finding clues that might provide an answer to the question posed in the title to this post, the video helps, but Redemptor Hominis  seals the deal.

Our Lord commissioned His Church to Baptize the nations and to teach.

The Devil says, “To Hell with Baptism! Tell them the glory is already theirs.”

Now you tell me, which one influenced Pope John Paul II?

Your assistance in keeping akaCatholic going is both necessary and greatly appreciated.

Francis and the Roman Missal Crisis