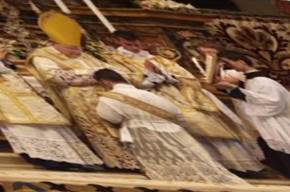 In several previous posts, I proposed that the Christology of Pope Francis, as evidenced in his public discourse, is such that his view of Christ is “diminished and distorted,” and this necessarily means that his view of the priesthood (as well as the papacy itself) is similarly deficient.

In his Apostolic Exhortation, Evangelii Gaudium, for example, Pope Francis suggested that the dignity derived from Holy Orders is no greater than that derived from Baptism; something that even the heretics have received.

The ministerial priesthood is one means employed by Jesus for the service of his people, yet our great dignity derives from baptism, which is accessible to all. The configuration of the priest to Christ the head – namely, as the principal source of grace – does not imply an exaltation which would set him above others. (Evangelii Gaudium – 104)

This treatment of the priesthood by Pope Francis is an insult to Christ, the High Priest and King to whom the ministerial priest is uniquely configured, and from Whom his great dignity is derived.

Not only does that configuration imply an exaltation which would set the priest above others; he is above others!

As if one needs any more evidence of just how far the mind of this pope is from the mind of the Church with respect to the priesthood, consider the following:

Since 1963, the Church has designated the Fourth Sunday after Easter as the “World Day of Prayer for Vocations.”

An archive of the messages issued by the popes specifically for that day is available on the website of the Holy See as follows:

A quick review of each of the messages issued by the various popes over the years will reveal, just as one might expect, a focus on priestly vocations (meaning, the ministerial priesthood), along with some reference to consecrated religious life.

That is, until Pope Francis…

So far, he has issued two messages for World Day of Prayer for Vocations.

His first, in 2014, gives the priesthood just a passing mention, while deliberately lumping it together with the lay vocation:

Therefore every vocation, even within the variety of paths, always requires an exodus from oneself in order to centre one’s life on Christ and on his Gospel. Both in married life and in the forms of religious consecration, as well as in priestly life, we must surmount the ways of thinking and acting that do not conform to the will of God.

The message for World Day of Prayer for Vocations 2015 has already been published.

In it, Pope Francis doesn’t mention the priesthood even once.

Now, don’t get me wrong… None of the post-conciliar popes, including Benedict XVI who was clearly the best of the lot, were models of tradition. Every last one of them said and did things that are scandalous and gravely offensive to Christ and the faithful.

That said, Pope Francis is, as I stated very early on in his pontificate, the Generalissimo of Conciliar Revolution.

Are these World Day of Prayer for Vocations messages what one might call circumstantial evidence?

Sure, but only a fool-by-choice will dismiss it as meaningless, and likely for the simple reason that coming to terms with the reality of a pope who so clearly does not think and feel (much less act) with the mind of the Church is just too painful to acknowledge.

Preliminary thoughts on the Scalfari interview

PHANTOM of a VIRUS: Help us, Lord, so we can get it right!