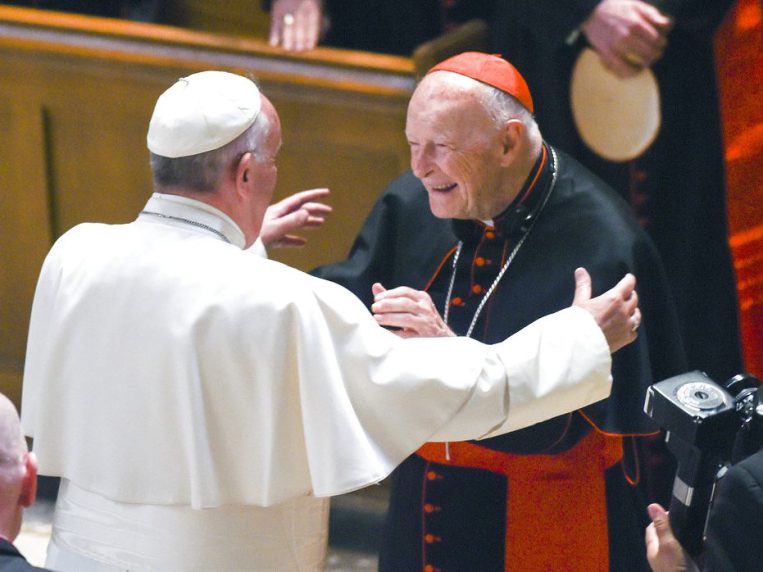 It seems that we are in the midst of an awakening of sorts among some neo-conservatives, as persons once loathe to level public criticism against the Heretic-in-Chief are now beginning to speak of the disaster that is Francis more forcefully than at any time in the past.

The tipping point arrived with the credible allegations made by Archbishop Viganò, who testified that Francis turned a blind eye to the homo-shenanigans of Uncle Ted McCarrick, and even made of him a trusted and influential advisor.

This is all well and good, and yet it is noteworthy that it took Viganò’s bombshell to finally incite anti-Bergoglian outrage on the part of certain neo-con commentators; his numerous blasphemies and heresies, on the other hand, not being quite enough to do the trick.

Over a period of years, Bergoglio has committed a laundry list of grave offenses against Our Lord, Our Lady, and our Holy Catholic Faith; even going so far as to declare in an Apostolic Exhortation (so-called) that God is unjust and actually wills that persons should violate the Sixth Commandment (Amoris Laetitia), but even this wasn’t enough to provoke the indignation of many.

Then Viganò drops his bombshell, and boom – the floodgates of outrage come flying wide open! One wonders, why is that?

The answer is revealed in an article entitled Being Frank about Francis, posted at the neo-conservative website Catholic World Report.

Written by Dr. Douglas Farrow, a Professor of Theology at McGill University in Montreal, the article, which makes a number good points and has been rather well-received in many traditional circles, begins with, and is constructed around, a quote from Fr. Thomas Rosica, who wrote:

Pope Francis breaks Catholic traditions whenever he wants because he is ‘free from disordered attachments.’ Our Church has indeed entered a new phase: with the advent of this first Jesuit pope, it is openly ruled by an individual rather than by the authority of Scripture alone or even its own dictates of tradition plus Scripture.

About this, Dr. Farrow writes,

Well, since we are being frank, let me say that a finer example of a disordered attachment could scarcely be found. Francis does not appear here as the successor of that Peter whose only mandate is to confess Christ and to safeguard the sacraments of the gospel, thus feeding the flock and strengthening his brethren. He appears rather as Jesus himself appeared – as one so vested with the Spirit as to take authority over scripture and tradition. And this, if taken seriously, is heresy of the rankest kind.

At this, a number of red flags appear. First, it must be said that Jesus does not take authority over Scripture and tradition; He pronounces on them authoritatively as He is both the Author and the Subject of each.

As for Peter and his successors, it is not adequate to say that their “only mandate is to confess Christ and to safeguard the sacraments of the gospel.” While the pope is indeed the servant of Scripture and tradition, he governs with sovereign authority over the entire Church; an authority that reaches even beyond her confines as he calls the secular States to account for “everything whatsoever that Jesus commanded.”

What is evident already, and will become even clearer as we proceed, is that Farrow has embraced a typically neo-conservative (that is, erroneous) concept of both Our Lord and the papacy.

Farrow points to “Fr. Rosica’s fawning ‘clericalism of one,’ if I may put it that way,” saying that it “confuses Peter with Christ.” And while he alludes to the Viganò bombshell, ultimately he concludes:

The McCarrick scandal, let us all admit, is just one powerful gust in the swirling tempest that now surrounds Francis and threatens to capsize both his pontificate and the barque of Peter itself.

The real problem, as Farrow sees it, is what he called “the error of papal personalism.” He writes:

Francis has deflected attention from proper papal authority in order to enhance or protect his personal authority – the very authority so aptly described by Fr. Rosica …

What, then, is the solution? To resist clericalism? Yes, and especially this “clericalism of one” that places the pope beyond all criticism and beyond all accountability.That will not be enough, but it will be a start. For the pope may be subject to no earthly authority the equal of his own, but he remains subject to the authority of Christ, of which he is by no means the only repository, nor in most matters the sole interpreter.

Fair enough, but then his argument comes apart as he continues:

The point is rather that it is wrong to treat Francis – or any pope – as if, like Saul, he were indeed a sovereign, an absolute sovereign against whom no hand must ever be lifted save, at most, to trim some small piece from the hem of his garment, lest one be found guilty of sinning against the Lord’s anointed.

Zeroing in on his main point, Farrow quotes Canon 331 of the 1983 Code of Canon Law, which reads:

The bishop of the Roman Church, in whom continues the office given by the Lord uniquely to Peter, the first of the Apostles, and to be transmitted to his successors, is the head of the college of bishops, the Vicar of Christ, and the pastor of the universal Church on earth. By virtue of his office he possesses supreme, full, immediate, and universal ordinary power in the Church, which he is always able to exercise freely.

Farrow then admits, “That certainly sounds like sovereignty…” Yes, it does, and it is well that it should! Just as Our Lord Jesus Christ is most assuredly King, so too is the pope a sovereign. Those two truths go together in such a way that if one were to lose sight of the former, the latter will necessarily be overlooked as well.

Dr. Farrow illustrates this for us impeccably as he continues:

…but what kind of sovereignty? Not the personalistic kind that Rosica favors, nor even the political kind that the people of Israel favored when they demanded that a king be appointed over them, nor yet the military kind favored by Ignatius.

Note well here that the bishop of Rome is the vicar of Christ, not the vicar of God. God has now but one vicar, the God-man himself, who is the Church’s true head and its only proper sovereign and high priest. Peter exercises something of the sovereignty vested by God in Christ, for Christ has in turn vested that something in him and his successors, together with the apostolic college, in the form of magisterial judgment and binding juridical authority in the daily life of the Church.

Duly noted. Dr. Douglas Farrow is – like apparently pretty much every other neo-con professor of theology who enjoys “full communion” in the conciliar church – woefully ignorant about the Kingship of Our Lord Jesus Christ.

Sorry, but drawing a distinction between Christ and God smacks of heresy. That said, we do not address the pope as “vicar of God” for good reason; it concerns the nature of the Kingship of Christ as well as the sovereign power of His vicar.

You see, Jesus Christ is King, not simply because He is true God who has always had sovereign authority over all of creation; rather, He is King “as man in the strict and proper sense” (cf QuasPrimas). We will return this point momentarily.

Peter exercises something of the sovereignty vested by God in Christ, for Christ has in turn vested that something in him and his successors…

That “something” in the case of Christ is “all authority in Heaven and on Earth,” and it wasn’t so much “vested” in Him – as if Our Lord has been granted the authority to rule in the name of the true Sovereign, God – rather, “all authority has been given” to Him “as man” (ibid.); i.e., it is properly His to exercise in His own name – Jesus Christ.

As far as His vicar, the pope, is concerned: He is the visible head of the Church on earth, who is indeed himself a sovereign inasmuch as he rules in the name of, and with the authority of, Christ who is both Head of His Mystical Body and King.

As is stated in Pastor Aeternus of the First Vatican Council:

Hence we teach and declare that by the appointment of Our Lord the Roman Church possesses a sovereignty of ordinary power over all other Churches, and that this power of jurisdiction of the Roman pontiff… (cf Pastor Aeternus, Ch. 3, no. 2)

Some English translations read “…a pre-eminence of ordinary power…,” however, the Latin potestatis principatum is frequently rendered as sovereignty of power as above, and more importantly, the power of the Roman Pontiff has traditionally been understood as such. This much was signified by the papal triregnum – the papal tiara – at least until such time as Paul VI made a show of relinquishing it.

As unfortunate as that gesture was, it was an accurate reflection of the Second Vatican Council’s veritable annulment of the Social Kingship of Christ given that the papal tiara signified, in part, the temporal power of Christ and thus His vicar; that is, his authority to insist upon the Sovereign Rights of Jesus Christ, the King of kings, in the face of all other earthly power.

As previously noted: The Kingship of Christ is intimately related to the true nature of the papacy. Given that Pope Paul the Pathetic did not possess the Faith necessary to proclaim the former, why would anyone expect him to positively portray the latter?

In any case, the sovereign power of the pope is, of course, not unlimited. On this note, Dr. Farrow is correct. As the Vatican Council states:

For the Holy Spirit was promised to the successors of Peter not so that they might, by his revelation, make known some new doctrine, but that, by his assistance, they might religiously guard and faithfully expound the revelation or deposit of faith transmitted by the apostles. (ibid., Ch. 3, no. 6)

Be that as it may, given Farrow’s convoluted understanding of the Kingship of Christ, it is no surprise that he does not truly understand the nature of the papacy. This he made plain as he went on to effectively reduce the pope to a glorified administrator:

But Peter is not himself a sovereign, properly speaking; he is merely a steward, with very specific responsibilities. It was and is a mistake, whether by titles or by customs or by laws or by scruples – here we may indeed challenge some of the old charts, which were rightly corrected at the Second Vatican Council – to regard him as if he were something other or more than that.

So there you have it – it’s all about allegiance to the Almighty Council – the manifesto of the counterfeit church! This is the reason why so many neo-conservative commentators were not moved to indignation by Bergoglio’s assault on authentic Catholic doctrine, nor his numerous offenses against Our Lord and Our Lady.

You see, the neo-cons, whether they are fully conscious of it or not, belong to the church-of-man. As such, when the popes and the bishops violate the sacred duties entrusted to them by Christ, the best they can muster is a bit of handwringing over alleged ambiguities, or some disproportionately mild form of criticism of the “Holy Father’s” words and deeds no matter how odious they may be.

But violate the faithful’s trust, their dignity, and their rights, and look out!

That, apparently, is the only unforgiveable crime in the twisted world of Newchurch.