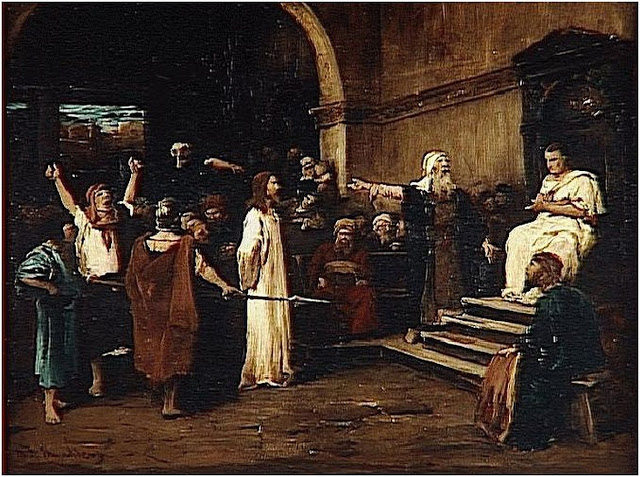 Have you ever wondered why the Nicene Creed contains a very specific reference to Pontius Pilate? It is a rather curious thing when one considers that the only others named therein, in addition to the Persons of the Blessed Trinity, are Jesus Christ and the Blessed Virgin Mary.

By way of background, the 1917 Catholic Encyclopedia states:

Soon after the Council of Nicaea new formulas of faith were composed, most of them variations of the Nicene Symbol, to meet new phases of Arianism. There were at least four before the Council of Sardica in 341, and in that council a new form was presented and inserted in the Acts, though not accepted by the council. The Nicene Symbol, however, continued to be the only one in use among the defenders of the Faith. Gradually it came to be recognized as the proper profession of faith for candidates for baptism.

Arguably, the succinct profession of faith that is the Nicene Creed would have sufficed to confront the heresy of Arianism just as well without any mention of Pilate, and yet, the Holy Ghost inspired the Church to mention him by name.

I cannot say for certain why that’s the case, but given that Pontius Pilate and his reign as a Roman Governor of Judea are undisputed matters of the secular historical record, perhaps the reason is to preemptively address fallen man’s temptation to relegate religious beliefs to mere pious fables and fairytales. In other words, the mention of Pilate in the Creed serves to underscore the historicity of the Catholic faith.

During his “Urbi et Orbi” address yesterday, Jorge Bergoglio (stage name, Francis) seemed to do well in making a similar point. He said:

The Easter message does not offer us a mirage or reveal a magic formula … “Jesus who was crucified has risen”. It speaks to us not about angels or ghosts, but about a man, a man of flesh and bone, with a face and a name: Jesus. The Gospel testifies that this Jesus, crucified under Pontius Pilate for claiming he was the Christ, the Son of God, rose on the third day in accordance with the Scriptures, just as he had foretold to his disciples.

As with many other Bergoglian operations, he proposed to offer one thing, but ultimately delivered the exact opposite, perhaps the best example of which is his “defense of marriage and family” known as Amoris Laetitia.

In the present case, rather than defending the reality of the Holy Catholic faith, he actually did violence to the historical record concerning Our Lord’s passion, and he did so by employing one of his favorite means of deception – the twisting of Sacred Scripture.

The Gospel testifies that this Jesus, crucified under Pontius Pilate for claiming he was the Christ, the Son of God, rose on the third day in accordance with the Scriptures, just as he had foretold to his disciples.

Does Sacred Scripture really aver that Pontius Pilate put Jesus to death because he claimed to be the Christ?

The short answer: No. A better answer: Hell no.

Though it is hardly necessary for regular readers of this space, please allow me to present a brief synopsis of the historical truth to which the Gospel actually testifies.

On Holy Thursday, Judas, along with “a great multitude with swords and clubs,” sought out and apprehended Jesus in the Garden of Gethsemane.

On whose orders were they so acting? Was it by Pilate’s authority?

No, they were sent for this very purpose by the Sanhedrin and the Chief Priests. Lest there be any doubt whatsoever as to who these armed assailants were, Jesus addressed the mob directly, saying, “I sat daily with you, teaching in the temple.”

No, they immediately took Him to the men who ordered Our Lord’s abduction, Caiphas, the High Priest, and the “ancients of the people.”

What people? The Romans?

The Gospel testifies that Caiphas, the chief priests, the Sanhedrin and the bloodthirsty mob sought to put Jesus to death, for which purpose they delivered Him to Pilate, the Roman Governor and pagan, who could not have been less concerned with anyone who may claim to be the Christ. That was a Jewish matter, and none of his affair.

So, what did the murderous multitude and their leaders do? They lied, telling Pilate that Jesus had forbidden His followers to pay taxes when, in fact, He had instructed them to “render unto Caesar.”

Pilate was not moved, and after having examined Our Lord himself declared Jesus innocent, saying, “I find no cause in this man.”

The crowd, stirred to anger all the more by these very same leaders, pressed for Our Lord’s death just the same. Pilate, however, continued to oppose them, “desiring to release Jesus.”

Unwilling to bend in the stiffness of their necks, Caiphas, the chief priests, the Sanhedrin and the bloodthirsty mob demanded that Jesus be crucified, scoffing at His innocence and boldly declaring, “His blood be upon us and upon our children!”

Finally, Pilate relented and consented to their diabolical demands.

As suggested, not even one small detail provided in this synopsis is news to any of the regular readers of this space; in fact, they are well known to Jorge Bergoglio also.

And yet, on Easter Sunday, the holiest day of the year, he stood before the entire world, figuratively placed his hand on the Bible and lied with a subtlety worthy of the Evil One whose bidding he does with impunity.

No, Pilate didn’t crucify Jesus “for claiming he was the Christ;” he acquiesced to the demands of the Jewish leaders who fomented an insurrection in order to secure the execution of their long-awaited Messiah, and to this the Gospel testifies.

If the mockery of Our Lord and the Holy Catholic faith outlined here upsets you, good, it should, but make no mistake:

What took place yesterday – a man claiming to be pope but acting more as a defense attorney for the Jews than the Vicar of the One whose life they demanded – is nothing new.

This has been the common fare offered by the men in charge in Rome, going all the way to the top, ever since the “elder brothers” effectively took ownership of the Vatican, with the Second Vatican Council – Nostra Aetate in particular – serving as the deed.