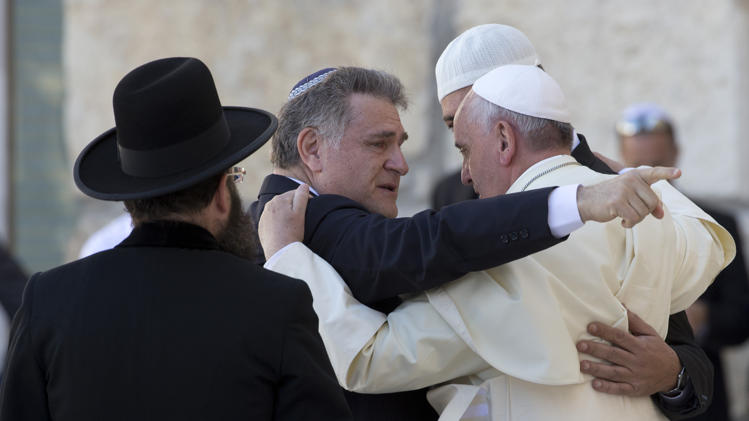 Pope Francis just concluded what is being billed as an “Apostolic Journey” when in truth it was little more than a tour diplomatic; with multiple calls for peace and unity and exactly zero calls for conversion to the one true Faith.

On Monday, May 26th Pope Francis celebrated Mass in the “Upper Room” (aka the Cenacle) delivering a homily centered on the theme of remembrance.

In the Upper Room, the risen Jesus, sent by the Father, bestowed upon the apostles his own Spirit and with his power he sent them forth to renew the face of the earth (cf. Ps 104:30). To go forth, to set out, does not mean to forget.

Well-formed Catholics can hardly fail to recognize the irony of such a statement, coming as it did at the end of a three day papal visit to the Holy Land wherein the Vicar of Christ repeatedly confirmed in their deadly errors those who are exposed to final despair; dwelling in darkness outside of the Catholic Church.

It would appear that Pope Francis, like each of the post-conciliar popes who preceded him, has indeed forgotten one the most important of all things; namely, the very purpose for which the Apostles were sent forth from the Upper Room as evidenced by that which transpired just beyond its doors on the day of Pentecost.

“Let all the house of Israel therefore know assuredly that God has made him both Lord and Christ, this Jesus whom you crucified.” Now when they heard this they were cut to the heart, and said to Peter and the rest of the apostles, “Brethren, what shall we do?” And Peter said to them, “Repent, and be baptized every one of you in the name of Jesus Christ for the forgiveness of your sins; and you shall receive the gift of the Holy Spirit. For the promise is to you and to your children and to all that are far off, every one whom the Lord our God calls to him.” (Acts 2:36-39)

Would that our bishops, including he who resides in Rome, preach so boldly in the name of Our Lord!

Speaking in his Cenacle Mass homily, Pope Francis said, “The Church, in her going forth, preserves the memory of what took place here; the Spirit, the Paraclete, reminds her of every word and every action, and reveals their true meaning.”

The Upper Room speaks to us of service, of Jesus giving the disciples an example by washing their feet …  welcoming, accepting, loving and serving one another … serving the poor, the sick and the outcast, those whom I find difficult, those who annoy me … sharing, fraternity, harmony and peace.

Yes, the Cenacle speaks of many things that the Holy Father considers worthy of remembering; the mission of the Church, however, appears not to be one of them.

Sure, he did manage to make mention of the Eucharist as that which unites us to the Father, but perhaps one might forgive me for holding my applause. I mean he is, after all, the pope.

In any case, the takeaway for non-Catholics, not just in this homily but in the entirety of the Holy Land visit and indeed this pontificate as a whole, is anything but a call to conversion that one may be saved (aka the message they would receive if the mission of the Church such as it was given to her by Christ was actually being carried out.)

All of the Cenacle memories, according to the pope, aren’t entirely pleasant, however.

“The Upper Room, however, also reminds us of pettiness, of curiosity – ‘Who is the traitor?’ – and of betrayal,” he said.

Indeed, and perhaps the solitary “gift” of the past fifty years is precisely this; no more do we, the children of the Church that was born in the Upper Room, have to wonder who the traitor is, as those who betray the Lord from within His inner most circle are delighted to do so in the plain light of day.

Roman Rite Q&A: The Tone of Voice at Mass

How about a March for Christ?