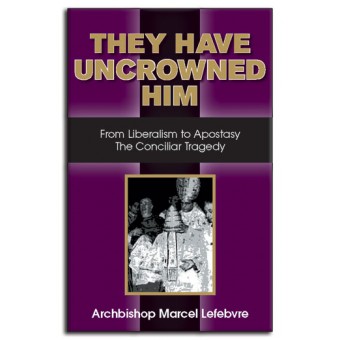 Over the last year or so, I’ve had the pleasure of exchanging a handful of cordial emails with the Australian born theologian, Fr. Brian Harrison, O.S.

Fr. Harrison is a staunch defender of Vatican II, particularly as it relates to the Council’s treatment of religious liberty. In fact, I think it’s fair to say that when it comes to arguments in favor of the alleged doctrinal continuity of Dignitatis Humanae, his are perhaps the best that the so-called “conservatives” have to offer.

Not long ago, Fr. Harrison shared with me his lecture notes for an address that he delivered at an event hosted by Credo St. Louis entitled, “Is Christ still King?” wherein he argues against the allegation put forth by Archbishop Lefebvre, “They have uncrowned Him.”

Upon request, Fr. Harrison has kindly granted me permission to quote one of the central points from his lecture here:

The Church at Vatican II, while never denying her doctrine of Christ’s social kingship, made a prudential  judgment  to place it on the ‘back burner’ in secularized post-Christian Western nations. But that was before they began rejecting even the natural moral law (legalized abortion, euthanasia, homosexual “marriage”, etc.). Now that increasingly hostile power élites have largely frustrated Church leaders’ hopes for fraternal collaboration with secular “men of good will”, the magisterium has begun reaffirming the need for the light of Christian faith in the public square.

So… the Social Kingship of our Lord Jesus Christ hasn’t been formally denied; the doctrine is simply being placed on the “back burner.” That’s it. This is perhaps the most credible defense that the “hermeneutic of continuity” movement can muster on the subject.

Now, that said, let’s be clear… Vatican Council II did not literally uncrown and dethrone Christ; no one can do that. Even so, these figures of speech do adequately describe how our churchmen, including the popes, have been behaving over these last fifty years.

In reality, the Kingship of Christ was never ours to give, nor is it ours to take away. Christ is King. He does have a social reign. It is only for us to avoid preaching the Social Kingship of Christ at our own peril, and that is precisely what we are doing.

As such, I agree with Fr. Harrison; the Council did indeed make a deliberate decision to place the immutable doctrine of Our Lord’s social reign on the back burner. Where Fr. Harrison and I may part company, however, is in our assessment of that decision.

In my view, by placing the Social Kingship of Christ on the back burner, our sacred hierarchs effectively abandoned the mission of the Church.

Scripture itself seems to indicate that it is not truly possible for the Church to carry out her mission apart from proclaiming loudly and clearly that Jesus Christ is King, and that He does indeed reign over society and all of its constituent parts.

In the audio excerpt below, taken from my presentation at the Catholic Identity Conference, I briefly make the case that Sacred Scripture itself attests to the inextricable link between the mission of the Church and the Kingship of Christ, and furthermore, the Church is obligated to preach said Kingship if she has any hope of effectively carrying out that mission.

As something of an excuse (or at least a mitigating factor) in support of those who found it expedient to “back burner” this doctrine, Fr. Harrison suggests that the Church was perhaps blindsided, with the Council Fathers having made this decision “before secularized post-Christian Western nations began rejecting even the natural moral law.”

It is reasonable, however, to consider that it was precisely the Church’s failure to preach the Social Kingship of Christ that brought about the widespread rejection of the natural law in the first place.

In any case, one would be hard pressed to deny that our prelates’ silence on this doctrine, and therefore their failure to proclaim that the empire of Our Lord “includes not only Catholic nations, not only baptized persons, but also all those who are outside the Christian faith; so that truly the whole of mankind is subject to the power of Jesus Christ” (cf Pope Leo XIII, Annum Sacrum), at the very least accelerated society’s decline.

Whatever the cause may be, Fr. Harrison does indeed recognize that secular élites have largely grown hostile in their approach to the Church and even the natural law, and as such, he points out, “the magisterium has begun reaffirming the need for the light of Christian faith in the public square.”

This is all well and good, but it raises an important question: Is it truly possible for the Church “to reaffirm the need for the light of Christian faith in the public square” without once again proclaiming the Social Kingship of Christ?

Clearly, at least in my mind, the answer is no.

And yet, I do not think that Fr. Harrison, or any other reasonable person for that matter, would argue that any of the post-conciliar popes have even tip toed in this water over the last fifty years.

In fact, each and every one of them, from John XXIII all the way up to Francis, have treated the magnificent encyclical of Pope Pius XI, Quas Primas, as if it were a dead letter.

In the book, They Have Uncrowned Him, Archbishop Lefebvre recounts a conversation that took place between himself and Bishop Ambrogio Marchioni (Apostolic Nuncio to Switzerland, 1967 – 1984) as follows:

Archbishop: “But the social Reign of Our Lord Jesus Christ, what are you doing about this?”

Nuncio: “You know, that is impossible now; perhaps in the distant future?… Right now, this Reign is in individuals; we have to open ourselves up to the masses.”

Archbishop: “But the encyclical Quas Primas, what do you do with that?”

Nuncio: “Oh… the Pope would not write that any more, now!”

One may reasonably ask, with the secular world’s hostility to the natural law now plain for all to see, why does the magisterium still steadfastly refuse to proclaim Our Lord’s sovereign rights over society?

The answer, it would seem, is no more complicated than the fact that our popes appear hell bent and determined to sing from the conciliar song sheet no matter how hostile the secular world becomes.

Given the anthropocentric orientation of the Council as a whole, there simply is no room for the Social Kingship of Christ among such men, and even the crumbling visible structures of the Holy Catholic Church, with the numbers of abandoned parishes growing on a near daily basis, isn’t enough to make them reconsider.

In response to my request to quote from his lecture, and having shared with him the excerpt from my Catholic Identity Conference presentation, Fr. Harrison suggested that “in fairness to Vatican Council II,” I should “point out that  Dignitatis Humanae #13 … specifically references in footnote 33 those words you appeal to from the end of Matthew’s Gospel (as well as Mark 16: 15 and Pius XII’s 1939 Encyclical Summi Pontificatus), in order to back up the Church’s claim of a unique right granted by Christ vis-a-vis all temporal rulers.”

The Council’s words are strong and forthright here, implicitly asserting the sovereignty of Christ over all nations, but we now seldom hear them quoted:

“In human society and in the face of any public power whatsoever, the Church claims liberty for herself in her capacity as the spiritual authority established by Christ the Lord, charged by divine mandate with the duty of going into all the world and preaching the Gospel to every creature.”

I’m not entirely sure which governments Father has in mind here, but suffice to say that I reject the suggestion that a State that simply affords the Catholic Church the freedom that is hers by divine right is necessarily “recognizing the validity of the above claim.” Much less can one say that a State that also grants the very same right to the Church’s enemies “would ipso facto be recognizing the Kingship of Christ.”

Besides, an “ipso facto” expression of subjugation to the King is a pathetic substitute for the teaching put forth in Quas Primas which states that “not only private individuals but also rulers and princes are bound to give public honor and obedience to Christ.”

Surely, a government that truly recognizes the Kingship of Christ would not grant, as the Council demands, a civil right to religious freedom to those who reject Jesus Christ and oppose His reign. This would be like a government defending the right of rebels to overthrow it!

Sure, a government that recognizes the Kingship of Christ, and therefore the Holy Catholic Church as the one true faith, might find it necessary to tolerate such false religions in order to avoid a greater evil (as the traditional doctrine states), but never would such a government relinquish its right, and at times its duty, to suppress them even beyond simply attempting to maintain a secular notion of “public order.” (In other words, such a State would not relinquish its duty to safeguard its citizens from spiritual threats at the hands of false religionists.)

In any event, pay close attention to the Council’s words above quoted. In claiming that the Church is “charged by divine mandate with the duty of going into all the world and preaching the Gospel to every creature,” the architects of this document are presenting in this place but a truncated version of her mission.

In spite of giving mention to her mission of “teaching” and “baptizing” in other paragraphs, the takeaway from Dignitatis Humanae is evident enough given the witness of the last fifty years.

The conciliar and post-conciliar popes and the bishops in union with them ask for no more of the State than the right to “preach the Gospel” as if she is called to compete in the marketplace of religious ideas as but one among equals with the many false religions of the world.  As as result, our prelates have been content to see the voice of Christ the King treated as if His is just another opinion that deserves a fair hearing; the implication being that the doctrines of the Holy Catholic Church are of arguably no more service to the common good than that of any other religion or public interest group.

It is interesting that Fr. Harrison not only acknowledges, but even appears perhaps to lament, that those parts of Dignitatis Humanae that merely hint at the Social Kingship of Christ are now seldom quoted, and this in the face of a secular world that is growing increasingly hostile to the eternal law.

As such, I wonder if I might reasonably hope that Fr. Harrison will join me in calling on the Holy Father to proclaim anew the totality of Quas Primas, reaffirming the Sovereign Rights of Christ the King over society such as they were so eloquently articulated by his esteemed predecessor?

The Bergoglian Theory of Relativity