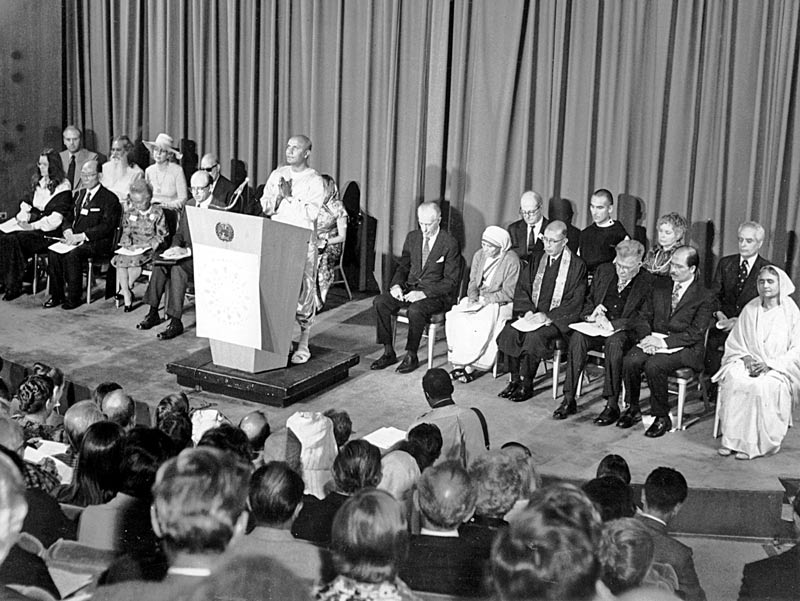 “Spiritaul teacher” Sri Chinmoy opens the first International Interfaith Conference at the UN in October 1975. Mother Teresa can be seen on the right side of the photo, second from the podium.

Starting tomorrow, July 24 and running through July 26, the U.S. Department of State is holding the first (of presumably more to come) so-called “Ministerial to Advance Religious Freedom” in Washington, D.C.

According to a State Department communique:

This event will focus on concrete outcomes that reaffirm international commitments to promote religious freedom and produce real, positive change. The Ministerial will convene a broad range of stakeholders, including foreign ministers, international organization representatives, religious leaders, and civil society representatives, to discuss challenges, identify concrete ways to combat religious persecution and discrimination, and ensure greater respect for religious freedom for all.

The event will be hosted by U.S. Secretary of State Mike Pompeo, who was recently interviewed about the “Ministerial” by Vatican News.

Pompeo indicated that stressing “the importance of religious freedom for every individual around the world” is “a true priority” of the Trump Administration.

Pressing for religious freedom without regard for what is true and what is false, along with a focus on increasing the economic prosperity of impoverished nations?

I’d say Pompeo hit a Bergoglian double; one that suggests that a bit of common ground has been established between Francis (as he is known) and the U.S. President – a man whose policies His Humbleness has openly criticized in the past.

As such, I would not be the least bit surprised if one of Francis’ rambling, syncretistic video messages is shown to attendees at the start of the “Religious Freedom” event.

In any case, the Administration seems to have a reasonable expectation that Rome can be counted upon for support, and who can blame them?

“So we think that the Catholic Church can play an important role in the mission that we’re attempting to achieve through gathering these folks in Washington in the days ahead,” Pompeo said.

Can play an important role in the mission?

Please, the Catholic Church – or better stated, the revolutionaries that dictated the outcome of Vatican Council II and their followers right up to this very day – have been singularly committed to “the mission” of religious syncretism for more than half-a-century.

“People of all faiths should have the right to worship as they please, or if they choose not to, they should be permitted to do that as well,” Pompeo told Vatican News, sounding very much like a post-conciliar pope singing the praises of the Council’s Declaration on Religious Liberty, Dignitatis Humanae, which states:

The council further declares that the right to religious freedom has its foundation in the very dignity of the human person as this dignity is known through the revealed word of God and by reason itself. This right of the human person to religious freedom is to be recognized in the constitutional law whereby society is governed and thus it is to become a civil right … [that] continues to exist even in those who do not live up to their obligation of seeking the truth and adhering to it and the exercise of this right is not to be impeded, provided that just public order be observed. (cf DH 2)

So, where is all of this leading?

The short answer: To the One-World Religion. Bank on it.

In an interview with Family Research Council president Tony Perkins on his “Washington Watch” radio program, Pompeo was asked what he hopes will be the “tangible outcomes” of the gathering, to which he replied:

We expect this to be far more than just talk. We’re hopeful that the State Department can lead a process where religious freedom is raised as a priority for the citizens of every country.

And what if it’s not?

We’ll have our teams in the subsequent weeks and months in the field talking about religious freedom on a continued basis. We’ll have just three days here, but this will be a mission of the State Department every day.

If you’re beginning to sense that the UN is lurking somewhere behind the scenes, there’s a good reason for it.

According to the State Department communique announcing the “Ministerial to Advance Religious Freedom”:

Role of Government: On July 26, government and international organization representatives will participate in plenary sessions focused on: (1) identifying global challenges to religious freedom, (2) developing innovative responses to persecution on the basis of religion, and (3) sharing new commitments to protect religious freedom for all. We have invited authorities from over 80 countries that have a demonstrated record for advancing religious freedom and are committed to promoting Article 18 of the [United Nations’] Universal Declaration of Human Rights (UDHR)…

As subscribers to The Catholic Inquisitor know thanks to Cornelia Ferreira and her magnificent article, The Founding and Progress of the One-World Church, the United Religions Initiative (URI) lies at the heart of the UN’s effort to establish a one-world religion. She writes:

The United Religions (UR) is a work of the United Nations, an occult organization which, as the current seat of world government, has longed worked to unite the world’s religions under its auspices.

Of itself, the United Religions Initiative states:

As reported by Mrs. Ferreira:

[William Swing, Episcopal “bishop” and founder of URI] says, “The UR will be a symbol that people of faith share a profound belief that all of life is interconnected and that unity is worth striving for.” His implied threat is that those who do not subscribe to this “profound belief” (the “fundamentalists”) will be held accountable by the world religious authority — the UR — for causing disunity and strife.

Under President Trump, the United States has had an uneasy, and even adversarial, relationship with the United Nations; a situation that peaked in June when the U.S. withdrew from the UN’s Human Rights Council.

Now, however, with the United States (a military and economic superpower capable of putting the squeeze on those nations that don’t wish to play by the United Religion’s rules) taking the initiative to lead the effort to promote the UHDR’s vision for “freedom of thought, conscience and religion,” which is undeniably ordered toward the establishment of a one-world religion, the UN and the UR may have just landed its enforcement arm.

Truly it can be said that we are living in unprecedented times as rebellious mankind – with the cooperation of Rome, no less – goes about distancing itself from the one true God; inching closer and closer to the creation of a one-world religion within which every nation on earth will be called to worship man himself.  The Catholic Inquisitor  is helping its readers to make sense of these events. Don’t miss out. Subscribe today.