Home
Blog Post
&
Uncategorized
Too many kings in the kingdom 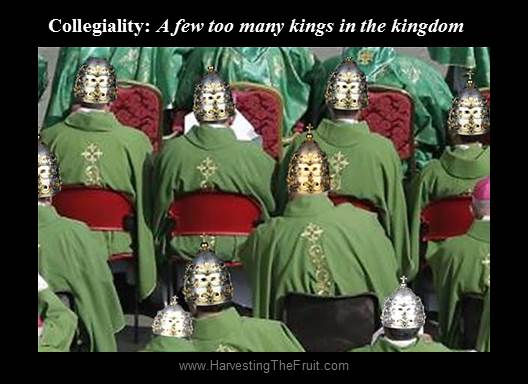 The Synod of Bishops will undergo changes so that it can be “a real and effective instrument of communion which through the collegiality called for by the Second Vatican Council is expressed and realized,” the secretary-general of the Synod told a November 5 press conference.

For those unaware, that’s the same “collegiality” expressed by the Council in the document Lumen Gentium that prompted Pope Paul VI to take the unprecedented step of adding an explanatory note trying to salvage a Catholic understanding of the Roman Pontiff’s supreme authority and the bishops’ relationship with him. (BTW – it obviously didn’t work.)

Don’t you just love how the archbishop tossed in a little Latin so as to lend an air of tradition to the utterly untraditional concept of a democratized Church?

The reform in the Synod, the archbishop said, will involve changes “of both a structural and methodological nature.” While he did not provide details of the Pope’s plans, he said that the Holy Father is determined to enhance the role of the Synod as a means of giving the world’s bishops an active voice in establishing priorities and setting policies for the universal Church.

I’m going to go way out on a limb here and say that the reform of the Roman Curia will involve making the Synod an official part of the Curia; the Congregation for Collegiality, perhaps. Oh, and the papal tiara isn’t coming off the shelf any time soon.

SURPRISE! A “pro-choicer” takes me to task