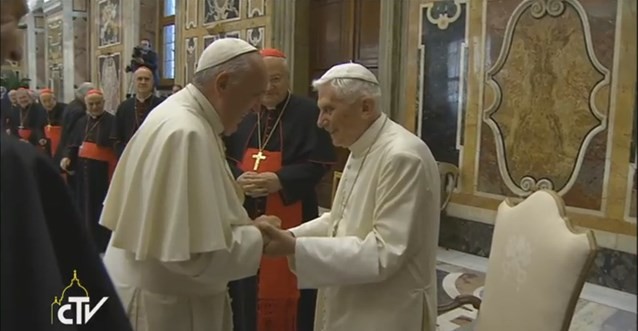 Just days after His Humbleness pledged fidelity to the LGBT movement by stating that Christians must ask forgiveness of gays, the man who paved the way for the scourge on the Church known as Francis addressed the Argentinian menace directly.

At a ceremony marking the 65th anniversary of his ordination to the priesthood, the would-be Pope Contemplatus said to his host:

Your kindness, from the first moment of the election, in every moment of my life here, strikes me, is a source of real inspiration for me. More than in the Vatican Gardens, with their beauty, your goodness is the place where I dwell: I feel protected.

What an odd statement. From exactly what, or whom, does Benedict feel protected?

Certainly there are those who will suggest that I am reading a bit too much into it, but humor me and think about what Benedict said for just a moment…

The security detail surrounding a pope as he traverses the Vatican Gardens is no doubt substantial.

Unlike those times when he travels abroad or is otherwise exposed to large crowds (such as in St. Peter’s Square) the pope is probably never more protected al fresco as he is when he moves about in this relatively small, sheltered area. In fact, I suspect that a pope would have trouble making his way to the gardens without the knowledge and presence of said detail.

This is the analogy that Benedict chose to express the degree to which he feels “protected,” and it raises some serious questions.

Could it be that by “protected” he really means to imply that he feels “captive” in some sense?

Call me a conspiracy theorists if you must, but it’s not as if there is no reason to believe that Benedict’s contact with the outside world is under some considerable control.

Recall, for example, the rather atypical statements recently attributed to him by the Vatican Press Office concerning Fr. Dollinger and the Third Secret of Fatima.

Unless one sincerely believes that Benedict flatly accused his old friend of lying, it must be admitted that the idea of “captivity” isn’t all that far fetched.

Then again, is it possible that what is being “protected” in this case is Benedict’s legacy?

In other words, was Benedict perhaps referring to the privacy of the Vatican Gardens; a refuge of sorts where sensitive conversations can take place and powerful men in the know can share confidences?

With this in mind, did Benedict perhaps have in mind a potentially damaging or highly embarrassing piece of information that is being protected (i.e., kept secret) in return for having stepped aside?

Could it possibly have anything to do with that infamous 300 page dossier detailing the activities of the Vatican’s gay lobby; a report that seems to have magically disappeared?

Whatever the case may be, Benedict concluded his brief remarks to Francis:

“We hope that you will be able to move forward with all of us on this path of Divine Mercy, showing the way of Jesus, to Jesus, to God.”

The most detailed definition of “Divine Mercy” according to Bergoglio is Amoris Laetitia; a document that plainly professes blasphemy and heresy while encouraging sacrilege of the gravest kind.

This is the path down which Benedict hopes Francis will succeed in leading us. Let that sink in for just a moment…

So, looking back on today’s celebration, what have we learned?

Well, certainly more questions than answers exist as to the nature of the “protection” for which Benedict expressed indebtedness to Francis, but there are some things about which we can be rather certain, and none of them are pretty.

For one, Benedict has once again offered irrefutable proof that his Declaratio of 11 February 2013 was an act of deception.

Take a look at the video below. What you will see is an elderly man who has the physical strength to stand without assistance, and the mental acuity to speak cogently without notes (more so than his alleged successor, which isn’t saying much) for nearly five minutes.

In other words, you will see a man who is entirely capable of occupying the Chair of Peter.

So much for the claim, made over three years ago, that the “strength of mind and body” necessary to adequately fulfill the Petrine ministry had deteriorated in Benedict to the point of “incapacity.”

Secondly, and far more importantly, until now, one may have reasonably criticized Benedict for remaining silent as Francis has gone about wreaking mortal havoc in the Church for lo these past three years or so.

Others (the Ratzingerians among us) may have felt justified in defending him on the grounds that by refusing to speak out, he was simply exercising prudence.

Today, however, all of that changed.

For those willing to pay attention, Benedict made it clear that his guilt includes outright complicity in the Bergoglian destruction of the Church; be it forced or otherwise.

In other words, it now seems rather apparent that the “protection” being afforded to Benedict, or whatever other benefits he may think he’s receiving thanks to the “goodness” of Francis, comes at a cost that goes well beyond simply stepping aside and keeping quiet.

In fact, based on the rare, relatively few words that he spoke today, that cost seems to include nothing less than the virtual sale of his soul.

Harsh? You bet, and I’ll explain in a moment, but first…

From angry reader emails to donors withdrawing their support, you would not believe the heat I have taken over the last month or so from certain “Ratzingerians” for daring to hold Benedict accountable for his hand in the current crisis.

While I don’t always get it right, I’ve never taken a stand on this blog with anything in mind other than speaking the truth as best I can; no matter the cost. I’m not about to change course now.

At this, if you’re still with me, ponder the following questions:

While Benedict is in many ways a modernist in his own right, is there any hint whatsoever to be found in the entirety of his pontificate to suggest that he favors the systematic undermining of the immutable practice of the Church with respect to Holy Communion such as it is being perpetrated by Francis under the guise of mercy?

Is there any reason whatsoever to believe that Benedict now regrets the Letter to the Bishops of the Catholic Church Concerning the Reception of Holy Communion by the Divorced and Remarried that he promulgated in 1994 as Prefect of the CDF which states:

In fidelity to the words of Jesus Christ, the Church affirms that a new union cannot be recognised as valid if the preceding marriage was valid. If the divorced are remarried civilly, they find themselves in a situation that objectively contravenes God’s law. Consequently, they cannot receive Holy Communion as long as this situation persists.

Finally, is there any indication that Benedict has had a genuine change of heart concerning the nature of these objective contraventions against God’s law such that he now sincerely believes that “it can no longer simply be said” that those who persist in adultery and fornication “are living in a state of mortal sin and are deprived of sanctifying grace” – Francis’ chosen “path of Divine mercy”?

Obviously, the answer is no.

This puts the Ratzingerians in a rather tough position; either admit that Benedict has abandoned immutable truth in this matter, or admit that he deliberately engaged in an act of deception today when he publicly expressed hope that Francis “will be able to move forward with all of us” on the path just described.

And you know what that means…

A reason to tremble