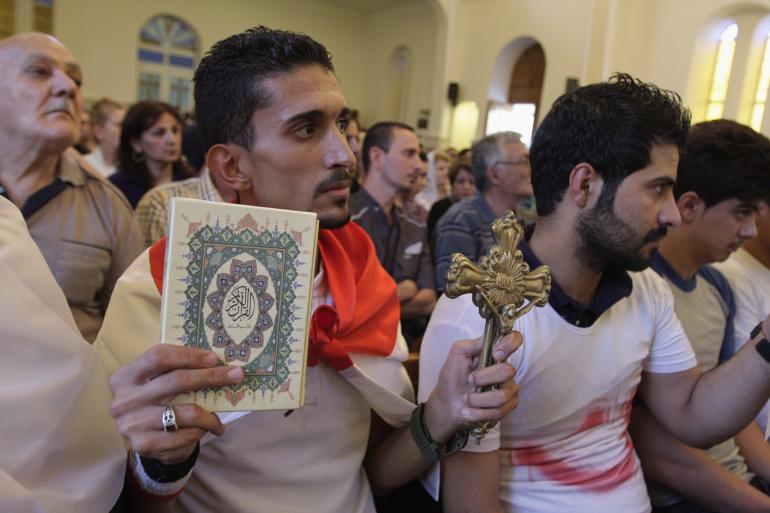 In his Angelus Address on Sunday, August 10th, Pope Francis decried the violence being leveled against Iraqi Christians saying:

The news reports coming from Iraq leave us in dismay and disbelief: thousands of people, including many Christians, driven from their homes in a brutal manner; children dying of thirst and hunger in their flight; women taken and carried off; people massacred; violence every kind; destruction of historical, cultural and religious patrimonies. All this gravely offends God and humanity. Hatred is not to be carried in the name of God! War is not to be waged in the name of God!

The Holy Father went on to “thank those who, with courage, are bringing succor to these brothers and sisters,” and he concluded by expressing his confidence “that an effective political solution on both the international and the local levels may be found to stop these crimes and re-establish the [rule of] law.”

At times such as these, when the spiritual battle that ever rages beyond the veil is made manifest in the here-and-now, it is right for Catholics, and indeed all peoples, to look to the Holy Father for wisdom and guidance.

With the eyes of the world so fixed on Peter’s Successor, imagine what would happen if, in addition to calling for an end to the persecution, Pope Francis were to repeat the encouragement once offered by St. Boniface as recounted in the Encyclical of Pope Pius XII, Ecclesiae Fastos.

After [St. Boniface] had arrived in the northern regions of Friesland and was about to administer the Sacrament of Confirmation to a large number of newly baptized converts, a furious mob of pagans suddenly attacked and threatened to kill them with deadly spears and swords. Then the holy prelate serenely advanced and “forbade his followers to resist, saying, ‘Cease fighting, my children, for we are truly taught by Scripture not to return evil for evil, but rather good. The day we have long desired is now at hand; the hour of our death has come of its own accord. Take strength in the Lord, . . . be courageous and do not be afraid of those who kill the body, for they cannot slay an immortal soul. Rejoice in the Lord, fix the anchor of hope in God, Who will immediately give you an eternal reward and a place in the heavenly court with the angelic choirs’.”

No doubt, if the Holy Father were to invoke such words in order to strengthen the resolve of the persecuted Iraqi Christians unto martyrdom, many throughout the world, including no small number of Catholics, would either be outraged or simply discount his commentary as mere foolishness.

And yet, such would perhaps be the most meaningful, most praiseworthy, and most eminently Catholic encouragement a pope could ever offer such a people.

It goes without say that this is exceedingly unlikely to happen, but even if by some extraordinary operation of grace Pope Francis was moved to so speak, he would largely have himself to blame for whatever negative reactions his words may invite, especially among Catholics.

The unfortunate truth is that Pope Francis has relinquished, and voluntarily so, the moral authority to preach after the manner of St. Paul who said:

The situation in the Church today is not unlike that of a household wherein the father is so irresponsible, so permissive, and so entirely determined to be popular among all that he even goes so far as to get high with his kids and their degenerate friends.

Imagine how the children of the house would react if one day dad suddenly proclaimed, “Just say no to drugs!”

How many would think to themselves, “Gee, maybe the old man has a point worth considering…”

And so it is in the Household of God under the present pontificate, with a Bishop of Rome who appears preoccupied with matters almost entirely earthbound, and whose commitment to universalism is so unbridled as to actively encourage Muslims to cling to their false religion.

Sure, I suppose Pope Francis could, in theory, by a miracle on the order of the raising of Lazurus, suddenly go from the secular media darling in white who couldn’t find room for Our Blessed Lord on his “Top 10 Secrets to Happiness” to a Holy Roman Pontiff who exhorts persecuted Christians to hold fast to the promise of eternal glory in Christ Jesus, even unto martyrdom, but let’s be honest; if he did, could you really blame anyone who failed to take him seriously?

In any event, for whatever it may be worth…

To my Christian brothers and sisters in Iraq, who tremble with fear for themselves and their loved ones as the Muslim agents of Lucifer press upon their doorsteps, I offer the following intention after the example of St. Boniface:

That you may remain in the state of grace.

That at the moment of testing, you may be courageous, taking strength from the Lord, fearing not those who can kill the body but cannot slay the immortal soul.

That you may, by grace, embrace martyrdom with joy if and when it may come your way, confident in the belief that the Lord will grant unto you an eternal reward and a place in the heavenly court.

This, for you, is my prayer.

Taking Francis At His Word