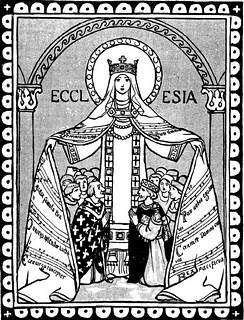 Let’s pick up our discussion of the Novus Ordo with one of the most important points raised in the previous post; namely, the suggestion often put forth by its defenders maintaining that the new Mass can neither be offensive to God, nor threaten to lead those who participate therein away from the Catholic faith, because:

The Church would never give such a rite to the faithful.

In weighing the merits of this noteworthy argument, the question that must be considered is this:

Was the Novus Ordo truly given to the faithful as a gift from Holy Mother Church, and as such deserving of all of the veneration that such origins demand, or was it laid upon the faithful as a burden by mere men of questionable integrity, and therefore subject to the serious scrutiny that may very well lead one to justifiably refrain from participating therein?

Let’s begin by considering how it is that one might come to distinguish between the two, first, as it pertains to the identifying marks that characterize that which comes from Our Holy Mother, the Church.

We can say with absolute confidence that Holy Mother Church, from generation to generation, always and everywhere passes down to her children that which she has received from her Founder and Head, in all integrity, with neither ambiguity nor compromise, much less offensiveness to God, nothing more and nothing less, in particular as it relates to Holy Mass – the Supreme Lex Orandi of the Church.

The Roman Pontiff, of course, plays an important role in safeguarding and facilitating that handing on of that which has been received, as do the bishops in union with him, but we’ll get to that in a moment.

With the identifying marks described above being what they are, anything that is given to the children of the Church that deviates from this high standard of impeccability and purity quite simply cannot be attributed to her with respect to its origins.

As we established in the previous post, there are aspects to the Novus Ordo that very clearly deviate from the unambiguous, uncompromising liturgical tradition of the Church such as it has been handed down throughout the centuries leading up to its introduction.

As such, the Novus Ordo cannot rightly be attributed to Holy Mother Church; i.e., it does not represent that which has been “received and approved” by her (cf Council of Trent, Session VII, Canon XIII), rather its origins must be assigned to mere men – ultimately in this case, Pope Paul VI.

At this, let’s consider the role of the Roman Pontiff as described by Pope Pius XII in Mediator Dei:

“The Sovereign Pontiff alone enjoys the right to recognize and establish any practice touching the worship of God, to introduce and approve new rites, as also to modify those he judges to require modification.” (cf Mediator Dei 58)

Left unstated (perhaps because it is so well understood) is that every right enjoyed by man, even those articulated above with respect to the pope, exist only in relation to corresponding duties.

In the present case, the Supreme Pontiff has the solemn duty of passing along in all integrity that which has been handed down. The Mass is not his to craft according to his own desires, no matter how praiseworthy he believes them to be (e.g., placating heretics unto a false sense of unity).

Sure, the pope may modify certain aspects of liturgical practice, but he does not have the right to deviate from the Lex Orandi that has been given to him.

There is a stark and very obvious difference between the revisions made by Pius XII to the liturgy for Holy Week (which, prudent or not, did not have the effect of confirming heretics in their errors, much less did it lead to a loss of Catholic faith among the flock) and the wholesale fabrication of the new Mass under Paul VI.

Whether or not the former was derelict in his duty vis-à-vis Quo Primum is at the very least debatable, and in any case, of no bearing on the present discussion. The salient point is that one is hard pressed to deny that the latter, Paul VI, is patently guilty of having promulgated what is easily recognizable as a departure from the “received and approved” rite of Holy Mass that he was obligated to hand down.

Look, I realize that this is a bitter pill to swallow, especially for those who have received real blessings from Our Lord within the new Mass (as most of us have), but the simple fact of the matter is that what Cardinal Ratzinger so aptly described as an “on-the-spot product … a fabrication … as in a manufacturing process” is the exact opposite of that which comes from Holy Mother Church.

The Novus Ordo was forced upon the faithful, not as gift but as burden, shaking the Church to her very foundations. This bastard rite has been reeking devastation upon the faithful from the moment of its inception, and its origins are no more glorious than that “on-the-spot” gathering of “experts” known as the Consilium that was established in 1964 during what was without question one of the most disastrous pontificates the Church has ever endured!

Are the faithful obligated, by precept, to participate in the Mass every Sunday and Holy Day – meaning, the Mass that comes from Holy Mother Church; the same that has been handed down throughout the ages and is utterly devoid of any trace of offense against God?

Absolutely. The precept is, after all, an invitation to enter into that which glorifies God and can only do us good.

Are the faithful obligated, by precept, to participate in the Mass every Sunday and Holy Day – meaning, the Mass that comes straight from the hands of an unprincipled pope; a rite that was fabricated in the 1960’s and is anything but devoid of offense against God?

Of course not, as this would render the precept an invitation to enter into that which can do us great harm.

It has been mentioned that nothing exists in the tradition of the Church that might inform the faithful as to how we might rightly behave in such circumstances as these.

There’s a reason for that.

Not only is the present liturgical crisis unprecedented; it would seem that even those Saints and Doctors of the Church who entertained the possibility of a reigning pope falling into heresy never imagined that the Roman Pontiff might one day force a fabricated rite like the Novus Ordo upon the children of the Church.

This is why so many good bishops acquiesced to the Constitution on the Sacred Liturgy, in spite of its “time bombs” as Michael Davies called them; they simply could not imagine that the pope would ever so neglect his duty as to unleash the tragedy that followed.

NB: In anticipation of the argument that Paul VI, in light of the Novus Ordo debacle, could not have been pope, as if the mere fact that the Holy Ghost allowed him to promulgate the bastard rite proves as much, I’ve taken the liberty of starting a thread on the FORUM where that debate can take place. For those interested, please do follow the link and have at it!

The comment section here, however, is for discussion on the points raised in this post about the Novus Ordo.

In conclusion, I would remind you that my purpose in these posts is not to counsel any individual person on how they should behave. There is an aspect to this highly unique crisis in the life of the Church that concerns, not only knowledge, but conscience.

I will, however, state without hesitation that each and every one of us has an obligation to learn our faith and to form our individual consciences well in the matter. That means delving deeply into the kinds of hard questions under discussion here in search of the truth. I very much appreciate everyone’s contribution.

May Christ our Light guide us along the way.

The movement in favor of the traditional liturgy

MISSING: The SSPX’s once militant spirit