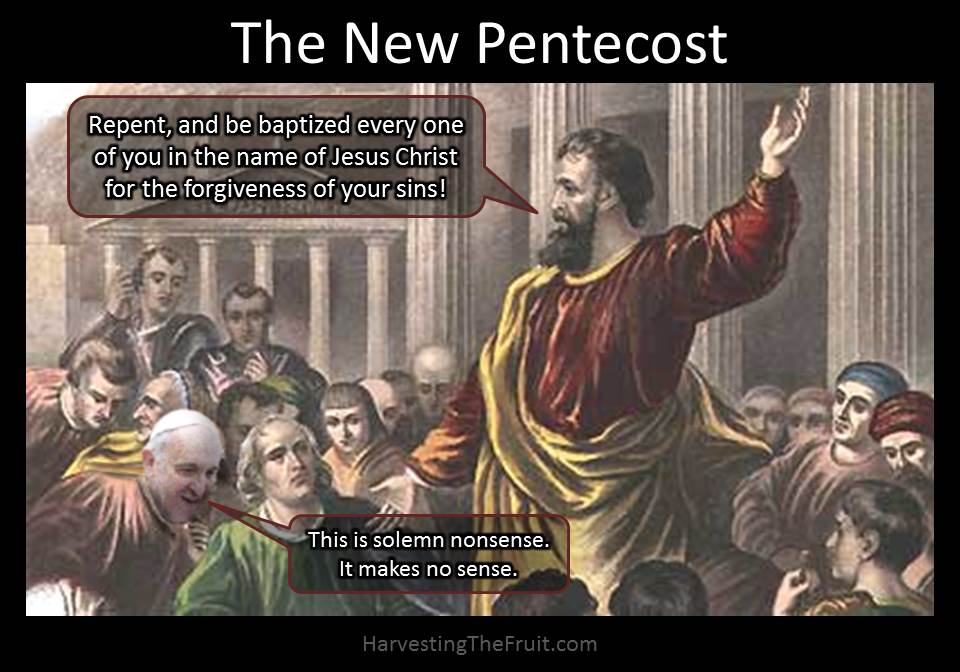 While I’m reasonably certain that most readers of this space remember the big dust-up that ensued when Pope Francis said in his interview with the atheist Eugenio Scalfari, “Proselytism is solemn nonsense, it makes no sense,” please allow me to offer a painful recap.

Traditionalists (otherwise known as Catholics) immediately bristled at these words of the pope, seeing in them a rejection of the mission that Christ gave to his Church.

Their first response was to call into question the accuracy of the text, but Fr. Federico Lombardi stole their thunder by confirming that the text accurately captured the “sense” of the pope’s words, saying that if Pope Francis felt that his thoughts had been “gravely misrepresented” he would have said so.

Further castrating their claims of an accuracy problem was the inconvenient fact that the text was published on the Vatican website.

From there, the wannabe Swiss Guards sought to interpret what the pope said in a Catholic light.

They cited papal tradition dating all the way back to 1995, quoting John Paul the Great Ecumenist who uttered a phrase that seemed to redefine “proselytism” as a matter of “forced conversions.” Why? You’d have to ask him to be certain, but that’s what modernists do; redefine words.

Pope Francis recently raised eyebrows by saying, in an interview, that “proselytism is solemn nonsense, it makes no sense.” This could sound strange since, historically, the word “proselyte” has simply meant a convert, and proselytism has simply meant making converts. Yet the pope was not dismissing the idea of making converts. In fact, evangelization is high on his priority list.

We’ll revisit this claim in a moment, but missing from most of the commentary on the part of the pope’s defenders was any semblance of context.

In the interview, Scalfari said to the pope, “My friends think you want me to convert,” to which the Vicar of Christ replied, “Proselytism is solemn nonsense; it makes no sense.”

Imagine, the pope wanting an atheist to convert!

In any event, nine months have since passed, more than enough time for subsequent events to shed additional light on the matter.

For instance, the interview has since been removed from the Vatican website.

Aha! Obviously, the text was erroneous, one expects the charter members of the FFC (Francis Fan Club) to exclaim.

Which is precisely why Fr. Lombardi was at pains to stress that it was removed by order of the Vatican Secretary of State: I mean, we wouldn’t want anyone to get the impression that the pope’s words were impossible to square with Catholic doctrine, now would we?

More to the point would be the countless words that have since been spoken by the pope in various other venues, including that 50,000 word tome that Cardinal Burke still hasn’t quite figured out in his mind exactly how to describe, Evangelii Gaudium.

Upon review of the pope’s words and deeds since the infamous quote in question was entered into the public record, any sane person would have to conclude that Mr. Akin deserves an A for effort, but an F for content, as one is hard pressed to produce even one single, solitary shred of compelling evidence in support of the claim that making converts occupies any place on any papal to-do list, much less the pope’s list of priorities.

To be very clear: I’m not being facetious.

Not only is there no evidence whatsoever that Pope Francis finds it necessary to encourage non-Catholics to “repent, and be baptized in the name of Jesus Christ for the forgiveness of sins,”  there is copious amounts of evidence to the contrary.

The sad truth that comes to the fore in all of this is nothing new.

Pope Francis isn’t the revolutionary pope of our time; he’s simply one in a line of revolutionary popes who have abandoned the mission of the Church as Christ gave it in favor of that conciliar invention known as the “New Pentecost,” wherein our churchmen engage in religious diplomacy with no intention whatsoever of making converts.