Home
Blog Post
How many “Black Masses” will it take? 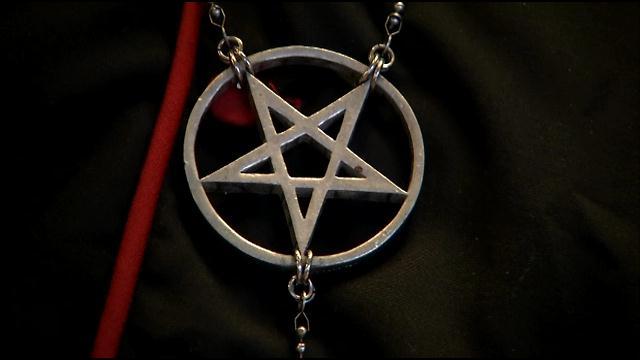 Less than two months after a satanic ritual that was set to take place at a Harvard extension school was cancelled, news of another “Black Mass” is making the rounds; this one scheduled for September 21st at the Oklahoma City Civic Center.

Consider, for example, the statement issued by Most Reverend Paul Coakley, Archbishop of Oklahoma City, who for the record may just have a little “restorationist” blood coursing through his veins (and for this may God protect him).

For more than 1 billion Catholics worldwide and more than 200,000 Catholics in Oklahoma, the Mass is the most sacred of religious rituals. It is the center of Catholic worship and celebrates Jesus Christ’s redemption of the world by his death and resurrection. In particular, the Eucharist – which we believe to be the body, blood, soul and divinity of Jesus Christ – is the source and summit of our faith.

How perfectly American it is to appeal to the numbers of offended persons: This is, after all, a representative republic, and the decision makers need to be made aware that they’re messing with a sizable constituency!

It’s also perfectly American to subtly concede that our faith is not the faith of all who dwell in this great melting pot of ours, which is why, I suppose, the archbishop felt compelled (as modern day churchmen so often are) to preface the objective truth of Our Blessed Lord’s real and substantial presence in the Most Holy Eucharist with the rather polite qualifier, “which we believe…”

You see, we can’t make this issue about Him. No, no, no! We must claim recourse to something with broader appeal, a line of argument that has the potential of resonating with everyone, and that something is, you guessed it, our feelings.

I mean, everyone has feelings, right? And who would want to have their feelings hurt, as naturally they would be, by someone making sport of something that they hold dear.

That’s why we’re astonished and grieved that the Civic Center would promote as entertainment and sell tickets for an event that is very transparently a blasphemous mockery of the Mass. The ‘Black Mass’ that is scheduled for the Civic Center in September is a satanic inversion and distortion of the most sacred beliefs not only of Catholics, but of all Christians.

Again, let’s be very clear: This isn’t about Jesus Christ. It can’t be, you see, because that’s nothing more than the religious belief of a finite number of people, and other people have the right, as a function of their own human dignity, to reject Him.

No one, however, has the power to tell us we’re not offended! That’s why it’s imperative that we make this all about us, our astonishment and our grief.

Therefore, the Archbishop went on:

In a spirit of hope, I ask those who are allowing this event to reconsider whether this is an appropriate use of public space. We trust that community leaders – and, in particular, the board members of the Oklahoma City Civic Center – do not actually wish to enable or encourage such a flagrantly inflammatory event and can surely remedy this situation.

Now, for you civil libertarians out there, don’t be getting your drawers all up in a knot.

Archbishop Coakley isn’t flirting with the Church-State line by invoking the theological virtue of hope by which we aspire to Heaven with trust in Jesus Christ who alone is the way, the truth and the life.

No, he is speaking of that “hope” that belongs even to the heathen; like, “I hope it doesn’t rain during the picnic,” or more specific to the situation at hand, “I hope you’ll think long and hard about your decision to allow others to hurt our feelings.”

That said, at this point in the statement, it gets real:

If the event does move forward, we will have to consider other peaceful, prayerful and respectful options to demonstrate our opposition to this publicly supported sacrilegious act.

You think Divine wrath is bad? Just you wait till we respectfully demonstrate!

That, my friends, isn’t a threat; it’s a promise. If the people in charge proceed to hurt our feelings, well then, we’ll have no choice but to peaceably assemble to make known just how offended we are, as is our First Amendment right to do.

Of course, we all hope (in the same sense invoked in the statement) it doesn’t come to this, however…

In the meantime, I call on all Catholics in central and western Oklahoma – as well as all men and women of good will – to pray for a renewed sense of the sacred and, in particular, to pray that the Lord might change the hearts and minds of the organizers of this event.

It’s not immediately clear to whom or what “men and women of good will” who happen not to be Catholic are going to pray. Arguably, some of them will call on the one, true God; others, I suppose, might call on the “Universal Energy” or some other figment of an imagination left unaided by the Successors of the Apostles in our day who dare not profess the objective truth about who God is.

Yes, I know… It may appear to some that I am being unreasonably hard on Archbishop Coakley. It bears mention, however, (for the benefit of those who are likewise infected with an undue focus on emotion) that I am really just being justifiably hard on his weak defense of Our Lord Jesus Christ; not him personally.

Truth be known, I admire Archbishop Coakley, if for no other reason than his obvious attachment to a certain “kind of fashion” as evidenced by his willingness to ordain priests in the traditional Latin rite. (See restorationist link above.)

At the heart of the matter lies the Second Vatican Council’s treatment of religious liberty as expressed in the document Dignitatis Humanae, according to which everyone, including those would dare to desecrate the Blessed Sacrament, have a “right to religious freedom that has its foundation in the very dignity of the human person.” (DH 2)

We understand God one way; they understand Him another way. We worship our way, they worship their way. That’s what makes the conciliar world go ‘round.

This presumably is why the archbishop is so entirely focused on [queue up that sappy sentimental song from the 1970’s] feelings, nothing more than feelings…

The Council Fathers placed no limiting factors on the supposed “right” to practice the religion of one’s choosing without restraint, even as it pertains to those who would carry out an act so offensive to Christ as desecrating the Eucharist, beyond the following:

“This right exists even in those who do not live up to their obligation of seeking the truth and adhering to it and the exercise of this right is not to be impeded, provided that just public order be observed.” (ibid.)

With this in mind, as long as that “Black Mass” is carried out peacefully, who the hell are we to complain?

The Council’s answer: We are just one group of people with a right to religious liberty among many such groups; i.e., we are no one to complain of the “religious” activities of another.

The unsavory truth that should be coming into sharper focus is that Dignitatis Humanae set the stage for this terrible situation by effectively proposing that damn near anything called “religion” should be protected, nay, held sacred, by the State; the same that would “clearly transgress the limits set to its power, were it to presume to command or inhibit such acts.” (cf DH 3)

As the date for the Black Mass at Harvard approached, I wondered aloud if events such as this might in some way serve to open the eyes of our bishops, and others, to the grave disservice Dignitatis Humanae has done to Christ, His Church, and indeed the whole of society.

At this point, it’s safe to say we have a long way, and God only knows how many more Black Masses, still to go.

A Soldier for Christ

T minus one week…