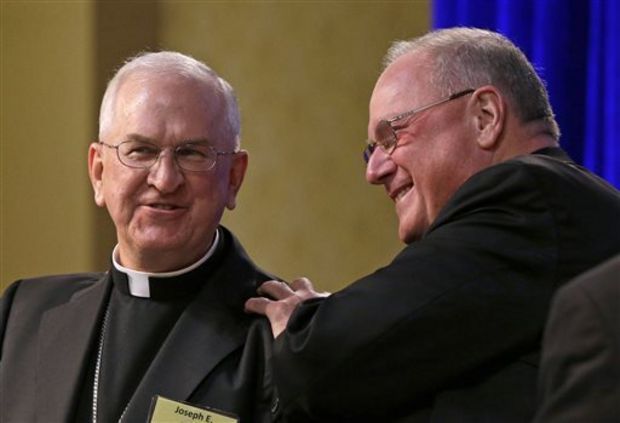 The USCCB has a new leader, Archbishop Joseph Kurtz, and that apparently means a somewhat new approach to the Obama Administration’s overreach known as the HHS mandate.

In a January 6th editorial published by Religion News Service, Archbishop Kurtz made the case for a Catholic exemption in a 700 word essay that, unlike his New Year’s Eve letter to President Obama, doesn’t mention “our first freedom” even once. Praise God!

A step in the right direction, you say?

No, not even close; it’s really just another dance move on the part of a bishops’ conference that has long since committed itself to sidestepping the Church’s mission, and you’ll never guess who provided the inspiration for this latest episcopal pirouette…

According to the Archbishop:

Pope Francis inspires Catholics and non-Catholics alike with his focus on the gospel call to serve “the least of these.”

Our faith calls us to put first the needs of our brothers and sisters who suffer in poverty, and Catholics are justly proud of our network of schools, hospitals and social service ministries that work every day to help the poor and vulnerable.

Correction: Our faith calls us to put first our duty toward Almighty God and His Divine Law. Remember Him?

If you’re looking for evidence of a “Francis Effect,” here you go. Remember, this isn’t your great granddaddy’s Church, this is the Bergoglian Church, an institution whose most urgent problems are youth unemployment and the loneliness of the elderly.

You can read the rest of the editorial on the RNS site, but the gist of the archbishop’s appeal for an exemption is summed up as follows:

The mandate went into effect on Jan. 1; ministries now are faced with the choice of violating our deeply held beliefs or paying crippling fines … If these ministries don’t comply, the financial penalties may mean that some may have to close their doors. As that happens, the poor and those who serve them will be hurt the most.

So, you see, the problem with the HHS mandate isn’t that it violates the Divine Law to which every human being is beholden, thereby jeopardizing the salvation of souls; no, the real issue is that it just might stand in the way of the Church’s ability to meet the temporal needs of the poor.

Now, don’t get me wrong, corporal works of mercy are important, but according to the priorities on display here, wherein spiritual works of mercy don’t even merit a passing mention, the plea of Archbishop Kurtz can essentially be reduced to:

“Thumb your nose at Christ the King, ignore the Divine Law, and undermine the eternal salvation of an entire nation, Mr. President, but whatever you do, please give us the freedom to see to it that the poor go to Hell fat and happy!”

In fairness, the atrophic testicularitis that has turned the overwhelming majority of Catholic bishops into a bouquet of shrinking violets far too timid to even hint at objective moral truths in the face of godless civil authorities didn’t just arrive on the scene with Archbishop Kurtz and his brother bishop from the Diocese of Rome.

That said, the latter has done a magnificent job of creating an ideal environment for it to spread like H1N1 in a Piper Cub, and the former appears all-too-happy to play the pilot.

In November of 2012, shortly after the Second Coming of Obama was confirmed on Election Day, I wrote:

As difficult as it may be to accept, the anti-Christian oppressor and purveyor of evil extraordinaire, Barrack Hussein Obama, is precisely what the American people and the Church that has failed to properly form them deserves. Yes, deserves. And in that day when the degradation to which this president intends to enslave us becomes more than we can bear, the Lord will not answer our cries because justice demands otherwise. This, my friends, is the price that an entire nation has to pay for the failure of the Catholic Church in our day to faithfully perform its divinely-assigned duty.

I stand by that assessment today and urge Archbishop Kurtz and the USCCB to abandon all efforts to calculate any response to the Administration beyond, “We must obey God rather than man.”