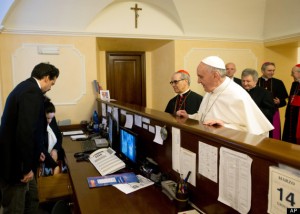 Pope Francis has been Roman Pontiff for just a few weeks, and already we’ve witnessed any number of noteworthy acts that the media, both Catholic and otherwise, feels compelled to report as never before seen acts of papal humility.

With Aquinas’ definition in mind, many of the things that others are applauding don’t seem to me to be examples of “keeping oneself within one’s own bounds, not reaching out to things above one, but submitting to one’s superior,” (especially when one considers that the pope’s superiors are Christ the King and the Church that He established).

– Choosing to withhold the Sign of the Cross and the invocation of the Blessed Trinity (otherwise known as the Apostolic Blessing) from those gathered in a papal audience, as though this is a sign of respect for non-Catholics

– The numerous ways in which he has already enforced his own personal preference to eschew certain sacred signs associated with the papacy, including relinquishing the elevated throne when meeting with the leaders of false religions

If these are examples of humble submission, I’m St. Francis de Sales reincarnated.

Now, that is not to say that Jorge Bergoglio the man is not humble. I have every reason to believe that he is, but even so, the tendency to hail his every last move as an act of “deep humility” is getting out of hand.

All of which raises a question:

At what point does humility-on-parade become something altogether different?