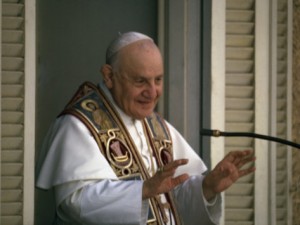 I’ve recently been reading about the phenomenological method employed by the Council Fathers of Vatican II as elucidated by Dr. Paul Zarowny in a review of the book, Vatican II, Theophany and the Phenomenon of Man: The Council’s Pastoral Servant Leader Theology for the Third Millennium, by Passionist priest Fr. John F. Kobler (American University Studies, Series 7, vol. 100).

Although the article is a bit dated, Dr. Zarowny’s insights seem to shed some light on the difficulties associated with interpreting and implementing the Council’ teachings.

First, a working definition is in order.

According to the Stanford Encyclopedia of Philosophy:

In other words, the phenomenological approach to defining the essence of any given thing requires that one suspend all previously considered knowledge of the object, so that it may be considered anew from the standpoint of encounter and experience.

In the present case, as it relates to the Second Vatican Council, Dr. Zarowny states:

According to Kobler, the bishops set to the side all that they had previously known about the Catholic Church and looked at it as an experienced phenomenon — that is, as an object of sense perception.  Previously the Church had usually been thought of as the Mystical Body of Christ, the Bride of Christ or the Kingdom.  But these concepts were otherworldly, triumphal, and not perceivable as sense phenomena.  Hence the bishops, adopting a suggestion made by Dom Anscar Vonier, O.S.B. in 1937, decided that what one can objectively say about the Church is that it is a group of People who are united by their belief and worship of God — a People of God.

As for what motivated the Council Fathers to take such an approach to the task given them by Pope John XXIII; namely, to impart the truths of the Catholic faith to the people of the “modern” world “with precision, in full and complete conformity to the authentic doctrine” (cf Opening Address of Pope John XXIII to the Second Vatican Council),  Dr. Zarowny states:

The Council’s idea was that if Catholics renewed their lives by taking a fresh phenomenological look at the Gospel message they would set such an example of love and understanding that non-Catholics throughout the world would be amazed, think “Why don’t we act more like those Catholics?” and follow their lead.  Then the Cold War would cease, the nuclear arms race would end, the gap between the haves and have-nots would narrow, materialism would wane, and humanity would be transformed.  Mankind’s evolution would be advanced — not by biology, but by social action.

Apparently missing from the minds of those bishops who were inclined to entertain such wishful thinking was an abiding awareness of man’s sinfulness. As such, the risk inadvertently invited in the process was perhaps unanticipated; namely, that the emphasis on “experience” and “example” would serve not so much to open inroads for converting the world to Christ, as to create pathways wherein the Church and her children would be overcome by the temptation to worldliness.

With the philosophical thrust of the Council’s evangelical method so intently focused on the value of experience, it is ironic indeed that those who continue to cling to the promise of a “new springtime,” while simultaneously imputing an undeserved degree of impeccability to the conciliar text, are so loathe to acknowledge the undeniable witness of the near universal experience of every Catholic the world over; namely, priest shortages, professed religious communities in ruins, empty pews, rampant public dissent, parish closings, etc.

Toward the end of his book review, Dr. Zarowny quotes Fr. Kobler:

Assuming for the moment that this phenomenological interpretation of Vatican II is in substance correct, we find ourselves confronted with an enormous practical problem.  Our present intellectual tools for dealing with the magnitude of the Council’s religious and pastoral enterprise are woefully underdeveloped!  The inadequacy of our intellectual tools suggests that we are morally ill-equipped to grapple with the contemporary crisis of mankind in a significant way.  However dismaying, or even utopian, the pastoral program of Vatican II may appear, reflection on today’s dislocated world tells us it is a necessary one.

So, we are supposed to believe that the real problem concerning the interpretation and implementation of the Council documents lies in the fact that the post-conciliar hierarchy has largely been devoid of men who possess the same kind of soaring intellect that it took to produce them!

I suppose it never occurred to Fr. Kobler that the brilliant minds that debated and approved the conciliar texts are the very same men who presided over the bedlam that ensued in the years immediately following the Council.

In any event, I’m not buying the suggestion that post-conciliar man simply isn’t bright enough to recognize, much less match, the Council’s brilliance.

While the Emperor may not be buck naked in this case, some of his garments are stained to the point of embarrassing the entire Kingdom, and until we acknowledge as much as it relates to the documents of the Council, the Church will remain stuck in the throes of the now decades long winter that followed it.