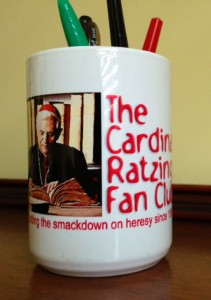 Not that many years ago, however, the word “groupie” would call to mind images of emotional throngs hysterically shedding tears and bleating out shouts of devotion toward a chosen pop star or musical group, like Bon Jovi, the Beatles or U2.

Nowadays when I hear that word, I’m more inclined to think of irrational Catholics breathlessly extolling the virtues of men like Popes Paul VI, John Paul II and Francis.

No, groupies aren’t just for rock bands; they’re for prelates too.

As I’ve stated publicly in the past, the Lord has given me the courage to change the things I can, and as a recovering conservative Catholic, I feel compelled to man-up and admit that I was once showing symptoms of clerical hero worship back in the day.

In fact, sitting on my desk as a stark reminder even now is the coffee mug (pictured here) bearing the image of then Prefect of the Congregation for the Doctrine of the Faith, Cardinal Ratzinger, with the caption, “Putting the smackdown on heresy since 1981.”

St. Paul certainly witnessed this problem in his own day, and he took pains to correct it.

For when one says, “I belong to Paul,” and another, “I belong to Apol’los,” are you not merely men? What then is Apol’los? What is Paul? Servants through whom you believed, as the Lord assigned to each. (1 Cor 3:4-5)

Even though this phenomenon is as old as the Church itself, it first caught my attention in April of 2005 shortly after chants of “santo subito!” started ringing out in St. Peter’s Square.

Since then, the cult of papal personalities, not to mention the irrationality of the groupies associated with it, appear to be on the rise.

Try telling an otherwise well-grounded Catholic that Pope Paul VI heaped upon the children of the Church a grave injustice in the way he presided over the destruction of the sacred liturgy, and you’ll be greeted with mindless refrains about validity.

Dare pointing out this same Pontiff’s foolhardiness for giving the world a reason to suspect that he was prepared to change the Church’s already infallible teaching on contraception by appointing a commission to “study” the matter, and you might just be treated a wild eyed diatribe about crowning achievements, prophetic proclamations and Humanae Vitae. 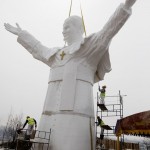 If you’re up for some real commotion, share with one of the benefactors behind a certain 45 foot tall monstrosity being erected in Poland (pictured here) the opinion that the man it represents did more to promote religious indifferentism than any pope of the last several centuries thanks to such inexplicably egregious acts as venerating the Qur’an and hosting not one, but two, ecumenical love-ins at Assisi, and see how long it takes before he makes reference to “John Paul the Great.”

Oh, and if you’re really feeling feisty, try suggesting to just about anyone working in your local parish office that Pope Francis has invited turmoil thanks to his treatment of the Church’s liturgical laws, to say nothing of his apparent determination to tailor the externals of the papacy to suit his own personal tastes, and if you’re lucky enough to avoid bodily harm, you may hear quoted “With John Paul II, we had a pope who became a saint; with Francis, we have a saint who was elected pope” (Pious rumination by Antonio Gaspari, Zenit News Agency).

Not only is it obvious (at least to me) that vast numbers of Catholics have lost sight of St. Paul’s admonition against such cult-like devotion to human beings, even those in high ecclesiastical office, it’s also readily apparent that we’ve lost sight of his example:

But when Peter came to Antioch I opposed him to his face, because he stood blameworthy (Galatians 2:11).

The bottom line is this: As Catholics, we are called to recognize, honor and esteem with due reverence the Petrine Office; we are not called to blindly embrace as “pearls of great price” every last word and action associated with the man who occupies it.

Seriously, is this distinction really that difficult to comprehend?

SURPRISE! A “pro-choicer” takes me to task