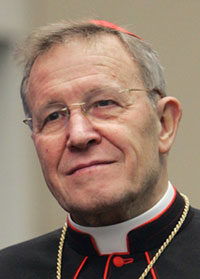 L’Osservatore Romano has published an article by Cardinal Walter Kasper (4/12/2013) in which the prelate states that Pope Francis is launching a new phase in the implementation of the Second Vatican Council.

While one may be tempted to discount the Cardinal’s comments as idol speculation, readers may wish to reconsider based upon the fact that Pope Francis  gave special mention to Cardinal Kasper during his first Sunday Angelus, calling him “a talented and good theologian.”

In any case, let’s look at what the former President of the Pontifical Council for Promoting Christian Unity had to say in an English translation of Cardinal Kasper’s article provided by CNS writer John Thavis.

With regard to Pope Francis’ emphasis on “a church that becomes poor and serves the poor,” (whatever the heck that means) Kasper said:

“In this sense, Pope Francis from the first day of his pontificate has given what I would call his prophetic interpretation of the council, and has inaugurated a new phase of its reception. He has changed the agenda: at the top are the problems of the Southern hemisphere … At the beginning of the last century, only a quarter of Catholics lived outside Europe; today only a quarter live in Europe and more than two-thirds of Catholics live in the Southern hemisphere, where the church is growing.”

I for one find it very interesting when aging prelates speak of the changing demographics of the Church, particularly as it relates to the decimation of the Faith, as if this is the result of some random natural occurrence that couldn’t possibly be related to the the way in which they exercised the duties of their exalted offices.

That aside, the very notion that the Roman Pontiff’s attention should be focused on those places where “the church [sic] is growing” is exactly backwards. It’s like saying that a physician does well to pay special attention to those parts of the body that are healthy while giving short shrift to those diseased members that are killing the patient.

Even so, I would bet gold bullion to Argentine Pesos that claims of the Church thriving in the Southern Hemisphere are greatly exaggerated, based as they are on mere census figures that say nothing whatsoever about the actual state of the Church.

According to Thavis, “Cardinal Kasper also noted that Pope Francis appears to be open to a more collegial exercise of papal authority. The role of the pope as a unifying figure in the church should not lead to an ‘exaggerated centralism.'”

“Therefore it was very significant that Pope Francis made reference to the bishop of Rome who presides in charity, echoing the famous statement of Ignatius of Antioch. This is of fundamental importance, not only for the continuation of ecumenical dialogue, above all with Orthodox churches, but also for the Catholic Church itself.”

Cardinal Kasper may be on to something here. Those at war with the doctrine of papal primacy, including champions of that thinly veiled attempt to democratize the Church known as “collegiality,” have long been keen to cite Ignatius of Antioch’s statement about the Church of Rome “presiding in agape.”

Does the Holy Father’s use of this quote give us a glimpse into his mind? I don’t know, but it certainly does seem as though he is rather fond of referring to himself as “Bishop of Rome” as opposed to Roman Pontiff or any other title that reflects his monarchical authority, to say nothing of his obvious distaste for those outward signs that point to the same.

In any event, one would do well to keep in mind that papal primacy as understood in the Early Church is well demonstrated in the First Epistle of Clement, which happens to predate Ignatius of Antioch, wherein Rome clearly asserts authority over the Church of Corinth, even going so far as to admonish the blameworthy in the name of God.

Moving on, Cardinal Kasper shows some surprising moments of clarity, even as he clings to the fuzzy-headed logic of liberalism:

“For most Catholics, the developments put in motion by the council are part of the church’s daily life. But what they are experiencing is not the great new beginning nor the springtime of the church, which were expected at that time, but rather a church that has a wintery look, and shows clear signs of crisis.”

But just when one might be tempted to think that Cardinal Kasper is waking up to the fact that the Council contributed to infecting the Church with worldliness, he hints that the Church isn’t quite worldly enough!

“The church needs to take seriously the legitimate requests of the modern age,” Kasper asserted.

According to Thavis, Cardinal Kasper soberly admits that one of the reasons the Vatican II documents have “an enormous potential for conflict is that compromise language was adopted on many crucial issues, opening the door to selective interpretation in one direction or another.”

Bravo! It’s about time we came to terms with the deficiency of the Council’s linguistic approach.

Ah, but then he goes and follows up by offering one of those all-too-common fairy tale assessments of the Council’s impact on Catholic life, saying, “Overall, Vatican II teachings have given new impetus to life in dioceses, parishes and religious communities, especially through liturgical renewal, new spiritual movements, better knowledge of Scripture and dialogue with non-Catholics.”

So, let me see if I got this right…