As reported by Vatican Radio, in his homily of April 16, Pope Francis declared, “The Council was a beautiful work of the Holy Spirit.”

He then went on to ask, rhetorically, “But, after 50 years, have we done everything that the Holy Spirit told us in the Council? In the continuity of the growth of the Church that the Council was? No. We celebrate this anniversary, we make a monument, but do not bother. We do not want to change. And there is more: there are calls [voci, also ‘voices’] wanting to move back.”

It isn’t explicitly clear who the Holy Father intended to criticize, but presumably he means people like me (and arguably his predecessor) who place a very highly value on everything associated with the Church’s venerable liturgical tradition (to say nothing of her current liturgical laws) and who want desperately to “move back” to a papacy that doesn’t shy away from its own monarchical authority, as well as a Church that isn’t afraid to proclaim the Kingship of Christ as once she did before the Council. 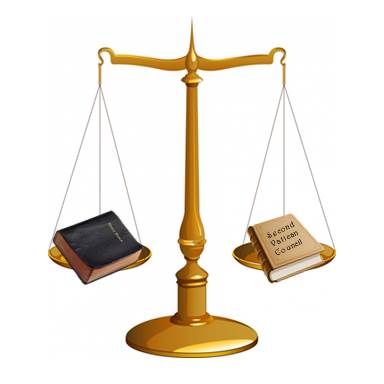 One cannot but acknowledge that the Holy Father is making an exceedingly lofty (and quite frankly, disturbing) suggestion; namely, that the entirety of Vatican Council II can reasonably be attributed to the work and the will of the Holy Spirit.

Taken at face value, Pope Francis’ proclamation would seem to suggest he believes that the decrees of Vatican II should be received, for all intents and purposes, as if their weight ascends nearly to the level of Divine Revelation!

This is quite a turn of events (or one might say a posture of discontinuity) when one considers the warning that Cardinal Ratzinger delivered to the bishops of Chile in 1988:

“The truth is that this particular Council defined no dogma at all, and deliberately chose to remain on a modest level, as a merely pastoral council; and yet many treat it as though it had made itself into a sort of superdogma which takes away the importance of all the rest.”

Oh well, perhaps this is really a good sign.

Maybe this means that the Holy Father is going to use his sovereign authority to legislate the return of the Latin language and Gregorian chant to their rightful place in the sacred liturgy as it is celebrated the world over, just as the Council decreed.

Or maybe this means that he is going to call for an end to all of those ridiculous innovations in the liturgy that the Council never suggested, like free-standing altars, Mass facing the people, Communion in the hand and Extraordinary ministers too numerous to number.

I guess we’ll just have to wait and see.