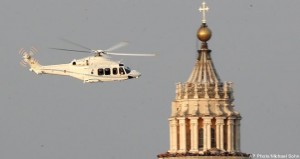 Even before the elevation of Cardinal Bergoglio to the Chair of St. Peter, I was growing increasingly weary of people playing the “humility” card. (Now, it’s pretty safe to say that my irritation level with this is over the top, but I’ll save that for another post on another day.)

“The virtue of humility consists in keeping oneself within one’s own bounds, not reaching out to things above one, but submitting to one’s superior” (St. Thomas Aquinas).

I have no difficulty whatsoever believing that Pope Benedict’s intentions in renouncing the papacy were good; i.e., I believe that he believed that this was God’s will.

That, however, is about as far as I can reasonably go.

Even so, emotionally charged Catholics still continue to point to Pope Benedict’s abdication as a glowing example of deep humility.

Pope Benedict by all indications is a trusting soul, so much so that he was taken aback by the level of vitriol intoned by those who oppose him. (Can anyone forget the shock and sadness conveyed in the Holy Father’s words when he addressed the attacks that he endured over the Bishop Williamson affair?)

Maybe his abdication is really an illustration of how a gentle man who is personally very holy can be beaten down by his enemies, even to the point where spiritual fatigue leads him to making the terrible mistake of abandoning his family.

I, for one, am inclined to believe that this is the case.