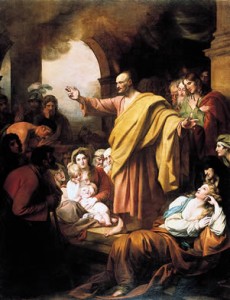 We talk about what it is, why it has to happen, and when we’re going to do it.

We talk about pastoral plans and paradigms; discipleship and dialogue; inculturation; integration and communities confronting change in close collaboration.

And then what do we do?

We synchronize our schedules so we can make plans to get together to talk about it some more.

Has anyone else noticed that the Church in recent decades generates a ton of process for every ounce of product?

The modern day episcopate, with its staggering array of secretariats and sub-committees, has become a case study in progressive bureaucraticism: a brain trust of elites who frenetically prepare for the sake of preparedness, ultimately offering ruminations and reflections that yield little more than some fleeting warm and fuzzies and a false sense of accomplishment on the part of those involved.

Where once the Apostles urged the enemies of the Lord to conversion and to do penance and to save themselves and their children from the perverse generation in which they lived, their successors often seem content to engage in the meaningless platitudes of religious diplomacy.

By all appearances, the newest thing about the New Evangelization is that no one ever really seems to get around to evangelizing any more.

Apparently, Pope Francis sees it too, and he believes that it’s time for a wake-up call.

From this standpoint, the Holy Father’s personal actions and his call for the Church to “go to the peripheries” (issued in the pre-conclave intervention that he made during the General Congregation of Cardinals) makes sense as the result of the status quo – empty pews, parish closings and dwindling vocations – are all too well known.

That said, stripping the Church, and the papacy in particular, of all external pomp, majestic ceremony and the assorted regalia associated with it is not the answer either.

The Church (and the Successors of Peter) do well when evangelizing as the Apostles (and St. Peter) evangelized.

If we’re honest, we have to admit that we have we wandered far off course in recent decades.

So far, that if the Vatican’s Public Relations arm of today was around at the time of Pentecost, there can be no doubt that a statement would have been issued before sunset apologizing to the Jews for St. Peter’s anti-Semitism. (I wish that were a joke. It’s not.)

Perhaps the following passage from the Acts of the Apostles will help us regain the evangelical perspective we need vis-à-vis the poor :

Now in these days when the disciples were increasing in number, the Hellenists murmured against the Hebrews because their widows were neglected in the daily distribution.  And the twelve summoned the body of the disciples and said, “It is not right that we should give up preaching the word of God to serve tables.  Therefore, brethren, pick out from among you seven men of good repute, full of the Spirit and of wisdom, whom we may appoint to this duty.  But we will devote ourselves to prayer and to the ministry of the word.” (Acts 6:1-4)

Yes, the Apostles had great concern for the care of the poor, the widows and the neglected of society, but they would not allow the needs of those who will always be with us to distract them from their proper mission of proclaiming the Good News and conversion to Him who is the fullness of truth and the only way to everlasting life, lest they should get lost in simply doing “good works” that appear only to compete for the world’s attention among the “random acts of kindness” performed by the Lord’s enemies.

Concerning Russia’s errors: What are we to do now?

Is the Novus Ordo Missae Catholic?