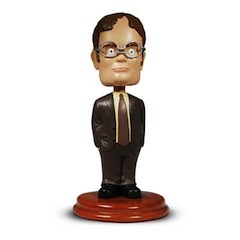 On Good Friday, Preacher of the Pontifical Household, Fr. Raniero Cantalamessa, gave a homily during the celebration of the Passion of the Lord in St. Peter’s Basilica.

As I read the text of Fr. Cantalamessa’s refleciton, one part in particular conjured up the images of two totally unrelated people; one fictional, the other a great saint.

The operative part of the homily, which was focused on the work of evangelzation, reads:

“We know what the impediments are that can restrain the messenger: dividing walls, starting with those that separate the various Christian churches from one another, the excess of bureaucracy, the residue of past ceremonials, laws and disputes, now only debris.”

My first thought upon reading this was, “You can bet your golden thurifer he wouldn’t have spoken of ‘past ceremonials’ like that in the presence of Pope Benedict XVI!”

And then a character from the television sitcom, The Office, came to mind; Dwight Schrute, the stereotypical “yes man” who rarely fails to tell the boss just exactly what he wants to hear.

“Ha!” I laughed to myself, “Well played Fr. Cantalamessa! You get the corner office with a view!”

And then a far more serious image came to mind, that of Pope St. Pius X who first used the phrase “active participation” in the context of restoring “the decorum and sanctity of sacred functions,” a Roman Pontiff who recognized in “past ceremonials” the great treasure that modernists cavalierly dismiss as mere “debris.”

The former Cardinal Giuseppe Sarto was a simple and humble man, a roll-up-your-sleeves kind of bishop who was even known to ball up his fists to knock some sense into the more hardheaded of the priests that he served so well as a spiritual father.

The pomp and ceremony of the papal court was so utterly foreign to the personal taste of Pope Pius X, that in tears he once said to close friends, “Look how they have dressed me up! It is a penance to be forced to accept all these practices.”

And yet he accepted them. Why? Because he knew that the “past ceremonials” that came with the office were not his to destroy; rather, were they his to protect, that they might continue to draw the attention of mankind toward Christ their Benevolent King.

If this were not sobering enough, I could almost hear the voice of Pope St. Pius X expounding upon the errors of the modernists; words that ring out all the more clearly today, like a warning shot fired across the century:

Their general directions for the Church may be put in this way: Since the end of the Church is entirely spiritual, the religious authority should strip itself of all that external pomp which adorns it in the eyes of the public. And here they forget that while religion is essentially for the soul, it is not exclusively for the soul, and that the honour paid to authority is reflected back on Jesus Christ who instituted it. (Pope St. Pius X, Pascendi Domenici Gregis)